Why do particles from a comet that result in meteor showers spread out mostly along the comet's orbit?

My understanding of the meteor showers that repeat yearly is that the Earth passes through the orbit of a comet that is nowhere near us, and might not even exist anymore, yet it's orbit is filled with a stream of dust in the same heliocentric orbit by way ahead of or behind their cometary source by tens of millions of kilometers or more.

How do these particles spread out along the comet's orbit so far and yet remain tightly correlated transverse to the orbit? Some meteor showers like the "Unicorn shower" linked below can be quite short, lasting only a fraction of a day!

Left: From What (actually) is Jupiter doing to this year's Perseids meteor shower? Right: From Why would the Perseids meteor rate fall off after maximum faster than the increase before maximum? - click each for full size 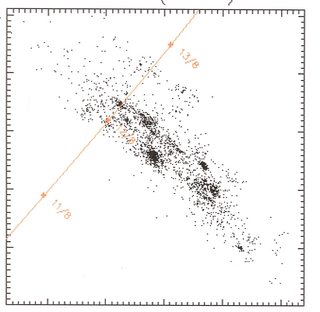 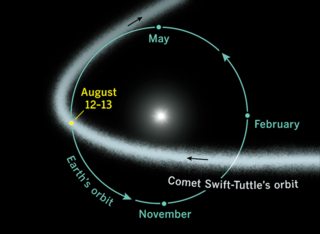 The cometary particles need not retain the exact same orbit as the comet in order to stay close together near perihelion, thus where their orbit passes Earth's orbit.

Slight changes in the orbital parameters of the released dust particles can include slighly higher or lower aphelion, and thus change the revolution time and the time of perihelion (Earth) passage enough to spread out the particles. Over many revolutions it will eventually spread out over the whole orbit.

Additionally the orbits by the dust particles are subject to changes due to interaction with the solar wind and solar radiation which will over time change their orbits (yorp effect, Yarkovsky effect, radiation pressure etc).

This behaviour also explains that the meteor showers will be stronger in some years when Earth passes through a part where particles have not yet had time to more equally disperse.

Addendum: The other question on tails How can comets have tails if there's no air resistance in space? is related. Yet the (visible) tails are caused by either (ionized) gas or (small) dust particles (nm ... µm) which scatter the light. While these dust particles certainly also can make meteors, the larger the particles are, the less efficiently radiation pressure works on them, so their orbital evolution is much slower. And comets do release also a lot of bigger particles from µm up to cm (excact size distriubtion subject to disussion and analysis especially as follow-up to Rosetta mission, also depending on comet size and age) which are not easily visible in the visible light when observing it from Earth.

It's orbital mechanics. If a comet ejects a rock with a very small velocity, the rock winds up in an orbit very similar to the comet. However, that orbit may have a slightly different period. So, over many orbits, the rock drifts along the orbit with little sideways displacement. Changes in the other orbital elements don't cause a displacement that accumulates with time like the displacement caused by a change in orbital period.

Oddly, if the comet ejects the rock forward, the rock's orbital period increases, so it soon falls behind the comet, and continues to do so on the average as time goes on.

Not the answer you're looking for? Browse other questions tagged solar-system orbital-mechanics comets meteor-shower or ask your own question.

38
How can comets have tails if there's no air resistance in space?
13
Why would the Perseids meteor rate fall off after maximum faster than the increase before maximum?
4
What (actually) is Jupiter doing to this year's Perseids meteor shower?
5
Why do we only have one major meteor shower from 3200 Phaethon?
3
Meteor shower predicted to be best viewed BEFORE midnight (for reasons other than the moon)?
3
Why are these objects moving at Vastly Different Speeds along the same orbit?
4
How to calculate the position of a meteor shower's radiant point based on its associated comet's orbit?
2
Have meteor showers been predicted for planets or solar-system bodies other than Earth? Have attempts been made to detect them?
1
What makes some meteor showers continue for days, while the "Unicorn shower" can be shorter than one hour?

3
Leonid meteor showers and the Tempel-Tuttle comet
3
Why are these objects moving at Vastly Different Speeds along the same orbit?
13
Why would the Perseids meteor rate fall off after maximum faster than the increase before maximum?
8
How uniformly is cometary debris distributed along the entire orbit of the comet?
1
What makes some meteor showers continue for days, while the "Unicorn shower" can be shorter than one hour?
2
Why are Delta Aquariids "for the southern hemisphere" while the Perseids are "for the north"?
1
Why doesn't the Moon fall out of orbit?