So when I look at images taken of Andromeda, I see a lot of individual stars. 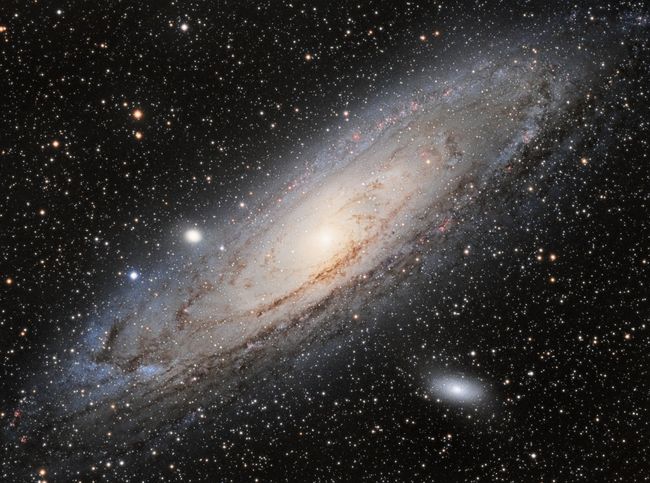 It seems to me that the actual individual stars that far away would be too small to resolve, even with a big scope like the Hubble. So, I have to assume that these points of light that I see are either a) stars in our own galaxy, or b) other distant galaxies, like we would see in the Hubble Deep Field: 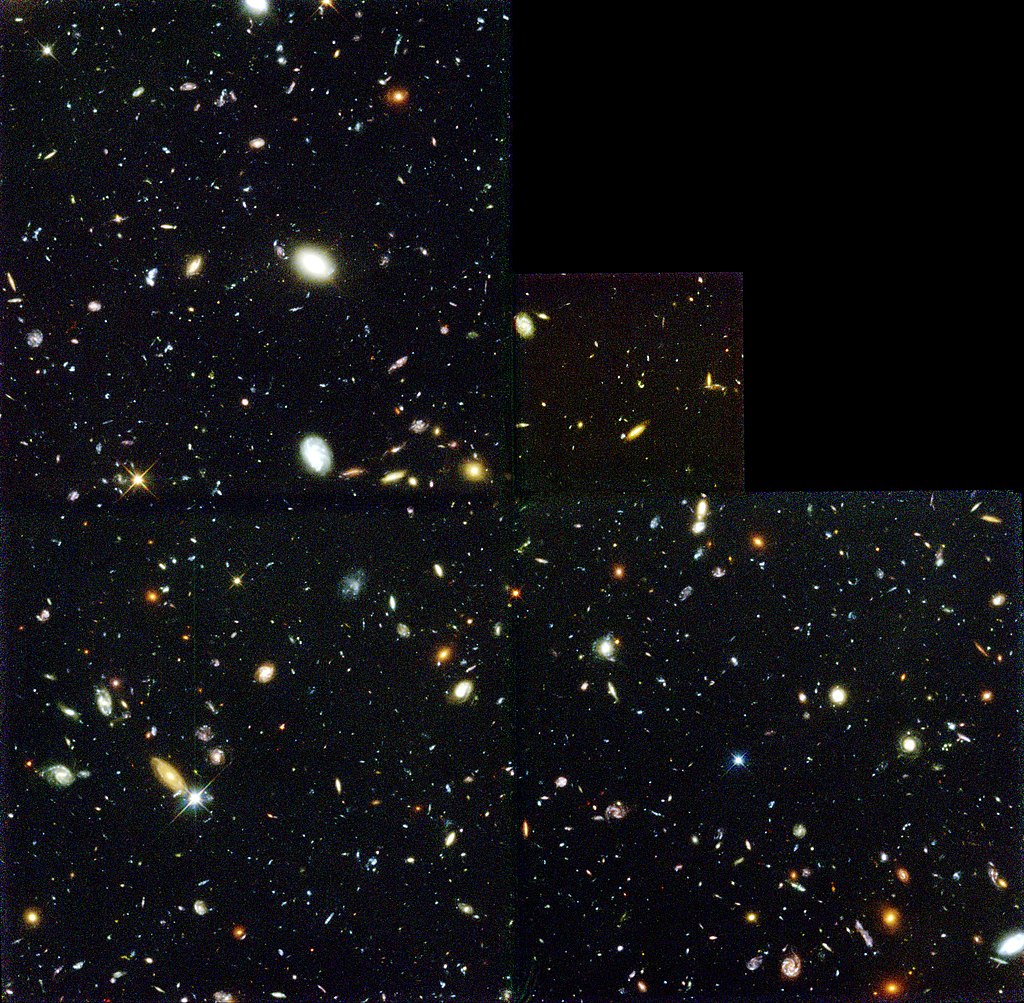 I have to imagine that the glow from the galaxy comes from the scattering and reflecting of all the collective starlight inside the galaxy off the dust and gas and whatnot contained therein, and that the actual individual stars would be kind of like individual droplets of water in a cloud. Almost kind of like when you can briefly see the form of a cloud when lightning flashes inside it at night (even though the light really isn't coming from the droplets)

Am I even close to correct in thinking this?

There is some confusion here about the word "resolve". In astronomy, to resolve an object means either to establish details of its structure and physical extent, rather than seeing it as a point source; or it means to separate a single entity into its component parts.

The former depends on the size of the object in question and how far away it is. The Hubble Space Telescope (HST) cannot resolve stars in this sense, not even the closest stars$^1$. All stars are imaged by HST as points of light, that are blurred to some extent because of the finite size of the telescope mirror and imperfections in the optics.

From that point of view, it does not matter how far away a star is, its image will look the same, other than of course the further a star is away, the weaker the total signal received will be.

I think your question refers to the second definition of resolution. Here the problem is to identify individual stars against a bright background. This can be done in Andromeda, because although stars are seen against a backdrop of billions of unresolved stars, astrophysics (as well as telescope optics) comes to the rescue.

There are relatively few very massive, evolved "supergiants" in a galaxy. But these objects are many orders of magnitude brighter than the stars around them. To "resolve" these stars, it is simply necessary to obtain images where the brightness of these individual stars is not smeared over too great an area so that they merge into the background light contributed by all the other stars.

This is actually not so difficult for a galaxy as close as Andromeda, and had been done using normal (but still large!) telescopes in the 1920s. The HST makes it much easier (and possible in more distant galaxies) because the light from an individual star is much less blurred by HST's optics and its position above our turbulent atmosphere. This enhances the contrast between individual bright stars and the bright background that they sit in.

$^1$ Actually, some of the closest supergiants like Mira and Betelgeuse can just about be made out as fuzzy blobs in the best HST images.

You are right that most of the dots of light that you see in the at image of Andromeda are stars in our galaxy that happen to be on the same alignment.

However we can resolve stars in the Andromeda galaxy. (Here I am understanding "resolve" means "to see as individuals and not just a haze")

Even without the Hubble telescope, individual stars had been identified in the Andromeda galaxy, and (since the brightness of some of these stars can be determined) the distance was calculated. This was also done by Hubble, but by the man, not the telescope. He found that the Andromeda galaxy was not part of the Milky Way, but much further away.

Hubble's photograph from 1923 can be compared to a modern skysurvey image.

The light in the image that you show is the combined light from billions of stars. They are too dim to be seen at the resolution of your image, but combine to make what looks like a shining cloud. Just like a real cloud is made of lots of dots of water that are too small to see.

There are background galaxies. Some can be seen on the high resolution view I link above. One surprising thing is how small the area of the sky in the Hubble Deep field image is. It would be only a few pixels across on the scale of the image you have of the Andromeda galaxy.

You could expect that many galaxies to be in every few pixels, but too dim to be seen in the image of Andromeda.

Edwin Hubble's observations a few years later settled the issue. Using the 2.5 m reflector at Mt. Wilson to study Cepheid variable stars in M31, M33, and other nearby galaxies, he showed that they were well outside this galaxy.

The Wolf-Rayet star R136a1 is apparent magnitude 12.2, within reach of a skilled amateur with a 20 cm telescope. If it were at the same distance as M31, it would be only 6 magnitudes fainter, at magnitude 18.2. Automated 1 m telescopes routinely discover asteroids at magnitude 20 or fainter.

I have to imagine that the glow from the galaxy comes from the scattering and reflecting of all the collective starlight inside the galaxy off the dust and gas and whatnot contained therein, and that the actual individual stars would be kind of like individual droplets of water in a cloud.

This is not correct. The glow from from the galaxy is overwhelmingly light from individual stars traveling directly to us. This is demonstrated by the fact that galaxies lacking dust and gas, like most elliptical galaxies, have the same kind of "glow". (Examples: the compact blob of white light directly to the left of the center of Andromeda, about 1/4 of the image width away, is M32, a so-called "compact elliptical galaxy" in orbit about Andromeda. The more elongated, slightly more diffuse blob at 4 o'clock, about twice as far away from the center of Andromeda, is M110, a "dwarf elliptical galaxy" also orbiting the Andromeda galaxy. These are at roughly the same distance from us as Andromeda, but have essentially no gas or dust.)

What you are missing is the fact that the telescope optics (plus turbulence in the Earth's atmosphere for ground-based telescopes) blurs each individual star into a fuzzy disk with a finite size (each "disk" being bright in its center and fading away with increasing radius). These disks are large enough in angular size that -- if there are enough stars in a small enough area on the sky -- they overlap with each other, creating the appearance of a smooth glow.

You are correct that individual stars, even massive stars like R136a, are individually rather faint at the distance of the Andromeda galaxy; but there are hundreds of billions of stars in the Andromeda galaxy. Even in a small subsection of the galaxy, you are still seeing billions of stars. The combined, overlapping light traveling from those stars to the telescope is what we see.

Now, there are cases where you can see scattered/reflected light from dust, which has a lovely blue color (because dust scatters blue light more efficiently). But this is really faint, and generally only seen for nearby dust in our own galaxy. (Look for pictures of the Pleiades.) The faint blue regions in the outer parts of the Andromeda galaxy are not from this -- they are regions with lots of bright blue stars, due to there being lots of recent star formation in those parts of the galaxy. (Generally, only short-lived massive stars are hot enough to be visibly blue.)

In many galaxies, you can also see -- if you look at just the right wavelengths -- light emitted by individual gas ions/atoms/molecules in the interstellar medium. In the Andromeda picture you show, you can see faint pinkish blobs, mostly in the upper right of the galaxy; this is H-alpha emission from hydrogen atoms in ionized nebulae within the galaxy. This is somewhat exaggerated in the picture, because the person who took it deliberately combined the broad-band R, G, and B filters with separate exposures through a narrow-band filter centered on the H-alpha wavelength.

Not the answer you're looking for? Browse other questions tagged star galaxy luminosity or ask your own question.

2
Observing cepheid variables in other galaxies

8
Are those noise or stars?
8
What is the scale of things you can see with gravitational lensing?
5
Why aren't new stars in Earth's relative proximity constantly discovered?
42
How do we have photos of galaxies so far away?
5
Can we see the stars at the edge of the Milkyway?
0
What's that limit, where we start to see infrared galaxies?
2
How tightly clustered are the CHIME-detected FRB repeats?
11
Why do we see galaxies with their actual spiral shapes?
1
How do galaxies move in space?
19
Can lightning occur in stars like the Sun?