What is the probability of seeing a neutron star as a pulsar?

Pulsars are neutron stars that emit a beam of electromagnetic radiation that is not aligned with its rotation axis. If the Earth passes through that beam of radiation, we see a pulsar. Pulsars are only observable if the beam crosses the observer's line of sight. Otherwise, we can only see a regular neutron star.

For a pulsar with random orientations, what is the probability of seeing its beam from Earth? Out of 100 pulsars, how many will have a beam that crosses the Earth?

observational-astronomy pulsar
Share
Improve this question
asked May 5, 2020 at 13:47

The probability of seeing pulsed emission from a neutron star is simply the fraction of the sky covered by the beam, i.e. the beam solid angle divided by $4\pi$ steradians. 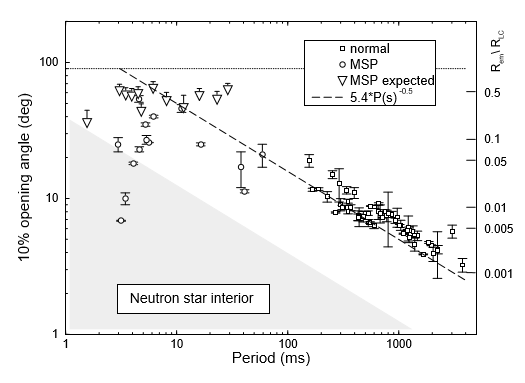 If you wanted to choose a representative opening angle to determine the probability that a particular pulsar will sweep its beam across Earth, it might be best to pick an angle calculated from the pulsar's period. On the other hand, if you care about a population of pulsars with a random period distribution, you would be better off simply looking up a mean value of $\rho$. Picking $\rho=40^{\circ}$, for example, gives $f\approx0.12$, as tuomas quoted in their answer, which is a reasonable value.

Out of 100 pulsars, how many will have a beam that crosses the Earth?

"The beaming fraction f , that is the mean value of the fraction of observable pulsars or the mean probability of observing a normal pulsar, is 0.124 ± 0.004." M. Kolonko et al.: On the pulse-width statistics in radio pulsars

Not the answer you're looking for? Browse other questions tagged observational-astronomy pulsar .

2
Can a pulsar also be a magnetar?

15
What causes a neutron star to become a pulsar?
19
How Would a Neutron Star Actually Appear?
3
Could human life thrive on a planet in a pulsar star system?
21
Can we detect pulsars that aren't "pointed" towards us?
5
How bright is the Crab Pulsar's 30 Hz modulation in visible light? What color is it?
6
Do pulsar beams interact with the interstellar medium?
5
How do we know pulsars have two beams?
5
Is the pulsar map on the Pioneer/Voyager probes only meaningful for earthlings?
3
What exactly is "the rotating lighthouse model" in the context of a double pulsar?
6
Is "magnetars don't last long — just a year to a few years" really true? Is it a misquote or perhaps taken out of context?