Why does the latitude of an observer affect the hour angle of a body in Stellarium?

I am using Stellarium for astronomical data to help in studying celestial navigation. While trying to track down a source of errors in my sextant reading or sight reductions I noticed that the local hour angle (shown HA on Stellarium's ephemera) of Venus varied if I changed the latitude of my location whilst keeping time constant.

Can anyone explain this. I thought the HA would only be a function of time, longitude, and the position of Venus (RA, Dec). Why would my moving north along my meridian affect the HA of a body? Aren't both my meridian and Venus' fixed (time is stopped), so the angle between them wouldn't change?

I know it's only a tiny amount, but I would like to understand what the principle behind it is. Everything I found on Google seemed to suggest it shouldn't change. I wondered if it was something to do with parallax changing as I changed position.

Thanks for any help.

celestial-mechanics navigation
Share
Improve this question
asked May 17 '20 at 15:10

I do not have Stellarium, so I cannot confirm what is causing it with 100% certainty. But by using JPL's Horizons website, I can confirm that the position on the Earth's surface changes the apparent Right Ascension (R.A.) and Declination (DEC) of Venus. The following output is for an observer at 80 degrees W longitude and the latitude listed. The time was chosen so that Venus was approximately 7 hours east of the meridian; that is, the hour angle was approximately 7 hours.

These results show exactly what you were noticing in Stellarium:

Observing from the Earth's surface (topocentric position) is important for the Moon if you are looking for occultations or close conjunctions or precise hour angle, but not as important for other objects which are much farther away. Stellarium probably has a setting to change the calculation from topocentric to geocentric, in which case the hour angle discrepancy will disappear.

Suppose we could look at Earth from Venus at that time: 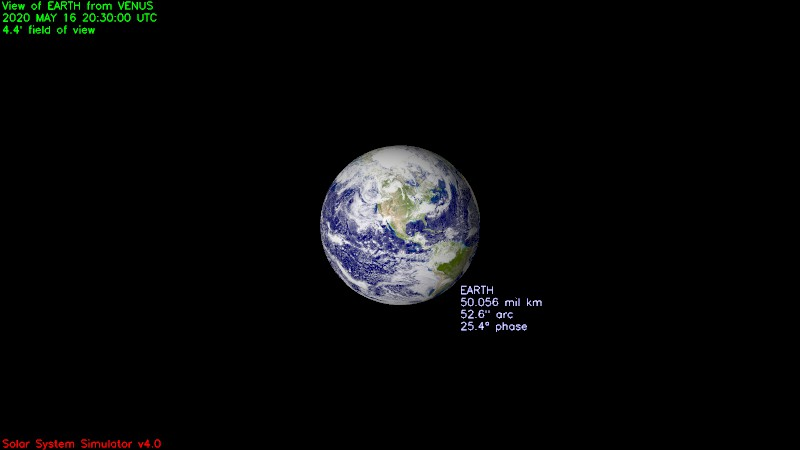 It's not a correction for parallax or refraction. It's a bug. Your understanding that HA is not affected by observer location is correct. (Navigators commonly refer to it as LHA, for local hour angle. The other HA is SHA foe sidereal hour angle.)

Stellarium seems to be mainly for users with an interest in astronomy, users who input their location and what they want to see and get where to look in return. Navigators want to input time and what they saw and get location in return. That's not the reason for the bug, but it's probably why no one has found it significant. It's a great program, but it seems to have some rough spots as an almanac for celestial navigation. I'm guessing that it throws in corrections for parallax and refraction, which redefines GHA. I also noticed that it uses local standard time, rather than GMT.

The anomaly in the question not a parallax correction because there's no location on the meridian of the Venus geographical position (GP) that would have a parallax error affecting the apparent GHA of Venus. (The poles are the meeting points of all the meridians.) There would be a significant shift in the apparent declination, though. At the north pole it would be further south. Something like 0.25 minutes of arc.

And it's not a refraction correction because most of the points you tried can't see Venus: it's below the horizon. The two points that can see Venus (prime meridian, 80 and 90 deg N declination) are both about 63 degrees away from Venus' GP. That means the observed altitude is 1.9 arc minutes higher than actual altitude. (Table in the bookmark page in Increments and Corrections in the Nautical Almanac)

You'd be much better off using the Nautical Almanac, rather than Stellarium, for navigation. It's an official, joint publication of the US Naval Observatory and the UK Hydrographics Office. How to use it is in books I know of as Dutton and Bowditch. Both are updated frequently. There are free versions of the current Nautical Almanac available online and many versions of Bowditch. A lot of them are historic: it was first published around 1800.

Wikipedia also has good explanations. About everything, actually.

Not the answer you're looking for? Browse other questions tagged celestial-mechanics navigation or ask your own question.

4
Why does the precession of the earth affect other planets?
14
How does the gravitation of Jupiter or other big planets affect Kepler's third law?
3
Why does the Sun track out a seemingly sinusoidal path on the celestial sphere?
1
Why does east and west appear to be mirrored in the celestial sphere?
6
How to calculate the altitude of a star given the hour angle, declination, and latitude?
0
Questions about Celestial Navigation