Why is SWAN dimming?

The SWAN C/2020 F8 comet is passing near the Earth, but from Wikipedia

The comet has dimmed a small amount since May 3. 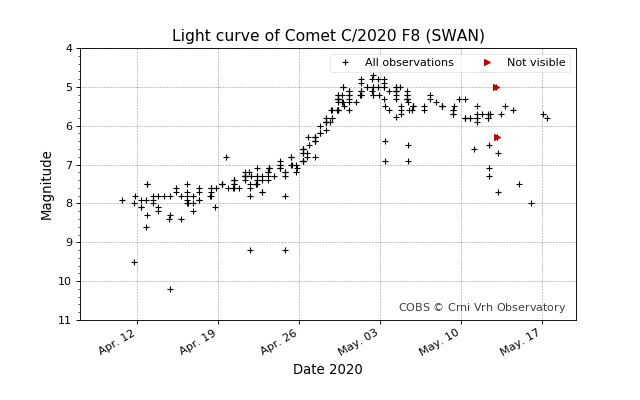 What is the cause of this dimming?

SWAN seems to be on a parabolic orbit. This means that it is the first time that it is interacting with the Sun, making it a "new" comet. New comets are covered in a layer of very volatile elements that will vaporize pretty fast when the comet is still far away from the Sun. This causes a surge in brightness. But once those very volatile elements are gone, it stops getting brighter and the comet's brightness can even decrease.

In addition to this, it is mostly losing gas, so its tail isn't as visible as if it were a tail of dust.

(From this article, in French)

Not the answer you're looking for? Browse other questions tagged observational-astronomy comets magnitude or ask your own question.

13
Why would the Perseids meteor rate fall off after maximum faster than the increase before maximum?
1
Comet 289P/Blanpain sudden outburst?
3
What was the field of view of the Ohio State University Radio Observatory of Wow! signal fame?
1
How is Comet SWAN C/2020 F8 doing? Will it become easily visible by eye?
2
Why are Delta Aquariids “for the southern hemisphere” while the Perseids are “for the north”?
5
Why does the background noise in this image of 2020 QG look like corduroy?
3
Luminosity of Neowise
3
Graph of apparent magnitude of Mars through time from around 2000 to present?
5
Why do we only have one major meteor shower from 3200 Phaethon?