I am wondering what projection is used to produce plots like this: 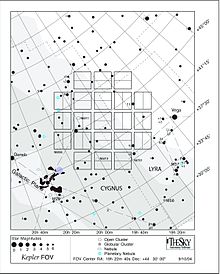 More generally, I am trying to figure out the telescope pointings (in az/el or an earth-centered-earth-fixed coordinate system preferably, RA/dec if the former are not possible or easy) for a tiled array of square images positioned next to each other, similar to how the Kepler CCDs are laid out. I'm thinking that if I could know what projection is used to produce that plot, then I could step in x/y to wherever I want the images to be and then de-project to convert to RA/dec.

I have tried a gnomonic projection but I found that, with increasing distance from the survey center-point, more and more overlap occur between adjacent frames. Things looked really good close to the center-point though. I realized that a gnomonic projection isn't actually providing what I want, since I can move across the projection area a large amount (infinity in the limiting case) and still end up with az/el pointings that are on the horizon, despite moving over an infinite number of frames.

Most CCD or photographic images are equivalent to a gnomonic projection. I suppose this is true of the Kepler CCDs; while the Schmidt camera focus surface is curved, the CCDs have individual field flatteners. If the projection is not exactly gnomonic, the difference is not very great in a small field.

As you found, a single gnomonic projection doesn't work so well for areas much wider than 90°. TheSky user guide says it uses orthographic projection for fields smaller than 60°. The slightly curved RA lines and slightly oblique intersections near the corners of the chart in question are consistent with that. Other projection choices are also valid, e.g. stereographic projection is common in maps showing a hemisphere at once.

In any case you'd need to transform the individual image tiles to the same projection as the composite overview. This will change the tiles' shapes or sizes, but the relation between map coordinates and sky coordinates will be consistent.

Not the answer you're looking for? Browse other questions tagged telescope sky-survey projection or ask your own question.

48
How powerful a telescope would allow me to view the astronauts aboard ISS do a space-walk?
5
How do telescopes “zoom” and change angle of view?
7
Is it safe to view moon at daytime through telescope
6
Can an astronomical telescope view objects on Earth?
5
How to choose portable, yet powerful telescope
3
How does making a refracting telescope very long reduce the chromatic aberration of an uncorrected lens?
4
How do focal length, angular magnification and field of view relate?
3
How can I improve the Field of View of my home-made telescope?