What would Jupiter look like from a Galilean moon?

If I were on a Galilean moon of Jupiter, like Europa or Ganymede, what would the planet look like? (Let's say I'm on a space station that provides atmosphere to make it slightly less unrealistic.)

Would it look like our moon, only a bit bigger and colored like Jupiter, with the stripes and the "eye", or would the moons be close enough for Jupiter to look gigantic and fill a significant portion of the sky?

The two moons that are closest to each other are Io and Europa. They seem to be about 250,000 kilometers away from each other. Would it be possible to see one from the other with the naked eye if they were aligned? For example, if Europa were in a position in its axis where it is lit by the sun, could I see it, looking at it from Io? Or would I need a telescope? A 3000 km sphere from 250,000 km away does not seem possible. The other way around, of course, Io is a bit bigger.

But the part I'm the most interested in is: what would Jupiter look like from one of these moons.

You can simply startup Stellarium and have a look yourself. Choose any locations you are interested in. The Galilean satellites of Jupiter are inside the default list of locations.

The attached image shows Jupiter as viewed from Io at the given time, Europa is the bright object to the right; with -9 mag it is considerably brighter than Venus when viewed from Earth, but slightly less so than Earth's Moon as seen by us.

Interesting to note is also the huge extend of Jupiter in the field of view, if you choose the right hemisphere (Io is in a tidally-locked state). With roughly 15° you need about your entire hand at arm's length to block it while the sun is a lot smaller (~30x larger than Sun or Moon when viewed from Earth). Also the daily eclipses of the Sun by Jupiter might be noteworthy. 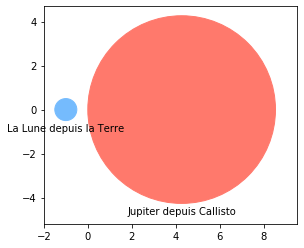 Science fiction writers and scientists have imagined the possibility of exomoons orbiting giant exoplanets in other star systems being habitable.

And htere have been scientific articles discussing the possible limits of exomoon habitabilty.

In my answer to this question:

The last part of my answer links to this scientific article discussing exomoon habitabilty:

The author of that article calculates the inner and outer limits, in terms of radii of their planets, for the orbits of habitable exomoons.

And from that range of orbital distances I roughly calculated that a habitable exomoon would orbit at distances such that the giant exoplanet that it orbits would appear to be between 5.7295 to 22.9183 degrees wide, about 11 to 45 times the angular diameter of the Moon.

I may also point out that among those moonsof a giant plaent which are large and massive enough to be gravitationally rounded, the smallest moon with a rounded form would appear on the borderline between a dot of light and a disc with a visible diameter when it was about 5,729,582.7 kilometers, or 3,560,197.6 miles from another moon. So whenever a smallest possible rounded moon was closer than about 5,729,582.7 kilometers, or 3,560,197.6 miles, it would definately appear as a disc. And if a moon was larger than the smallest possible rounded moon, it would appear as disc in the sky of another moon even if the distance between them was more than about 5,729,582.7 kilometers, or 3,560,197.6 miles.

The two moons that are closest to each other are Io and Europa. They seem to be about 250,000 kilometers away from each other. Would it be possible to see one from the other with the naked eye if they were aligned?

because Io and Europa orbit Jupiter in different orbits, the distance between them is not constant. Instead it is always changing.

So the distance between Io and Europa varies from about 249,000 to 1,092,734 kilometers. When they are farthest apart they are on opposite sides of Jupiter and hidden by it as well.

Europa, with a diameter of 3,121.6 kilometers, is the smallest of the Galilean moons. At its farthest from Callisto it is about 2,553,743 kilometers from Callisto, and according to my rough calculations should appear to be about 4.2 arc minutes wide from Callisto, about an eighth of the diameter of the Moon as seen from Earth. Of course Europa would be on the far side of Jupiter and hidden from Callisto anyway.

Io has a diameter of about 3,650 kilometers, and can be as close as about 249,000 kilometers to Europa. According to my rough calculations Io can appear as wide as 50 minutes wide in the sky of Europa, about one and two thirds the apparent width of the Moon as seen from Earth. Ganymede should appear approximately that wide from Europa when they are closest.

17
How was Io not torn apart by tidal forces during its formation?
15
Determine the moons of Jupiter through a telescope
4
Which of Jupiter's moons did I most likely see?
1
What is the fifth moon-like object I saw around jupiter through my telescope?
5
Does Ganymede have a day/night cycle? If so, what does it look like?
1
If we stood on the surface of a Jovian moon, Saturn would appear as a dot. Why doesn't Saturn appear like this in a telescope?
6
If Jupiter and Saturn were considered stars, which of their moons would qualify as planets by 'clearing the neighbourhood'?
6
When will Callisto be in orbital resonance with the rest of Jupiter's big moons?
2
What would be 1 hour equivalent on these moons of Jupiter and Saturn compared to earth? And their astrobiological implications