Why were two galaxies named “The Sagittarius Galaxy”? Is this common?

The formation of the Sun, the Solar System and the subsequent emergence of life on Earth may be a consequence of a collision between our galaxy, the Milky Way, and a smaller galaxy called Sagittarius, discovered in the 1990s to be orbiting our galactic home.

and I checked Wikipedia which says: 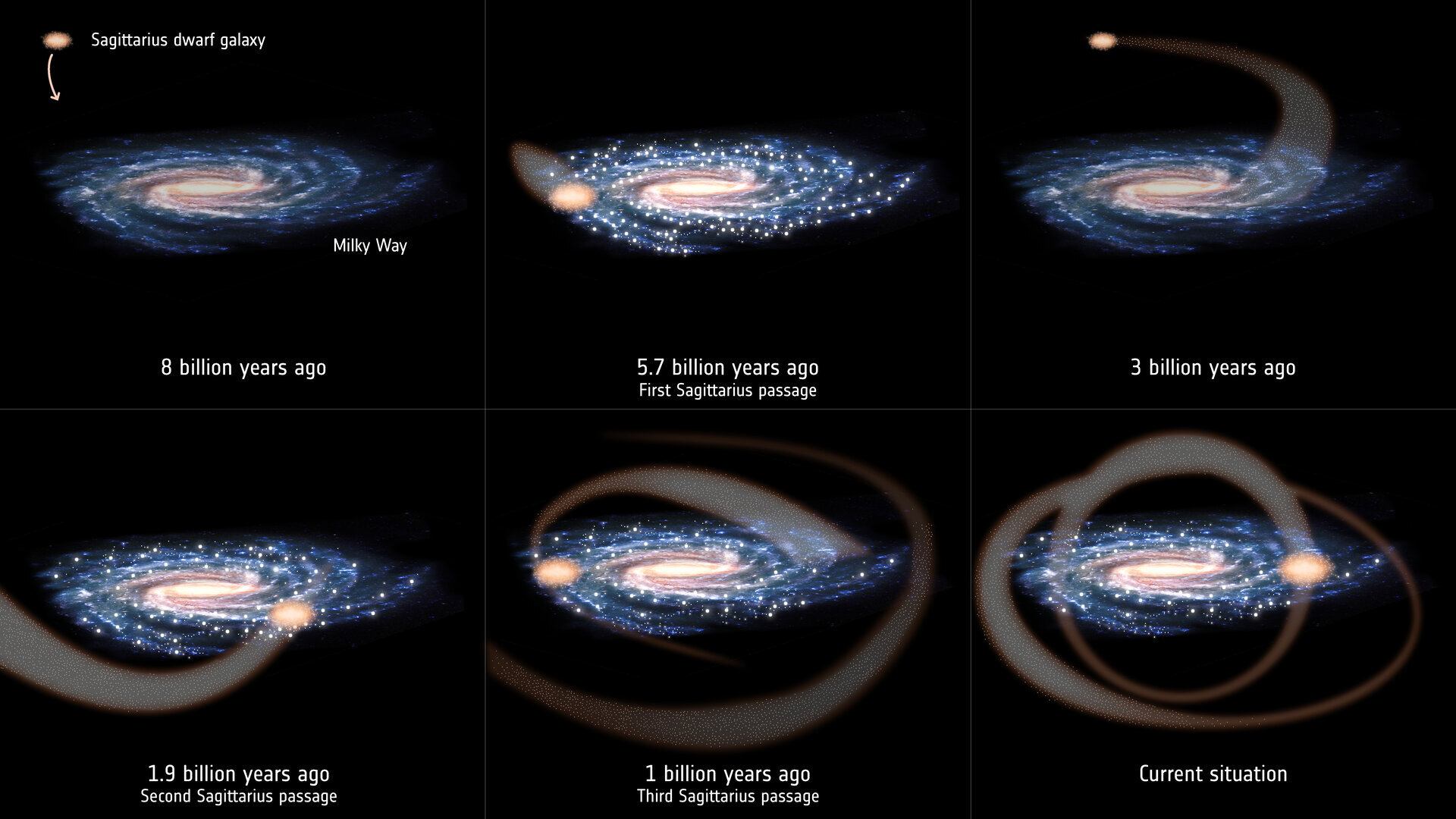 The Sagittarius dwarf galaxy has been orbiting the Milky Way for billions for years. As its orbit around the 10 000 more massive Milky Way gradually tightened, it started colliding with our galaxy's disc. The three known collisions between Sagittarius and the Milky Way have, according to a new study, triggered major star formation episodes, one of which may have given rise to the Solar System. Credit: European Space Agency 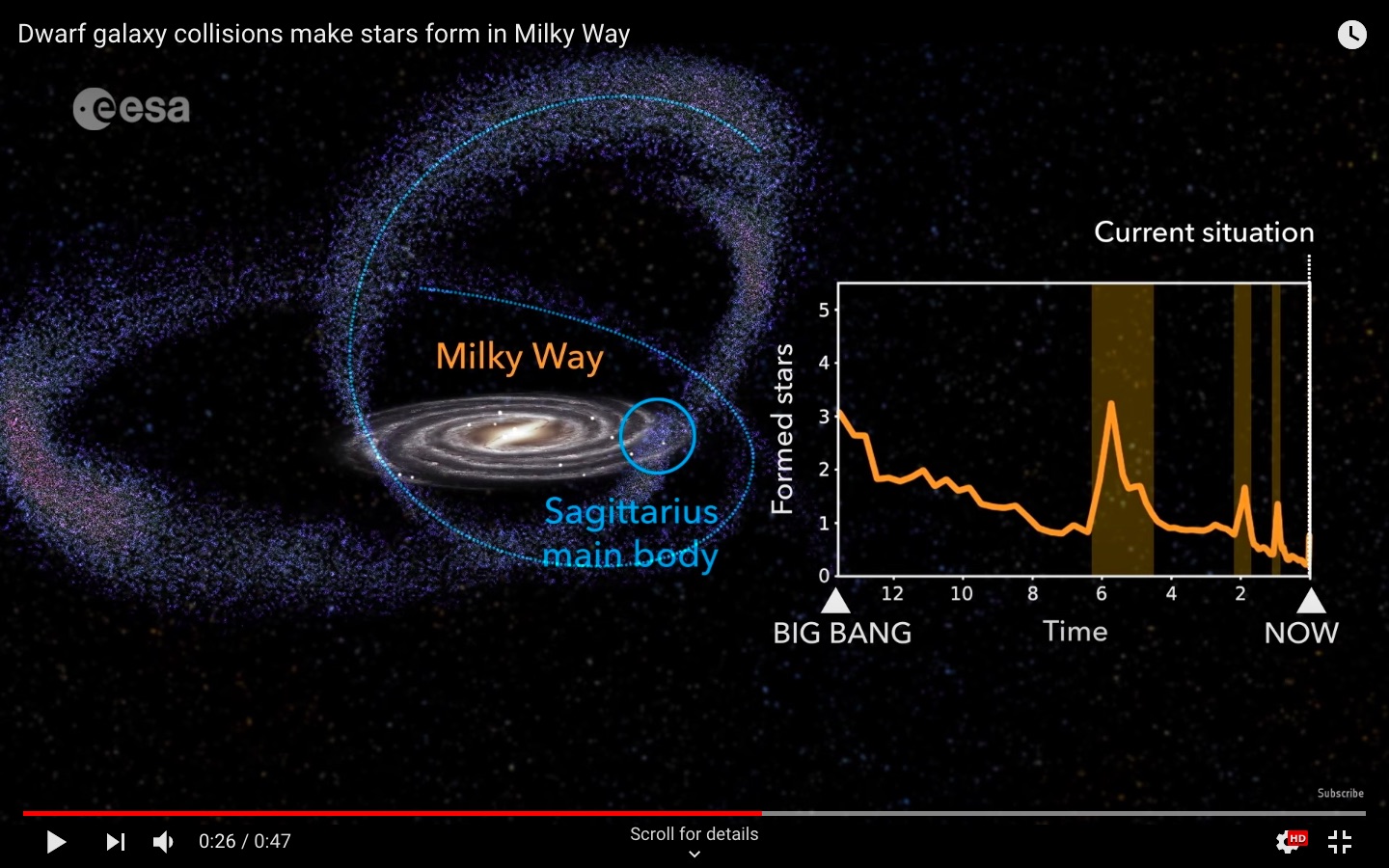 A constellation is more of a direction than a place, a sort of a three dimensional wedge of space extending from Earth to infinity. So saying that astronomical objects are "in" constellations can be a little bit misleading.

Basically the sky looks sort of like a hemispherical dome at any one time. And since Earth is a ball floating in space it looks like it is surrounded by a spherical shell.

It is impossible to see how far away astronomical bodies are - their distances have to be measured using precise instruments - so all the visible stars look like they are the same distance away. So for thousands of years scientists more or less assumed that the stars were lights on the surface of a spherical shell far beyond Earth.

And for thousands of years people have been noticing apparent patterns in the stars that appeared to be at the same distance. And so they gave names to those patterns and called them constellations. And as the Sun and Moon and planets moved around in space, each planet believed to be attached to an invisible crystal sphere, they appeared to move in front of various constellations, and thus they were said to be "in" those constellations, even though they were believed to be much closer to Earth than the shell of stars was.

And a few centuries ago the scientific revolution more or less destroyed belief in invisible crystal shells with planets attached, and thus in the sphere of stars, and astronomers became open to the idea that stars might be at various distances from Earth. After a century or two of attempts to measure the distances to stars, the distances to three stars were measured in the 1830s, 61 Cygni at over 10 light years, Alpha Centauri at over four light years, and Vega about 25 light years. Obviously they could not be attached to a spherical shell centered on the Sun.

In the 20th century, astronomers established official borders for the constellations. The simplest possible shape for a constellation is a rectangle drawn on the celestial sphere. Since the celestial sphere doesn't physically exist and space extends to infinity, the actual shape of a simplest possible constellation would be a sort of a pyramid, with a rectangular cross section and a steep slope, extending from the solar system to infinity.

And many constellations have more complex shapes, being composed of several attached two dimensional rectangles and thus being complex three dimensional pyramids extending from Earth to infinity.

And since constellations extend from Earth to infinity, saying that an astronomical body is "in" a constellation, or giving its coordinates on the celestial sphere, can show where to point a telescope at it, but doesn't say how far it is from Earth.

For example, the Moon passes through the Zodiac constellations as it orbits the Earth. The average distance of the Moon from earth is 384,399 kilometers. During solar eclipses, the Moon passes in front of the Sun, and thus appears to be very close to the Sun. But the average distance from the Earth to the Sun is 149,597,870.7 kilometers, or one Astronomical unit, or one AU. That is about 389.17 times as far as the Moon.

Stars in the Constellation Andromeda, that appear to be close together as seen from Earth, include:

So saying that astronomical bodies are "in" constellations can be deceptive. It may narrow down the directions to those astronomical bodies, but it doesn't specify the very important distances to those bodies. It is perfectly possible for two bodies "in" a constellation to be so far apart that one of them is hundreds or thousands of times closer to a body on the opposite side of the sky than to the other body "in" that constellation.

Constellations should be thought of as directions instead of places.

Not the answer you're looking for? Browse other questions tagged galaxy naming or ask your own question.

4
What is the difference between a dwarf spheroidal galaxy and a globular cluster?
17
Where does the Milky Way end?
10
What (actually) is the “ deprojected half-light radius” of this almost-all-dark-matter Galaxy?
12
What will happen to the shape of a galaxy when a super massive black hole lying in its center dies(evaporates out)?
2
How do disk-shaped galaxies then form at the sites of spherical galactic halos? Do the halo stars start orbiting or just sit in place?
0
Why is SPT0418-47 (“the most distant Milky Way look-alike”) expected to evolve into an elliptical galaxy?
5
Why were the Magellanic Clouds named that way?