What equipment and techniques were used to study Betelgeuse's diameter in 1920?

In 1920, when the first interferometric studies were performed on the star's diameter, the assumed parallax was 0.0180″.

How exactly were the first interferometric studies performed on Betelgeuse's diameter? What actual equipment and technique was used to do this in 1920?

Addressing item #4 further, the paragraph goes on to say

This equated to a distance of 56 pc or roughly 180 ly, producing not only an inaccurate radius for the star but every other stellar characteristic. Since then, there has been ongoing work to measure the distance of Betelgeuse, with proposed distances as high as 400 pc or about 1,300 ly.

Had they used the correct parallax and distance, would they have arrived at a diameter that would have been roughly correct?

These measurements were made by Michelson & Pease (1921) using the 100-inch Cassegrain telescope at the Mount Wilson Observatory. Modern-day interferometry typically uses multiple telescopes (e.g. IOTA and the Keck Observatory interferometer), as this is typically needed to achieve long baselines (with long baselines admittedly being less important for short-wavelength observing than for, say, radio waves). However, the interferometer the two astronomers used was slightly cruder: a set of four mirrors mounted above the 100-inch mirror. These mirrors were movable, reaching separations of up to 20 feet. Light would reach the outer two mirrors (spaced 20 feet apart) and then be reflected to the inner two mirrors, which would then send the two beams to the main mirror, turning the telescope into an interferometer.

This was indeed the first time the diameter of a star (excluding the Sun) was measured; Michelson had built the instrument three decades earlier, but tested it by observing the Galilean moons. Betelgeuse is an obvious choice, as its large envelope and proximity to the Solar System mean it has one of the largest stellar angular diameters at any wavelength as seen from Earth.

I believe the interferometer is still in existence, in the observatory's museum. Here, however, is the diagram presented by Michelson and Pease in their 1921 paper: 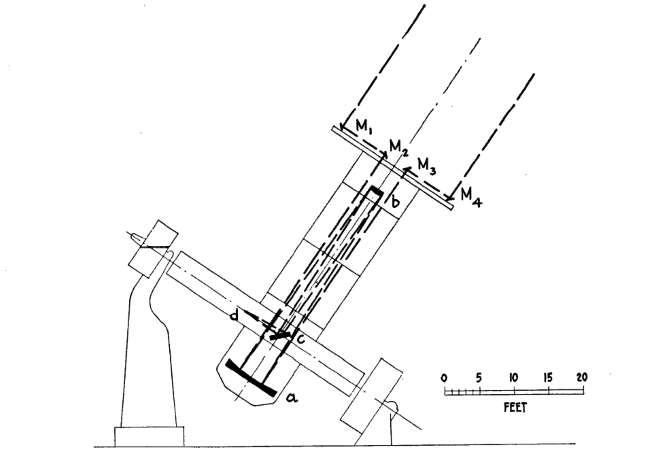 With regards to the star's physical diameter: The pair measured an angular diameter of 47 milliarcseconds, which is certainly in line with the accepted values today. There is variation in Betelgeuse's angular diameter, of course, due in part to the star's variability, but 47 milliarcseconds falls right in the middle of the range expected at optical wavelengths. Had they had the correct parallax, they would likely have arrived at a very reasonable radius.

Not the answer you're looking for? Browse other questions tagged star observational-astronomy betelgeuse or ask your own question.

2
Why does this large Newtonian telescope's front cover have two or three holes in it?
3
What is the maximum distance measurable with parallax?

5
What study profiles could land me the job of astronomer?
11
How was Earth's “quasi-satellite” 2016 HO3 “first spotted” and it's orbit determined?
0
When were the horizontal and equatorial celestial coordinate systems invented?
3
Which techniques are used to convert radio signals received by antenna to images?
4
How feasible is it that we could see the Central Black Hole Sgr A* occlude one of it's closely orbiting stars?
4
Distance to Proxima Centauri (Gaia VS New Horizons parallax program)
10
What will it finally take to accurately measure the distance to Betelgeuse?
3
Do stars have “radio photospheres”? Are they different from their optical photospheres?