Get orbital period of exoplanet from light curve using astropy.timeseries

I am using astropy and I would like to calculate orbital period of an exoplanet by its star's light curve. I follow tutorial in astropy docs and I use data from Kepler in Nasa Exoplanet Archive.

Why period for second planet is wrong? I'm doing something wrong? How can I get the correct result?

The second light curve you show has no obvious periodic behaviour and I cannot see any sign of a planetary transit. The period-finding algorithm appears to be working correctly.

The planet (if it exists) is supposed to be one of the smallest planetary candidates found by Kepler and will have a barely detectable transit (depth of order 0.004%). The small light curve variations you see are either from the star or remaining instrumental artefacts. If you wish to verify or otherwise the results published by Morton et al. (2016), who show no light curves, you will have to do considerably more work to "detrend" the other variability in the light curve.

I think you may be seeing the planet in the periodogram! But also another signal - higher harmonics of other periodic signals

example - various periodic signals in our sun - with a characteristic period of 11 years (in the bottom panel you also see Earth's, as this is a local measure, and thus is mostly affected by our distance from the sun)

*the smallest amplitude signal we could pick out from the lightcurve 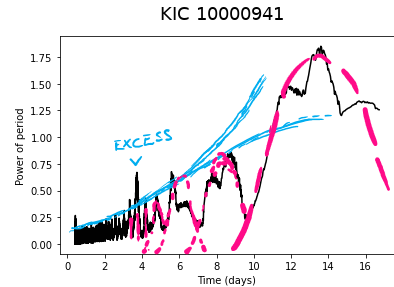 a sketch of the effect - each hill is a harmonic (roughly $sinc^2$) peak - spaced like mountains receding into the distance. note that in a periodogram error in the power grows with the period for a finite length dataset - there's a smaller number of those periods observed - and hence it's the closest peaks which are most difficult to resolve.

These are exactly the kind of peaks you pick up on in the planet for which the process works - you have the peak at 2.2 days, but also 1.1 (=2.2/2), ~0.7 (=2.2/3) and below, each with less power - but also other periodic signals doing the same giving the other peaks. They may or may not be planets (for example they can be clumps of starspots) but they are real signals going on in the star (or some other object in the frame). 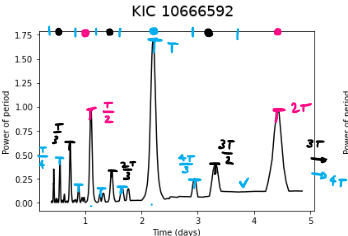 Below you can see an example of the effect of changing the observational error (rows) and the number of data points (columns) in mock data. 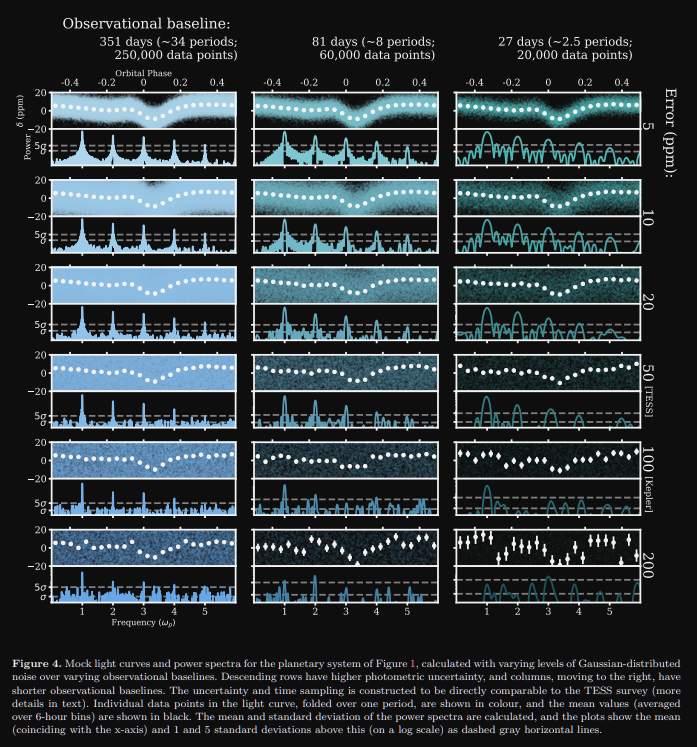 figure from this paper

So to summarise - you're not doing anything wrong, the planet's just small and there's a lot of noise. If you really want to drill down to the planetary signal you'd need to remove that noise - not an easy task but an interesting and seemingly possible one.

Not the answer you're looking for? Browse other questions tagged exoplanet python planetary-transits astropy light-curve or ask your own question.

2
Exoplanet rotation period
3
What's the influence of a tilted orbital plane, when observing an exoplanet transit?
2
Making sense of the lomb-scargle periodogram
3
Pair together light curve and radial velocity data of specified star
0
Calculate mass of exoplanet from transit method
18
Exoplanet dip in transit light curve when the planet passes behind the star
3
Lightkurve nan values after bin light curve