What does “additive fringing from the (multiplicative) twilights” mean?

The question How can I make the fringing pattern visible in my flat (twilight) images for filter i? includes:

I have a bunch of twilight flats that have been preprocessed (dark, bias, overscan etc.) and need to remove the additive fringing from the (multiplicative) twilights. I normalized each one by dividing by the mean and then combined them using ccdproc in astropy. I then divided the normalized flats by this "new" flat and viewed them in DS9 but I still cannot see the fringing.

and the OP went on to post an answer where fringes are visible.

But I haven't any idea what causes "additive fringing" (which I assume means it's a fringing pattern that is additive to an otherwise corrected image) nor what "multiplicative twilights" means.

Could someone explain the basics behind both?

The fringing pattern is caused by thin-film interference within the CCD. The signal received in a pixel will be proportional to the light falling on it, multiplied by a sensitivity, but then some extra signal is added or subtracted which depends on how much of the incoming light is at particular wavelengths that are affected by the interference (i.e. the whole broadband signal does not contribute, only the flux at certain wavelengths).

The fringing pattern is therefore an additive modulation of the sky background, which in general, for broadband filters (e.g. the i filter is 100 nm wide), has both a broadband component (scattered sunlight, moonlight) and a component at discrete wavelengths (airglow lines). Only the latter make a significant contribution to the fringing.

The fringing does not affect stellar photometry measurements, other than by introducing structure in the background that can be difficult to deal with when performing background subtraction. However, it does affect the images cosmetically and disrupts photometric measurements of extended objects.

It is not possible to remove perfectly because the amplitude (and also the shape) of the fringing pattern depend exactly on the spectral make-up of light illuminating the pixels and this will vary depending on (e.g. time of night, whether the Moon is up).

A first-order correction is to make a "fringe frame" by median stacking all the moonless night time exposures, after scaling them by the median sky signal (or the exposure time). A scaled version of this can then be subtracted from every processed image frame to remove the background component that is affected by fringing. It is hence referred to as an additive correction.

Twilight flat fields are used for an entirely different purpose. At twilight the sky background is close-to-uniform and has a broadband continuum spectrum that is dominated by scattered sunlight. It is therefore very difficult to see any fringing in it with broadband filters.

That is good, because the purpose of the twilight flats is to calibrate out the broad band sensitivity of each pixel by dividing by the flat field (hence referred to as a multiplicative correction, and you would normally multiply by a "balance frame" constructed by dividing a smoothed version of the median twilight flat by the unsmoothed version). The twilight flats can also be used to calibrate any large spatial scale sensitivity variations caused for example by vignetting. Twilight flats that do show evidence of strong fringing in broadband filters should not be used to remove pixel to pixel sensitivity variations. In those cases one usually resorts to "dome flats".

The visual appearance of fringing is caused by the CCD (thickness) being comparable to the size of the wavelength (thin-film interference). An everyday example (same physics except with more colors) is an oilslick one sees in a puddle. The wavelengths of visible light are similar in size to the layer of oil on top of the water. The slight variation in thickness of the oil causes the colors to change. Since we are likely familiar with this example, we can see how the filter thickness can produce the same effect (as seen below on the far right). Since fringing adds a pattern, it needs to be subtracted, hence the term "additive".

The flats/twilights are calibration images used to remove artifacts from the science images/data. For example, the CCD has pixel-to-pixel sensitivity, dust spots form, bad columns need to be corrected etc. Flats are used by other professionals but are crucial for astronomers. There are several ways to take flats. The flats I'm using are taken of the twilight sky. The idea is to have an (almost) featureless background in order to see these variations on the CCD. Dome flats are also used. Regardless of how the flats are created, the science images are divided by the flats, hence they are multiplicative.

Other calibrations steps involve removing the bias or pedestal value (a voltage applied) and dark correction, which you can read about if you're interested. Both of these are also additive. Getting your data ready to do science takes a lot of work! Basically, the flat (multiplicative) correction is the last step (for most and for me) in getting your data ready to do science on! 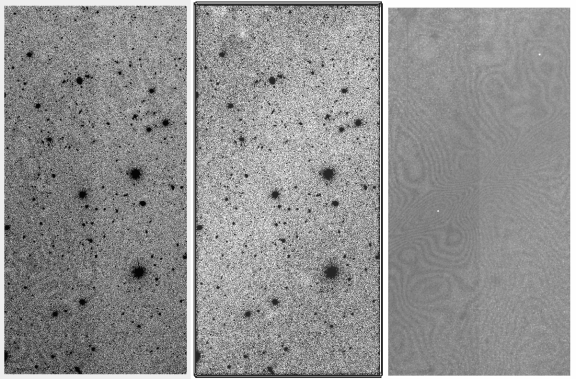 I'll try my best to answer your follow-up question. The terms additive and multiplicative in this context refer to the types of corrections applied to the individual pixel values. Additive errors add to the values of pixels, multiplicative errors multiply the value in a pixel. The fringing imparts an amplitude which needs to be subtracted from the pixel values. In contrast, the CCD's pixel-to-pixel sensitivity is multiplicative. For instance, when I divide one flat by another, this fringe pattern is still there but the CCD's pixel-to-pixel sensitivity pattern is removed. In short, the fringing adds an overall amplitude to the pixels, but it doesn't have the ability to multiply the pixel values like the pixel sensitivity in the chip can. I hope this helps somewhat.

Not the answer you're looking for? Browse other questions tagged photography terminology python astropy image-processing or ask your own question.

2
How can I make the fringing pattern visible in my flat (twilight) images for filter i?

1
What does the BinTableHDU store?
1
What does the filter name I+z' mean
3
Why does the moon 'peel' away from the horizon in this photograph?
4
Get orbital period of exoplanet from light curve using astropy.timeseries
2
How can I make the fringing pattern visible in my flat (twilight) images for filter i?
9
What do the words “p-type” and “s-type” mean?
5
Why does the background noise in this image of 2020 QG look like corduroy?