What is the definition of the “solar mixing ratio”?

What is the definition of the "solar mixing ratio"?

Specifically, I'd like to know why the ratio of H2 and He is 0.84 and 0.16 at the "solar mixing ratio" as shown in Table I in The Galileo Mission. 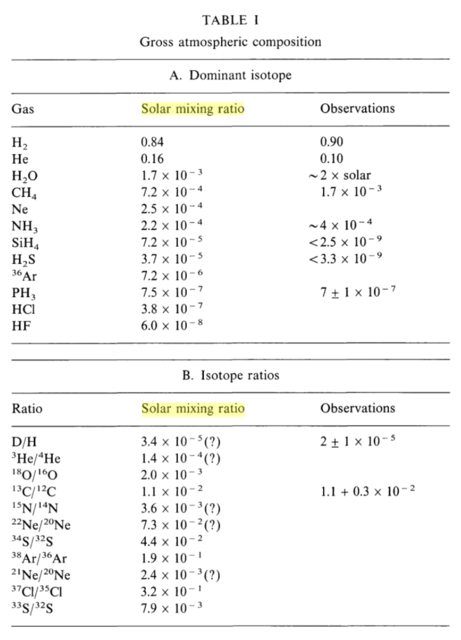 An answer which explains it possibly, but remains speculation as I don't find the term explained:

Taking the pristine abundance of atoms, from which the sun formed (thus solar mixing) gives you a ratio of H and He atoms of 92% hydrogen to 8% helium. Converting that to the place and phase where we have molecular hydrogen (H2), gives a molecular mixing ratio of 83% hydrogen (H2) and 13% helium (He) - which is pretty close to the values given there. They probably use another source with slightly different numbers for the pristine elemental abundances than this wikipedia article.

Thus I consider it likely that they compare molecular abundances. They compare the abundances or ratios you would see, if you took the pre-solar nebular without any chemical segregation and formed the giant planets with the one measured by their spectrometers when actually looking at the atmospheres of the planets.

Reading a page or so beyond the Table you refer to suggests that the "solar mixing ratio" is what you would expect the mixing ratio to be if the gas that made up the planet had the pristine initial solar elemental abundance ratios (i.e. the elemental abundances in the protosolar nebula; it can't be the chemical make-up of the Sun, since the Sun does not contain appreciable amounts of any molecules). The isotopic solar mixing ratios also must be the isotopic number ratios inferred for the protosolar nebula, rather than the present-day Sun, since there is basically no Deuterium left in the Sun (it is entirely burned during pre main sequence evolution).

The reasons they are not are complex and associated with chemical fractionation in the protoplanetary disk, the formation process of the planet, diffusion processes after the planet has formed and probably many other effects of which I am only vaguely aware.

Not the answer you're looking for? Browse other questions tagged solar-system or ask your own question.

55
How many planets are there in this solar system?
6
The defintion of star/planetary/solar system
2
Full Moon Position of Sun
7
Official Definition of Satellite?
1
Why did Mercury not appear to transit through the middle of the sun?
5
What is the word for space that is in the solar system, but outside the heliopause?
5
Are the planets Trappist-1 in the solar system?
3
When would Oumuamua have entered the solar system?
2
How is the term “solar system” defined? Could confirmation of a new planet lead to a change in this definition?