Is Venus in some way tidally locked to... Earth?

The video here demonstrates how Earth sees the same face of Venus every inferior conjunction (i.e., two planets are the closest to each other):

This might be caused by some kind of tidal locking, or it might be a coincidence. Does this type of gravitational resonance exist, either in theory or in the wild (e.g., between moons of Jupiter or Saturn)?

The observed spin-orbit resonance of Venus, whereby the same side of Venus faces the Earth at each inferior conjunction, cannot be explained adequately by gravitational interaction with the Earth alone. The expected solar tidal drag on the solid body of Venus would easily overwhelm the Earth's couple upon any reasonable permanent deformation of Venus. If there exists, however, a solar atmospheric tide, partly thermally induced and similar to that known on the Earth, its torque may counteract that due to the solar solid body tide at a particular rotation period. The small interaction with the Earth is then sufficient to lock the period to one of the resonances in the vicinity of that angular velocity.

The paper explains that if Venus' $J_{22}$ (transverse gravitational quadrupole moment) were about the same magnitude as Earth's it would be far too weak for this synchrony to be induced by gravitational interaction between these two planets because the tidal forces from the Sun would overwhelm the effect:

The spin-orbit resonance between the two planets is undoubtedly due to the action of the Earth upon the net permanent de- formation (or transverse quadrupole moment) of Venus. But in order for this rather weak torque, which is significant only near inferior conjunction, to overcome the constant drag of solar tidal friction on the body of Venus, the permanent quadrupole moment required for Venus would have to be at least an order of magnitude larger than comparison with the Earth would suggest.

It then proposes that the tidal interaction with the Sun might be coincidentally cancelled by torque from Venus' atmospheric tidal effects. The paper discusses the history of understanding of transfer of angular momentum from a planets atmospheric tides to the planet itself:

It was first shown by Lord Kelvin (Thompson, 1882) that the Earth's atmospheric tides transfer angular momentum and energy from the orbit to the rotation and tend to accelerate the latter. Holmberg (1952) suggested that the associated production of mechanical energy might be sufficient to balance the dissipation of oceanic and solid body tides, so that the Earth's present rotation rate would be one of stable equilibrium over geological time. Subsequent studies, however, appear to confirm the older view that the Earth is in fact slowing down; i.e., that the energy loss in conventional tides exceeds the input through atmospheric tides. Nevertheless, the notion that a planet's rotation rate might be stabilized in the balance between the opposing two kinds of tides is perhaps the key to the resonant rotation of Venus.

and concludes (in 1969) that this is probably what's happening. This is the extent of my answer, certainly in the fifty years since this paper it's been looked at in greater detail, but as far as I can tell there are no competing theories.

Update: The problem was also addressed by (Ingersoll and Dobrovolskis 1978) in Venus' rotation and atmospheric tides and by (Bills 2005) Variations in the rotation rate of Venus due to orbital eccentricity modulation of solar tidal torques J. Geophys. Res. 110, E11007

More recently Auclair-Desrotour, Laskar & Mathis (2017) Atmospheric tides in Earth-like planets A&A 603, A107 have addressed the general topic in great detail and Venus is examined in great detail, but I can't tell if they address this subject directly or not.

The paper also describes the rapidly evolving studies of Venus by Earth-based radar observation in the 1960's such that by 1969 Venus' apparent synchronicity became obvious at about the same time the Moon landings began. Radar studies of Venus started early, as discussed in 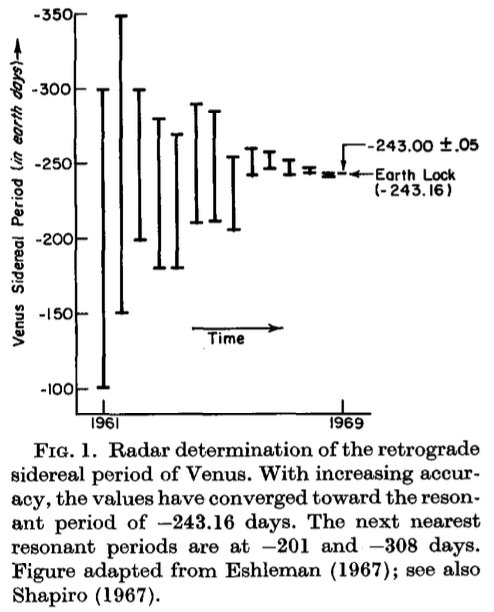 FIG. 1. Radar determination of the retrograde sidereal period of Venus. With increasing accur- acy, the values have converged toward the reson- ant period of --243.16 days. The next nearest resonant periods are at -201 and -308 days. Figure adapted from Eshleman (1967); see also Shapiro (1967).

This is a fun little problem that's remarkably close and the math is pretty easy when you use the right periods.

Eccentricity in this case, doesn't matter, so, even though Earth will move different amounts in those 218 days past the first full year, it's the average that matters.

A cool property of tidal locking is that the locked objects can move ahead or behind and it doesn't undo the locking. For example, our Moon is tidally locked but its eccentricity still creates libration. Pluto can move ahead of or fall behind its 3/2 resonance with Neptune, but Neptune's gravity draws it back, so it never laps the 3/2 resonance. It stays locked. All we need is the average synodic period, or 583.92 days.

.03% is closer than many tidally locked objects' periods can be, but that doesn't mean they're tidally locked. One can still lap the other.

His numbers on the video looked wrong to me at first, but he uses sidereal year, not the more familiar tropical year. Most of us think of an Earth year as 365.2422 days, not 365.256 or 365.26 as he writes on his video. I don't think it makes a big difference which we use, tropical or sidereal years. That only changes the numbers slightly. Both still fall to about 3 parts in 10,000.

His numbers posted on the video:

Footnote: @BMF posted a research paper that says Earth may have an effect on Venus' rotation speed - copied here. I'm going to leave my "it's coincidence" comments above, because it seems more likely to me that it's coincidence, but maybe I'm wrong.

According to Wikipedia, the orbital relationship between Venus and the Earth is coincidental and not because they are locked in a true orbital resonance, but it may be due to a true resonance in the past, or the system may be evolving toward a resonance in the future.

A number of near-integer-ratio relationships between the orbital frequencies of the planets or major moons are sometimes pointed out (see list below). However, these have no dynamical significance because there is no appropriate precession of perihelion or other libration to make the resonance perfect (see the detailed discussion in the section above). Such near resonances are dynamically insignificant even if the mismatch is quite small because (unlike a true resonance), after each cycle the relative position of the bodies shifts. When averaged over astronomically short timescales, their relative position is random, just like bodies that are nowhere near resonance.

For example, consider the orbits of Earth and Venus, which arrive at almost the same configuration after 8 Earth orbits and 13 Venus orbits. The actual ratio is 0.61518624, which is only 0.032% away from exactly 8:13. The mismatch after 8 years is only 1.5° of Venus' orbital movement. Still, this is enough that Venus and Earth find themselves in the opposite relative orientation to the original every 120 such cycles, which is 960 years. Therefore, on timescales of thousands of years or more (still tiny by astronomical standards), their relative position is effectively random.

The presence of a near resonance may reflect that a perfect resonance existed in the past, or that the system is evolving towards one in the future.

Here's a relevant diagram from the same article: 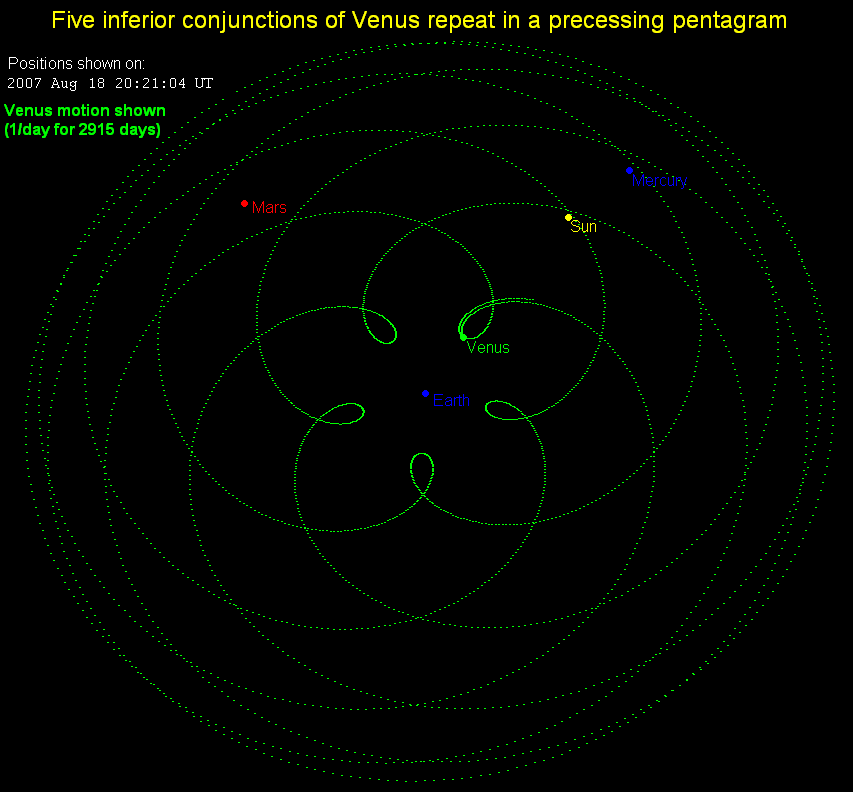 Depiction of the Earth:Venus 8:13 near resonance. With Earth held stationary at the center of a nonrotating frame, the successive inferior conjunctions of Venus over eight Earth years trace a pentagrammic pattern (reflecting the difference between the numbers in the ratio).

This "near-resonance" means that transits of Venus occur in a regular pattern:

Transits of Venus are among the rarest of predictable astronomical phenomena. They occur in a pattern that generally repeats every 243 years, with pairs of transits eight years apart separated by long gaps of 121.5 years and 105.5 years. The periodicity is a reflection of the fact that the orbital periods of Earth and Venus are close to 8:13 and 243:395 commensurabilities.

There are several examples of true orbital resonance in the solar system. The most well-known involves the Jovian moons, Ganymede, Europa, and Io.

Not the answer you're looking for? Browse other questions tagged venus celestial-mechanics .

5
How fast does Venus move as seen from the earth?
5
What causes objects to become tidally locked?
7
Can we find rocks from Venus or Mercury on Earth?
14
Is there any way for a planet orbiting a red dwarf in the habitable zone to not be tidally locked?
3
Requirements for a satellite/planet to be tidally locked to a planet/star
1
Do we see planet venus everyday?
6
Why Venus evolved so differently from Earth?
1
What celestial mechanics parameters define a lunar occultation of Venus visible from Earth?
8
Phosphine on Venus?