Why do gas giants have clearly delineated surfaces, whereas the Earth's atmosphere fades into space?

Why do gas giants appear to have clearly delineated surfaces, whereas the Earth's atmosphere fades into space?

Is it just a matter of scale? Or is there some form of "surface-tension" for the hydrogen gas?

In an isothermal atmosphere, the exponential scale height of the atmosphere is $$ h \sim \frac{k_\mathrm B T}{\mu g},$$ where $g$ is the gravitational field, $\mu$ is the mean mass of a particle and $T$ is the temperature (in kelvin).

i.e. The pressure/density of the atmosphere falls exponentially, with an e-folding height given by the above expression.

Jupiter is half the temperature, 11 times the radius and with 3 times the gravity of Earth. However $\mu$ is about ten times smaller (hydrogen vs nitrogen/oxygen). Overall that means $h/R$ for Jupiter is of order 5–10 times smaller than for Earth and so it will appear "sharper". 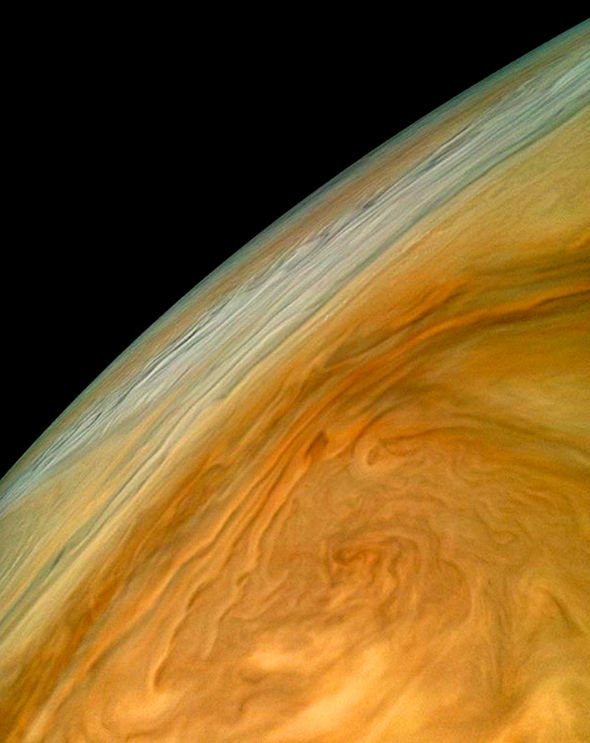 Not the answer you're looking for? Browse other questions tagged planetary-atmosphere jupiter gas-giants or ask your own question.

3
Is Jupiter as opaque as it looks?

12
What will happen when landing on Jupiter?
1
Why are gas giants colored the way they are?
7
Is it accurate to compare comets to clouds and rain?
2
Can IR sensitive cameras read signals from Venus's surface emissions?
15
Characteristics of the first planets in the Universe?
3
Air molecules per cubic foot at a certain altitude above the surface
6
If water vapor is always blown away into space, how is it able to create chemical compounds on Venus?
5
Solar wind, Earth wind and planetary winds?