Has optical interferometry been done at radio frequency using heterodyning with a laser in a nonlinear material?

If one collects narrow band optical emission from a large telescope with frequency $f_1$ and mixes it in a nonlinear crystal with laser light of a nearby frequency $f_2$, it would produce two new signals at $|f_1+f_2|$ and $|f_1-f_2|$.

The difference signal $|f_1-f_2|$ could be picked up electromagnetically or perhaps it would be detectable as an AC component in a photodetector somehow, perhaps the photodetector would be the nonlinear element itself.

Is this "a thing"? Has anything like this been done or at least tried?

Perhaps I've got it, or them.

These may be what I was thinking of, an optical intensity interferometer based on the Hanbury Brown and Twiss effect effect, but down-converting via heterodyning with lasers.

However: instead of the heterodyne down-conversion process happening in an optical crystal producing radio waves that are electrically amplified, mixing and detection happens in a semiconductor crystal acting as a photodiode and the output signal being photoelectron current. So this is not exactly what was described in the question. Since this is more likely to be the right way to do the measurement, probably I mis-remembered the conversion to radio followed by electronic amplification.

The paper has a nice explanation of the effect and the measurement they are proposing.

There is light amplification and photons are bosons, etc.

We consider the possibility of measuring the true width of the narrow Fe II optical lines observed in spectra of the Weigelt blobs in the vicinity of Eta Carinae. The lines originate as a result of stimulated amplification of spontaneous emission of radiation in quantum transitions between energy levels showing inverted population (Johansson & Letokhov, 2002, 2003, 2004). The lines should have a subDoppler spectral width of 30-100 MHz, depending on the geometry of the lasing volume. To make measurements with a spectral resolution of R > 107 and an angular resolution better than 0.1 arcsec, we suggest the use of the Brown-Twiss-Townes optical heterodyne intensity correlation interferometry. The estimates made of the S/N ratio for the optical heterodyne astrophysical laser experiment imply that it is feasible.

and more importantly from the introduction:

The Brown-Twiss correlation interferometry (Hanbury Brown & Twiss, 1956; Hanbury Brown, 1974), modified by heterodyne detection using a CO2 laser as a local oscillator (Johnson et al., 1974) for the 10 µm region, is well suited to achieve very high angular and spectral resolution simultaneously. We will call this method the Brown-Twiss-Townes (BTT) technique. In the range 0.9-1.0 µm this can be done today by means of two spatially separated telescopes equipped with two heterodyne photoreceivers, e.g. avalanche diodes, and a tunable semiconductor laser diode transporting its radiation via an optical fiber (Sect. 3). A general approach of this method has already been considered and discussed in a non-astronomical journal (Lavrinovich & Letokhov, 1976; Letokhov, 1996). In the present paper, we focus on the use of the BBT correlation heterodyne interferometry to study the Fe II laser lines in the range 0.9-1.0 µm and the appropriate signal-to-noise (S/N) ratio estimates (Sect. 4).

To master new wavelength regions and achieve high spectral resolution levels, the intensity interferometry method was modified to become heterodyne interferometry (Johnson et al., 1974). This technique uses a local monochromatic laser oscillator to produce beats between the light wave of the star of interest and the coherent laser wave of the local oscillator. The method can be considered intermediate between intensity interferometry and direct interferometry. Townes and co-workers made successful observations in the 10-µm infrared window of the atmosphere using a CO2 laser as a local oscillator (Johnsson et al., 1974; Townes, 1977). The baseline used consisted of a pair of auxiliary telescopes spaced a few meters apart at Kitt Peaks solar telescope.

A spatial interferometer for 10-μm wavelength which uses two independent telescopes separated by 5.5 m, heterodyne detection of the infrared radiation, and path equalization by a variable-length rf cable, has given interference fringes from radiation of the planet Mercury. Continuous fringe observations during 4000 sec indicate remarkable stability in the optical-path difference through the atmosphere and the two telescopes, fluctuations between 20-sec averages being about 1/6 of the 10-μm wavelength.

A detailed description is given of the Infrared Spatial Interferometer (ISI), developed at the Space Sciences Laboratory of the University of California at Berkeley, which is a high spatial resolution interferometer for mid-infrared wavelengths. The instrumentation, its capabilities and performance, data analysis, science program, and future plans are all discussed. The system's use of heterodyne detection, analogous to that of a modern radio interferometer, is also compared with the homodyne or direct methods more commonly encountered in the visible and infrared. The ISI has been operating productively on Mount Wilson for the past 10 years measuring materials immediately surrounding stars and their changes as well as some stellar diameters. The new spectral capabilities described here, a recent increase in baseline length, and the upcoming expansion to a closure-phase imaging array provide important additional types of measurements. 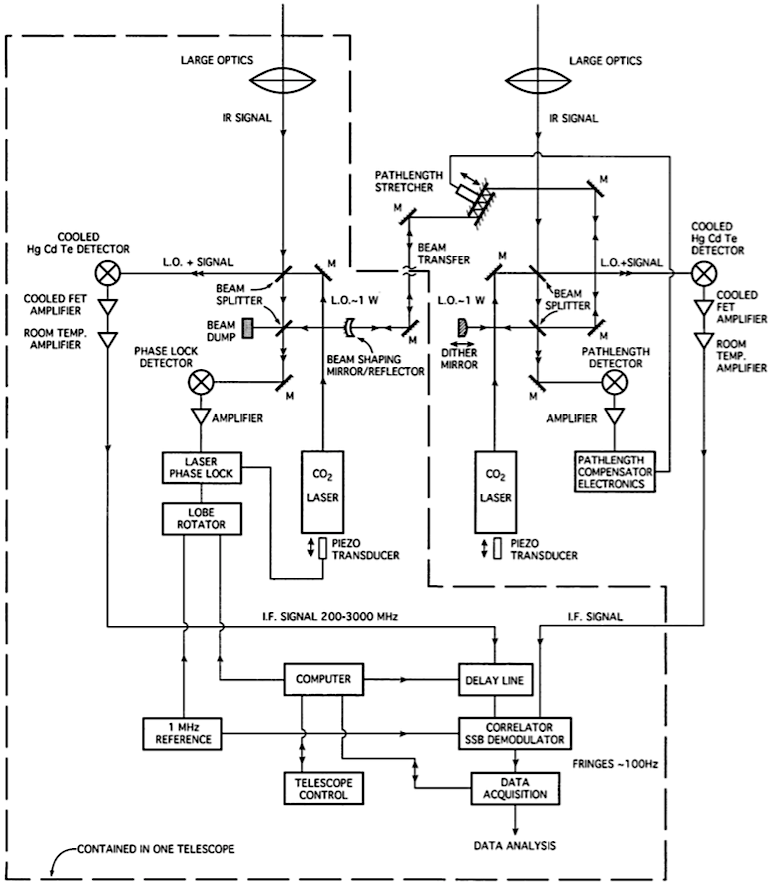 FIG. 1. Conceptual block diagram of the ISI optics, circuitry, and heterodyne detection system, including laser phase lock and path length compensation systems. Telescope 1 and its trailer, with associated optics and circuitry, is enclosed within the dashed line. Telescope 2 is represented by equipment outside the dashed line. The trailer for telescope 1 is the primary operating location, with the central computer, delay line, correlator, and data acquisition equipment. Telescope 2 and its trailer contains path-length compensation equipment in addition to the necessary optics and detection hardware. When a third telescope is installed, the controls, delay lines, data acquisition, correlators, and other equipment not needed in each single telescope, will be housed in a central station.

Not the answer you're looking for? Browse other questions tagged observational-astronomy radio-astronomy interferometry radio or ask your own question.

19
Why do small mirror imperfections matter with modern computers
16
Is Optical VLBI theoretically feasible? If not why not?
6
What's the highest frequency that's been imaged by a radio telescope?

5
What determines which frequency range a radio telescope has?
7
Are there any astronomical phenomena that could emit strong radio waves with multiples of a discrete frequency?
15
Has radio astronomy ever been done on objects that appear very close to the Moon? Is this avoided?
6
What's the highest frequency that's been imaged by a radio telescope?
1
In the 1950's how were radio-astrometric positions with portable dishes so precise they could be assigned to their dim optical counterparts (Quasars)?
4
What is the significance of using baseline pairs in radio interferometry?
4
What is the significance of the velocity resolution in spectral line observations using radio interferometry?