How did DSCOVR capture the Moon's shadow on Earth during the August 21 2017 solar eclipse without the Moon itself also being visible?

In this gif you can clearly see the Moon's shadow moving from the West Coast of the U.S. towards the East Coast during the August 21 2017 eclipse.

DSCOVR (the satellite that imaged this) is located at the L1 point, which is exactly between the Earth and the Sun, meaning it always sees the sun-lit part of Earth.

But for a Solar eclipse to happen, the Moon also has to be exactly between the Earth and the Sun, and thus it should be visible in this gif.

At first I thought it was because DSCOVR was closer to Earth than the Moon was, but it's actually more than 3 times farther away.

DSCOVR is in a large Lissajous orbit around the Sun-Earth L1 point, about 1,500,000 kilometers from the Earth. At this point it is far from the line drawn between the Sun and Earth; if the Sun were behind you and you were looking at the Earth-Moon-DSCOVR system, you would say that the spacecraft is down and to the right by several hundred thousand kilometers.

I've used the Python package Skyfield plus a location for DSCOVR from JPL's Horizons to plot their positions. Earth is large and blue, the Moon is green (cheese) and smaller, and the very tiny black spot is DSCOVR. In each case I've annotated DSCOVR's position.

I've done some rotations so that my X-axis passes through the centers of the Sun and the Earth during the eclipse.

If I get a chance I'll make a 3D plot of DSCOVR's orbit. The script I used can be found in https://pastebin.com/AXsJM8J1 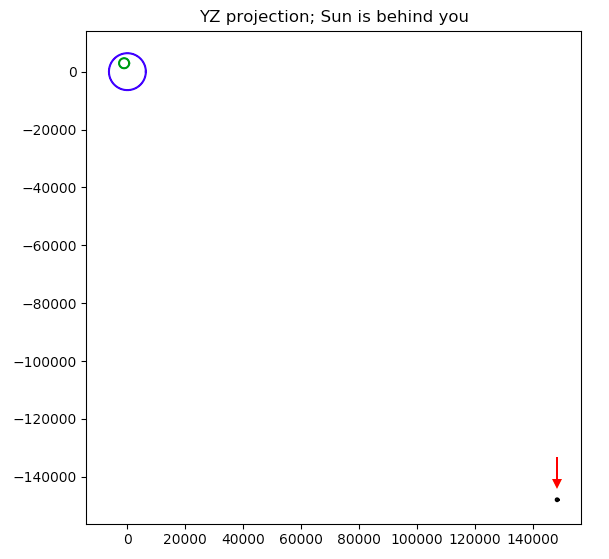 2
Why does the eclipse in this video look annular?
4
When the moon eclipses the sun what direction is darkened first: left or right?
6
Might someone see changes to the corona during a solar eclipse?
3
Would an extremely bright star produce same kind of shadow band effect as seen in solar eclipses just before totality?
3
Why can't we observe a solar eclipse and the preceding/following lunar eclipse from the same place?
14
Is it possible that the shadow of The Moon is a single dot during solar eclipse?
18
During an eclipse, how big is the shadow of the moon on the earth?
3
How much of the Sun's disk must be covered for a visible shadow to be cast?
3
Sun traveling North & South in this graphic?