In the 1950's how were radio-astrometric positions with portable dishes so precise they could be assigned to their dim optical counterparts (Quasars)?

In my question Why are quasars so far away that they couldn't be optically resolved in the 1950's? I included the following short paragraph, but then added strikethrough to the second sentence and added a parenthetical based on @DavidTonhofer's comment.

So today instead of "quasi-stellar" we might simply say "unresolved". The light is star-like because the light from galaxies has a strong stellar component. (this second sentence is argued against in comments)

I then read further and found this short but informative historical account in University of Manchester's Jodrell Bank Centre for Astrophysics page The MKI and the discovery of Quasars:

To the surprise of the astronomers quite a number were found to have exceedingly small angular sizes - so small in fact that their images on a photographic plate would look like the images of stars. Much work then went into finding the precise location of these objects and finally it was possible to obtain their spectra. They were nothing like the spectra of stars or galaxies and remained a puzzle for some time. Finally it was realised that the reason that the spectra were so different was that the objects were so far away that their light was greatly red shifted. They were at very great distances away from us and so it was not surprising that their images were so small!

Because their images looked liked those of stars they were called Quasi-Stellar-Objects or QUASARS for short.

Question: In the late 1950's how were astrometric positions of these radio sources made so precisely that they could be assigned unambiguously to dim, star-like spots on photographic emulsions? 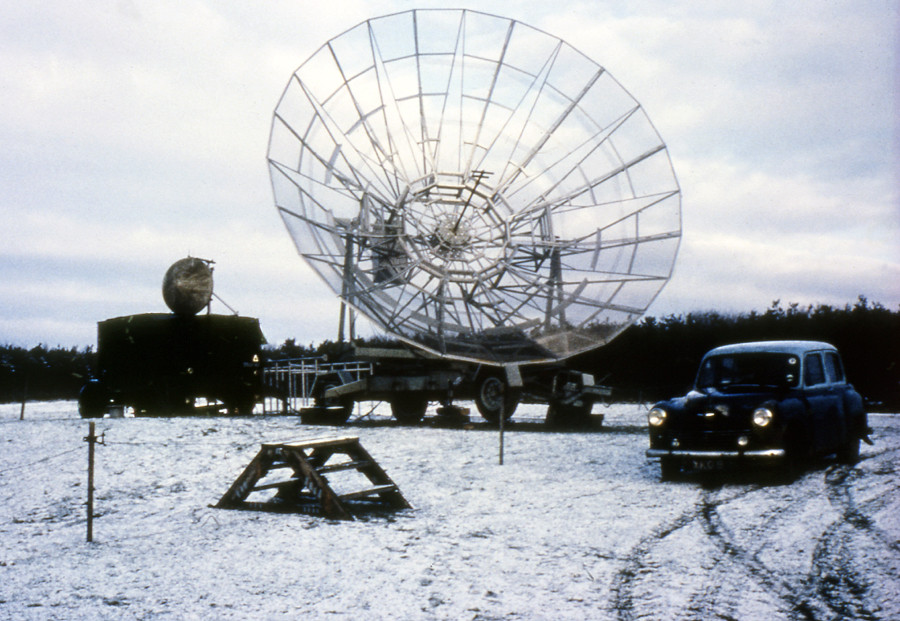 In many cases in astronomy, there’s a difference in finding the position of something precisely vs. seeing detailed structure in that object. In the former case, what you need to do is to find the centroid of the image. So even with relatively coarse spatial resolution, you can often get very precise positions because you can centroid the images very well. (EDIT: However, this may not apply to early radio observations because single-dish radio telescopes don’t form images.)

Specifically for 3C273, the first quasar identified, Wikipedia says that its position was refined with lunar occultation. This technique involves observing a source as the Moon approaches it and determining the precise moment when it disappears behind the edge of the Moon. Here you need to measure time precisely and to know the Moon's path very well.

Also see this answer to Has radio astronomy ever been done on objects that appear very close to the Moon? Is this avoided?

The first radio source to have a star-like optical counterpart associated with it was 3C84, and that was done by measuring the radio position precisely using interferometry, i.e. combining signals from multiple telescopes.

So I think that this was not in fact possible with single-dish radio telescopes in the 1950s, and required more advanced techniques that came a bit later.

Not the answer you're looking for? Browse other questions tagged observational-astronomy radio-astronomy history quasars astrometry or ask your own question.

15
Has radio astronomy ever been done on objects that appear very close to the Moon? Is this avoided?
3
Why are quasars so far away that they couldn't be optically resolved in the 1950's?
3
Is GAIA the only game in town for looking at quadrupole gravitational deflection of light?
1
Why did it take five years to "figure out" how to use astrometric calibration sources to deblur LOFAR images?

9
Why the blank wedges in this very early 21 cm map of the Milky Way? (Oort et al. 1958)
1
How do they know how far out Farout is? (2018 VG18)
4
Are quasars simply AGNs that are viewed from a particular angle?
7
Why does the Event Horizon Telescope (EHT) not include telescopes from Africa, Asia or Australia?
13
What will it finally take to accurately measure the distance to Betelgeuse?
1
Why did it take five years to "figure out" how to use astrometric calibration sources to deblur LOFAR images?
0
Did the Spectr-R space-based radio telescope use on-board accelerometer to measure non-gravitational acceleration for baseline correction?