Does a merging massive binary black hole ‘emits’ more than one gravitational wave?

If we want to use gravitational waves (GW) to determine the Hubble constant, we need to find the source in the electromagnetic spectrum (EMS). However, we need to be lucky to ‘see’ it simultaneously in EMS and GW. This is a problem, but do BBH not ‘emit’ more than one GW? E.g. every time they spiral? Because than we have time to find it in the EMS, no? What makes it so difficult? Thanks in advance!

We can currently only detect gravitational radiation when it is extremely intense: in the last fraction of a second. For example the first gravitational wave detection lasted less 0.15 seconds. The black holes are releasing gravitational radiation with every orbit, but that radiation is too weak for us to detect. It takes a colossal amount of energy being released for it to be detected by current technology. The inspiral of GW150914 released 3 solar masses of energy, nearly all in the final 0.15 seconds before merger. Even so this only distorted space by less than 1/10000 of the diameter of a proton. It is this that makes it so difficult.

The duration of a gravitational wave detection is not particularly important in detecting electromagnetic counterparts, although the fact that they are not recurrent or repeating sources is.

This means that as a binary system spirals inwards towards merger, the frequency of the signal rises and the power of the signal rises - known as a "chirp". This is a one-way process; once the binary has finished merging, the gravitational wave emission essentially stops.

Gravitational wave detectors are able to detect merging binaries once their frequency enters the sensitive range of the instrument (roughly 20 Hz to 2 kHz) and the gravitational wave is "loud" enough to be detected. The rate of development of the "chirp" increases with increasing mass. A massive black hole binary will scan through frequencies from 20 Hz to perhaps 200 Hz (when it merges) in less than a second. A lower mass neutron star binary might be detected from 20 Hz to 1 kHz over tens of seconds.

Detecting the electromagnetic counterpart does not have to be simultaneous. Whilst some EM signatures are likely to be prompt (e.g. Gamma ray bursts) on timescales of seconds, the development of a kilonova from merging neutron stars, takes hours or even days (Smartt et al. 2017). Recent work on possible EM counterparts to merging black hole binaries, embedded in accretion disks, even suggests there may be a delay of tens of days before seeing any EM counterpart (Graham et al. 2020).

The key is not so much the time over which the gravitational wave source is detected, as being able to determine its direction and distance well and hence narrow down the field of view (and volume of space) to be searched by EM telescopes. To do this effectively requires the signal to be detected by multiple instruments (e.g. the two LIGO detectors and VIRGO). It is true though that if a gravitational wave source were recurrent, it could be better located in the sky.

EDIT: To address mmeent's interesting comment. The duration of the GW signal does become a factor if it enables the source to be located more precisely. This will happen if the orientation of the interferometer changes with respect to the source position during the observation. For the current ground-based interferometers, this means the rotation of the Earth changes the detector orientation in space, so means the GW duration would need to be an hour or longer.

(NB: There is ample room for numerical errors in the calculation above, so feel free to check it!)

Just a supplement to @JamesK's excellent answer. The image below (from Caltech/MIT by way of New Sciencist) 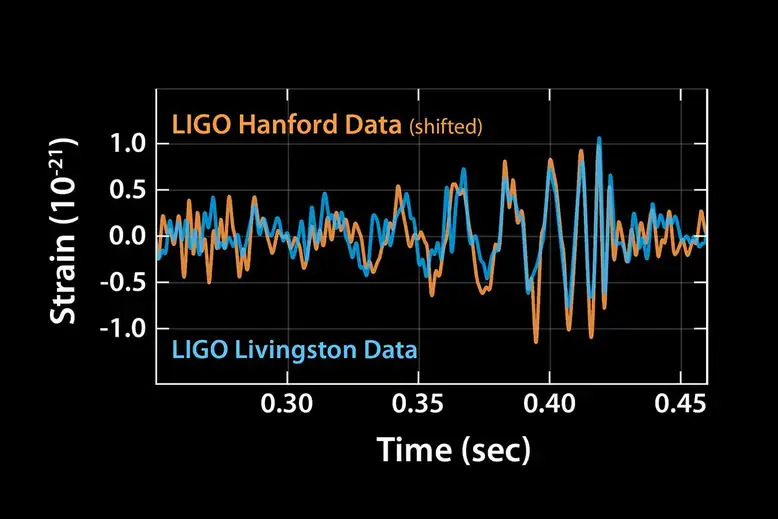 shows what was detected for one collision. On the left (at the start) the blackholes orbit one another about every 0.03 seconds, but the waveform is too faint to detect. At about 0.3 seconds on the Time axis the waves start being detectable and the increase in strength and decrease in duration as the black holes spiral closer over the next 0.12s. The merge happens at about 0.42 and then there is a short, rapidly fading patten called "ringdown" as the black hole settles to its final form. So yes, there are multiple waves (about 8 detectable ones in this example) but they all arrive at almost the same time.

Not the answer you're looking for? Browse other questions tagged black-hole cosmology general-relativity gravitational-waves hubble-constant .

1
Can the electromagnetic counterpart of a gravitational be seen by 'small' telescopes?