How to understand exactly why gravity darkening happens on rotating stars?

The assymetric dip in the light curve comes from a near-polar transit across a rotating, oblate star where the poles are hotter and therefore brighter due to gravity darkening:

KELT-9’s high internal angular momentum ($\nu \sin(i)$ = 111.4 ± 1.3 km/s) flattens it into an oblate spheroid, making the equatorial radius of the star larger than the polar radius. Additionally, the star’s abundant centrifugal force near its equator distorts its hydrostatic equilibrium, causing its effective temperature to vary by nearly a thousand Kelvin over the surface of the star. These two effects of stellar oblateness and varying effective temperature – together commonly referred to as gravity darkening (Barnes 2009) – change the total irradiance on KELT-9 b (Ahlers 2016).

When a star is oblate, it has a larger radius at its equator than it does at its poles. As a result, the poles have a higher surface gravity, and thus higher temperature and brightness.

Question: Why exactly does the increased surface gravity at some places on a given star lead to a higher temperature at those locations? Is it related to the difference in scale heights? The surface brightness relates to the temperature at the photosphere, is the reason simply that a higher pressure therefore higher temperature is needed to support the same density in a higher gravitational field? 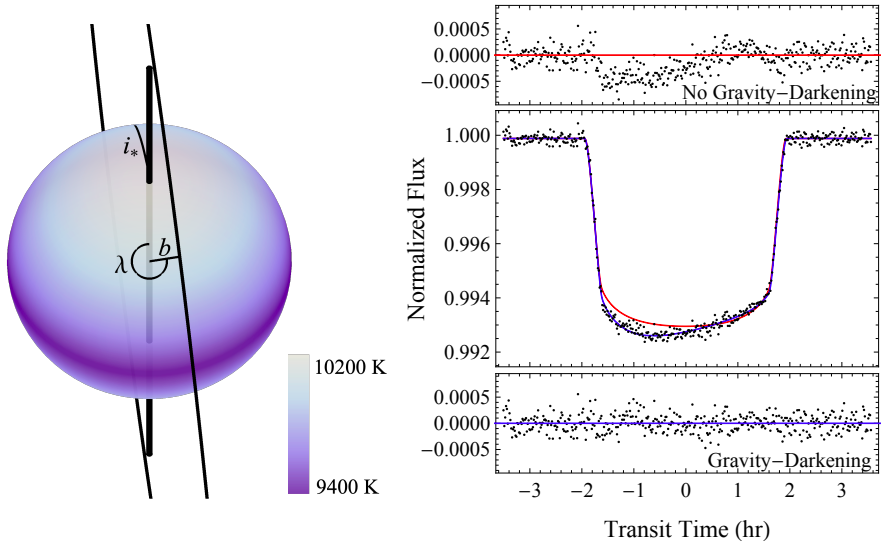 Figure 2. (Left) KELT-9 b begins its transit near the star’s hot pole and moves toward the star’s cooler equator. Our transit analysis directly measures the stellar inclination (i★), the planet’s projected alignment (λ), and the orbital inclination (i.e., the impact parameter b). We find that KELT-9 varies in effective temperature by ∼ 800 K between its hot poles and cooler equator. (Right) KELT-9 b’s phase-folded primary transit from TESS. The transit depth steadily decreases throughout the eclipse, indicating that KELT-9 b begins its transit near one of the host star’s hotter poles and moves toward the dimmer stellar equator.

Hydrostatic equilibrium means that the local pressure gradient is proportional to the local density multiplied by a latitude-dependent local gravity. If the pressure just depends on density and temperature, this means that those quantities will also just depend on latitude and therefore will be constant along an equipotential surface. i.e. pressure, temperature and density are functions of the effective gravitational potential $\phi$.

For stars with radiative outer envelopes, the heat flux is proportional to the temperature gradient, multiplied by some stuff (like inverse opacity) that just depends on density and temperature.

The missing step in this argument is to show the $f(\phi)$ is constant. Given that the photosphere is defined as where the optical depth is some fixed value (usually 1 or 2/3), and may be assumed to depend only on temperature and density, then this also lies on an equipotential. But $dT/d\phi$ also only depends on $\phi$ and so must also be constant along an equipotential.

For more detail, although missing the last paragraph above(!), see https://www.astro.umd.edu/~jph/Stellar_Rotation.pdf .

The situation is much more complex for stars with convective envelopes or differential rotation and I think can only be tackled through detailed modelling.

From the same Wikipedia page:

So it appears that the equatorial bulge is caused centrifugally via rapid rotation (as expected). This outwards-directed force relieves the pressure acting inwards arising from gravitational contraction, and of course temperature is proportional to pressure. Therefore surface temperature will be higher at the poles than the equator.

Not the answer you're looking for? Browse other questions tagged exoplanet rotation stellar-astrophysics stellar-structure .

4
Photosphere is relatively transparent. Is that right?
0
What is the density profile within the Sun's photosphere? Which one of these is wrong?

8
How well can we in principle determine $T_{\textrm{eff}}$ of a star?
3
Why is the cloud around Eta Carinae shaped the way it is?
11
How does a star's rotation affect a star on the main sequence?
9
How would water-ammonia oceans behave?
1
How does the surface gravity on Mars vary between the equator and its poles?
0
Calculate mass of exoplanet from transit method
6
After only one eclipse of its X-ray bright primary, how can astronomers estimate the first extragalactic exoplanet's period to be about 70 years?