How imperceptible will the 4-July-2020 penumbral lunar eclipse be?

But on the sidebar there is an image that shows the outer edge of the penumbra cutting across the center of the Moon at maximum, which means half of the Moon will be full brightness and the other have only partially shadowed by the Earth.

Question: How much darker with the eclipsed half of the Moon get at maximum? Just how "imperceptible" will the 4-July-2020 penumbral lunar eclipse really be?

Source and caption in the main Wikipedia article: 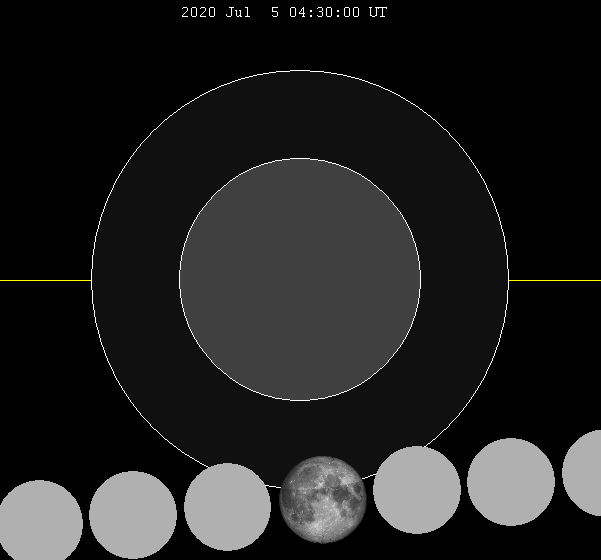 Completely imperceptible except to instruments.

In general, most people don't notice the penumbral shadow projected on the moon until at least 70% of its diameter is covered. Some people who have very acute vision and better-than-average perception might notice an ever-so-slight shading when only 50% of the moon is inside the penumbra.

As your image shows, this is a lot less than 50%. Nothing will be observed by the naked eye. "Visible" in your first source only means "the moon will be above the horizon at this time". It doesn't mean you will be able to see a change or dimming of the moon.

Not the answer you're looking for? Browse other questions tagged amateur-observing lunar-eclipse brightness or ask your own question.

10
Red Moon a Characteristic of all Total Lunar Eclipses?
3
Can we know where (South, East, West…) the moon will be at a specific time?
7
Was that actually a shooting star during the supermoon eclipse on September 27th 2015?
0
Lunar Eclipse - Total darkness?
1
Calculating the date and year when a lunar eclipse will fall on the Winter Solstice
11
How much longer is this (July 27th 2018) lunar eclipse than others?
4
Why was the July 27th 2018 lunar eclipse not visible in North America?
3
Why can't we observe a solar eclipse and the preceding/following lunar eclipse from the same place?