In a more speculative corner of SE somebody was dreaming up a story of planets traveling between star systems through wormholes.

I was wondering how much the appearing/disappearing of a planet the size of Earth would perturb the orbits of the other bodies in a solar system like ours. After all, the bodies in the system all interact, and the current situation appears to me as the delicate result of an evolution during which bodies collided, were ejected or were nudged into specific (dynamic) "places" which are stable, for example because they resonate with or are far enough away from others.

How much havoc would the sudden appearance of an Earth-sized planet in the habitable zone wreak on this balance? Both long-term and short-term (on astronomical scales; short-term may be 100 years) disturbances are interesting. Would it directly perturb the orbits of nearby planets (in our case Earth and Mars) enough to be prohibiting? For example, even relatively minor changes of the orbit can have an impact on climate.

Could it lead to catastrophic events much later, for example because some Trojan bodies are pushed out of their Lagrange neighborhood and start marauding the Solar System, increasing the chance of catastrophic impact events on Earth or an inhabited Mars?

There is essentially no room in our habitable zone for another Earth-sized planet. The exact timescale for instability would depend on the details of where you put it, but the system couldn't survive long term.

Most investigations of the long-standing question of solar system stability (without any additional planets) find that the system is stable in the long term with about 99% probability, e.g. this page by Scott Tremaine and this discussion on Wikipedia, but that there is some chance of instability even with the current set of planets, and no room for another.

It appears that many extrasolar planetary systems are "full" as well, although selection effects make it hard to know whether there are planets we aren't seeing in systems that aren't yet known to have multiple planets.

The "fullness" of these solar systems suggests that it may be that even more planets form initially, but then some are ejected until the system reaches a stable configuration.

Interestingly, in our own inner solar system, the place where there is the most dynamical space for another planet is inside the orbit of Mercury, say with a semimajor axis of 0.1 AU or so. That might seem counterintuitive, since the spacings between Earth (1 AU), Venus (0.7 AU), Mercury (0.4 AU), and a planet at 0.1 AU would all be about 0.3 AU, the same in absolute terms. But what matters most for stability is the ratio of the semimajor axes, so Mercury to an inner planet would be a factor of 4, whereas Earth/Venus is only 1/0.7 = 1.4.

Such a planet isn't in the habitable zone, and it likely wouldn't be stable on very long timescales with our current configuration of other planets, but we do know that many (perhaps even most) extrasolar planetary systems have planets at those very small orbital radii - see the image below, made from data from the NASA Exoplanet Archive. There are strong selection effects there (close-in planets are the easiest to detect with both the transit and radial velocity methods), but the high frequency does tell us that such planets are relatively common and can have stable orbits. 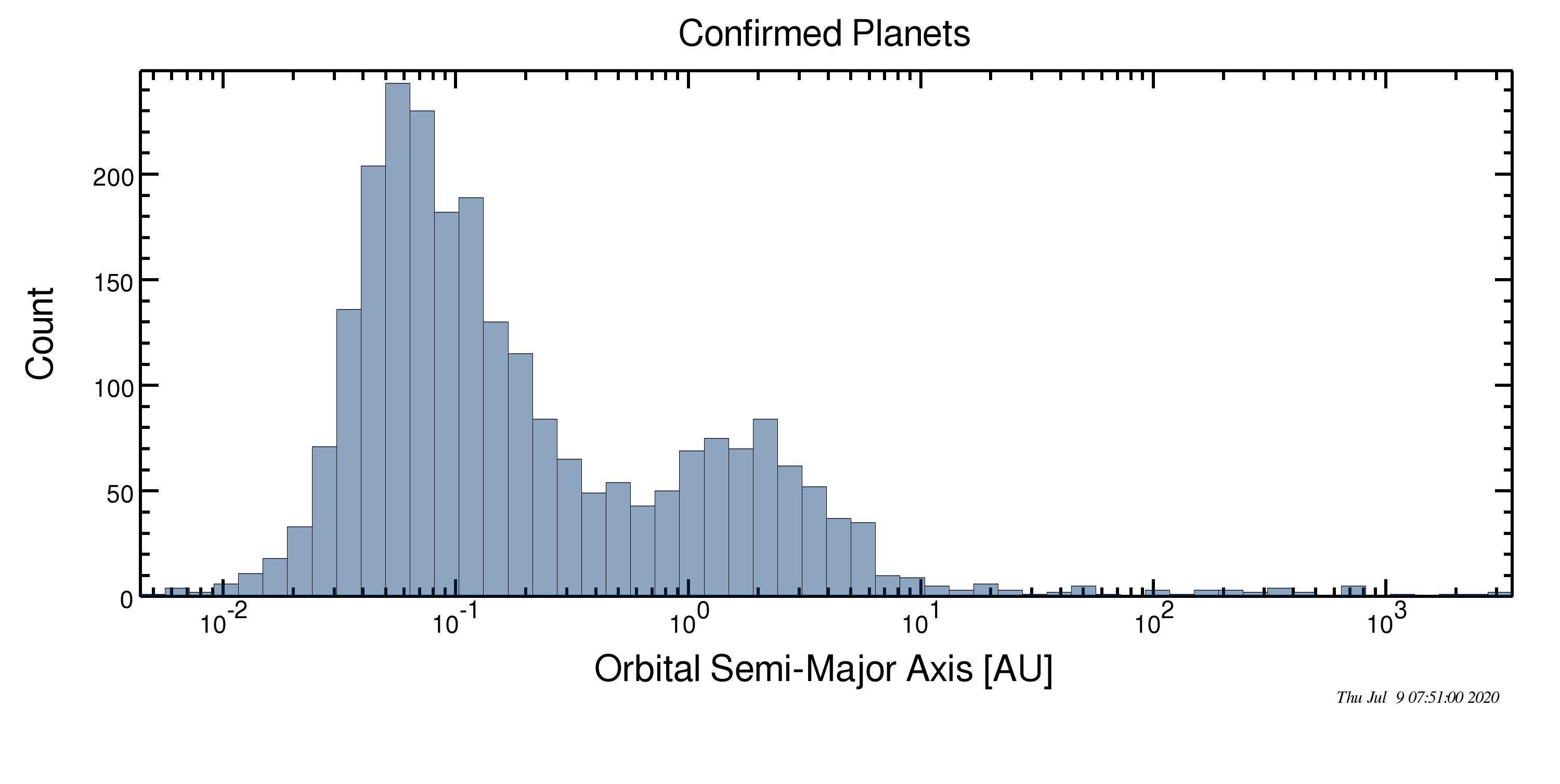 3
Have any co-orbital exoplanet pairs been discovered (and not subsequently retracted)?

3
Could Hot Jupiter systems sustain Trojans?
4
Can a solar system exist where the second planet rotates fast, and the third planet is tidally locked to their star?
3
How to Calculate Planetary Equilibrium Temperature in Binary systems
5
What variables are needed to calculate simple horseshoe orbit times?
11
Are the orbits of all triple star systems at least technically unstable?
2
Do Astronomers really never call Lagrangian points "libration points"?
4
Probability of planets in binary star systems?
6
When will Callisto be in orbital resonance with the rest of Jupiter's big moons?