How did Kepler come to the potencies in his Third Law?

How did Kepler come to the conclusion, that exactly the square of the period and the third potency of the great semi-axis of the ellipse is proportional? Why is only square divided by cubic = constant? Why do other dimensions not work? Kepler certainly did not simply try all potencies. Isn't this a similar problem to Fermat's last theorem?

If you plot the log of the period against the log of the semi-major axis then it is obvious that $P^2 \propto a^3$. Any other power law relationship simply wouldn't fit. 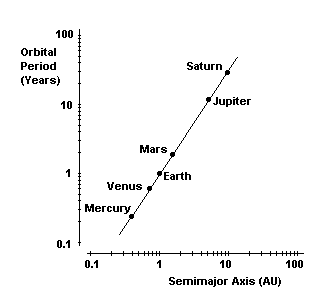 Is it just coincidental that John Napier's "Mirifici Logarithmorum Canonis Descripto" (published in 1614) was first seen by Kepler towards the end of the year 1616? We know that Kepler was immediately enthusiastic about logarithms, which is not surprising, considering the masses of computation involved in preparing the Rudolphine Tables. Indeed, he even wrote a book of his own on the subject in 1621. It's also interesting that Kepler initially described his "Third Law" in terms of a 1.5 ratio of proportions, exactly as it would appear in a log-log plot, rather than in the more familiar terms of squared periods and cubed distances. It seems as if a purely mathematical invention, namely logarithms, whose intent was simply to ease the burden of manual arithmetical computations, may have led directly to the discovery/formulation of an important physical law, i.e., Kepler's third law of planetary motion. (Ironically, Kepler's academic mentor, Michael Maestlin, chided him − perhaps in jest? − for even taking an interest in logarithms, remarking that "it is not seemly for a professor of mathematics to be childishly pleased about any shortening of the calculations".) By the 18th of May, 1618, Kepler had fully grasped the logarithmic pattern in the planetary orbits:

Not the answer you're looking for? Browse other questions tagged mathematics kepler johannes-kepler or ask your own question.

25
How did Kepler "guess" his third law from data?

25
How did Kepler "guess" his third law from data?
4
What decided how the Kepler space telescope was pointed?
1
What happened to the third planet in the Kepler-47 system?
1
Where can I download processed data of the Kepler telescope?
5
How to derive Kepler's 1st Law?
4
Plotting The Kepler Field Full View
7
Why can't we use the semi-minor axis in Kepler's third law?