on/off filter and their photometric calibration

I am reading a paper here

An off band filter is usually self-designed? There is no unified standard(central wavelength, band width, etc. )?

Thank you. My questions are long, so I put them here.

We assume the continuum is flat, right? The off-band filter is for 1) photometric calibration, 2) discovering new sources?

The on- vs. off-band filter is to let you easily measure the strength of an absorption or emission line in the object's spectrum. "Off-band" doesn't refer to a shift in position, but rather in the wavelength that the filter lets through. It is "off" the wavelength of a particular spectral line.

This illustrates the idea: 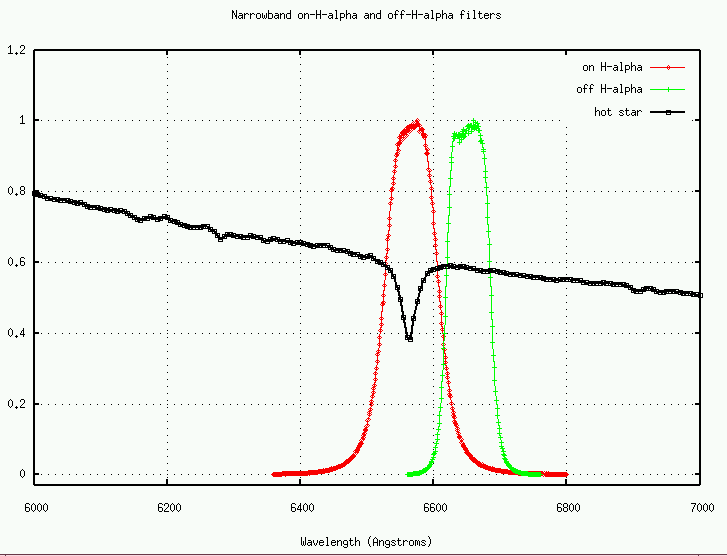 In this case, the light through the filter shown in red would be affected by the H$\alpha$ absorption line in the star's spectrum, while the light through the filter shown in green would not. So the ratio of the two would give you a very good measurement of how strong the line is, without worrying about how bright the star is overall, i.e. what the overall continuum level is.

In the paper you're reading, they would be looking for emission lines from planetary nebulae, but the idea is the same - the on-band filter measures line+continuum, and the off-band filter only measures continuum, so it lets you correct for the continuum emission and measure only the line strength.

The design of the filters would depend on which lines you're looking for. In this case they are targeting the [O III] line which is normally at a wavelength of 5007 Angstroms, but because they are looking at distant objects, the emission is red-shifted by the expansion of the universe, so they use a custom filter whose wavelength is shifted to match the red-shifted wavelength of that emission line for this particular group of galaxies.

Not the answer you're looking for? Browse other questions tagged photometry .

6
How can I convolve a template spectrum with a photometric filter response spectrum?
3
Why do different instrumental filters use different magnitude systems (Vega vs AB)?
1
How to collect photometric data for WW Aur
1
Relationship between photometric colour and redshift
1
How to determine the color term for a filter with a systematically bluer offset than the standard