Were radio spectroscopic observations ever used to first measure a distance successfully?

Usually, especially for an extragalactic object, its redshift is determined by optical spectroscopic redshift. But the angular resolution of early radio observations is poor and an optical counterpart needs time to be found. Is there any celestial object whose distance was determined firstly by the redshift of radio spectral lines?

Yes, radio spectra have been used extensively to find the distances and locations of HI regions and molecular clouds inside the Milky Way. Observations of the 21 cm hydrogen line and/or several carbon monoxide lines (in particular, $\text{CO}(1\to0)$) enable us to make radial velocity measurements of clouds within the galaxy. From there, some geometry (see Roman-Duval et al. 2009) allows us to determine the distance to the cloud, if the cloud lies farther from the galactic center than the Sun does.

Unfortunately, if the cloud is closer to the galactic center, there are two possible solutions for the distance between the cloud and the Sun, something called the kinematic distance ambiguity. It occurs because at two possible points along the line of sight - if the cloud's orbit is smaller than the Sun's - the projected cloud velocities are identical. There are a few ways we can try to do this, including HI absorption (Kolpak et al. 2003).

Here's a diagram to make the distinction clearer, from Roman Duval et al.: 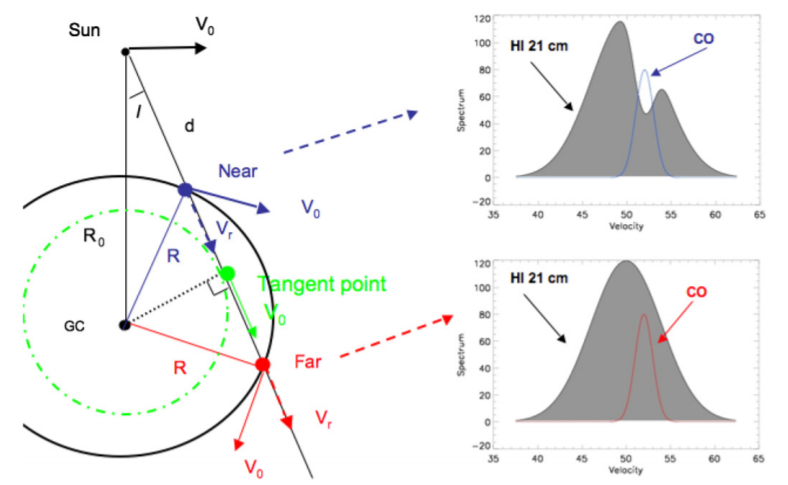 The technique has also been applied to extragalactic sources (though often lines in the optical region are used, even for radio galaxies). One example is the Leo Ring discovered by Schneider et al. in 1983. It's mostly neutral hydrogen, so the 21 cm line was initially used to derive a redshift, recessional velocity (a system velocity of $V=960\;\text{km s}^{_1}$) and distance. That velocity measurement corresponds to $d\simeq14\;\text{Mpc}$, fairly close to that of the Leo Group. I wouldn't be surprised if other extragalactic blobs of neutral hydrogen have also had their distances measured via the 21 cm line.

Not the answer you're looking for? Browse other questions tagged observational-astronomy distances radio-astronomy spectroscopy redshift .

1
Which 16 antenna locations were used this MeerKAT radio image?
8
How exactly will DESI simultaneously capture individual spectra from 5,000 galaxies using optical fibers?
13
What will it finally take to accurately measure the distance to Betelgeuse?
4
How often are radio telescopes used to measure parallax? When was this first done?
4
What does "unremarkable transverse peculiar velocity" mean exactly, and how is it calculated here?
4
What instruments are used to measure the distance to the Sun?
1
Is a black hole found in the centre of the low-surface-brightness and dark-matter-free galaxy AGC 114905