Why does the Fourier transform of this CMB image have a hole in it?

The BBC's Desert telescope takes aim at ageing our Universe contains the image below of the Cosmic Microwave Background from the Atacama Cosmology Telescope or ACT. It looks like this is plotted with a diverging colormap which makes sense since they've likely subtracted off the average temperature and probably at least its dipole component if not more (CMBR dipole anisotropy (ℓ = 1)

But looking at it closely, I thought I noticed a strange regularity to the spatial scale, so I downloaded it and imported into Python and took the Fourier transform to see what I'd find.

Despite this being an ugly and very unscientific analysis, I'm still seeing both a sharp cutoff below a spatial frequency of 1.0 inverse degrees, and "ringing" or $J_1$ Bessel-like ripples at higher frequencies.

Are either or both of these profound and important to the analysis, or an instrumental artifact, or something else?

Image in the BBC news item is a JPEG and you can see the subfield discontinuities (part of the way the JPEG wavelets are implemented) once the the thee RGB color channels are separated, but this is a square grid and not related to the clearly circular patterns in the Fourier transform. 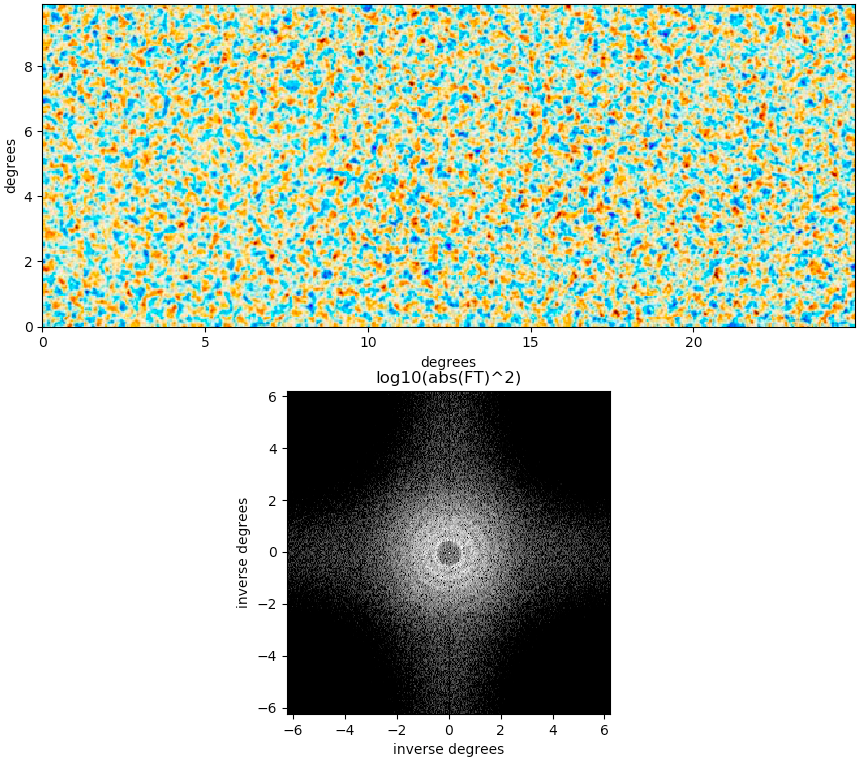 Having now looked at the paper by Aiola et al. (2020), it emerges that for that map, they filtered the data to exclude low frequency multipoles with $|l|<150$, corresponding to about 1 degree. This filtering was done to all the maps in the paper and will be responsible for the dramatic "hole" in your Fourier transform.

As for the high frequency rings, well they might correspond to high $l$ peaks in the angular power spectrum of the CMB, but other things to consider:

I don't know if the image has already gone through some deconvolution process. If not, then your CMB signature will also be multiplied by the FT of the angular response function of the telescopes (probably a Bessel-like function with some high frequency features).

The finite size of the map will introduce apodisation effects, whereby your Fourier transform is the convolution of the CMB transform with the FT of the apodisation function (a narrow 2D ${\rm sinc}$ function.

You also have the pixel size to worry about. Pixelation will be convolution of the true signal with a square top hat kernel. This will also introduce a multiplicative function in to the net Fourier transform of the FT of the pixel kernel (i.e. multiplying by a broad 2D ${\rm sinc}$ function). I think I see this as a cross-shaped pattern on the image.

For that specific E-mode map we have applied a Wiener filter to highlight the high SN modes (those "rings").

In Aiola et al. (2020) the maps shown are made by applying the kx and k filter, but we do not apply any Wiener filter (again the filtering is done for visualization purposes).

The original raw maps used for the analysis are available here: https://lambda.gsfc.nasa.gov/product/act/actpol_prod_table.cfm

As amaurea points out, that is a E-mode map and not a temperature map.

2
Why does the neutral hydrogen velocity have this characteristic behavior in the galactic plane?
14
How long after the Big Bang would CMB radiation have been between 273 and 373 K?
7
Why can we still 'see' the CMB
3
Why the chosen orientation for the M87 black hole image?
1
Why is the peak value(s) of the spectral radiance of the CMB different if you calculate with freq. instead of wavelength?
5
Why does the background noise in this image of 2020 QG look like corduroy?
5
If the visibility function is the Fourier transform of the sky brightness distribution, why do you need the dirty beam and dirty image to find it?
2
How does this Toomre GI criteria have the period in the denominator?
2
Does the Cosmic microwave background (CMB) have an amplitude? Does it vary, like the 'temperature' (wavel./freq.) and the polarization?