What could be the cause of solar "campfires"? 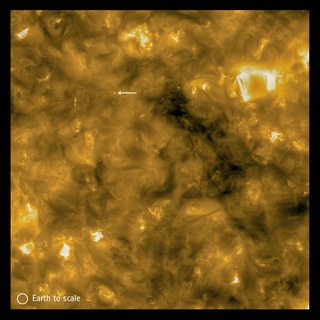 A high-resolution image from the Extreme Ultraviolet Imager (EUI) on ESA’s Solar Orbiter spacecraft, taken with the HRIEUV telescope on 30 May 2020. The circle in the lower left corner indicates the size of Earth for scale. The arrow points to one of the ubiquitous features of the solar surface, called ‘campfires’ and revealed for the first time by these images. © Solar Orbiter/EUI Team/ESA & NASA; CSL, IAS, MPS, PMOD/WRC, ROB, UCL/MSSL

The scientists do not know yet whether the campfires are just tiny versions of big flares, or whether they are driven by different mechanisms. There are, however, already theories that these miniature flares could be contributing to one of the most mysterious phenomena on the Sun, the coronal heating.

It’s not yet clear what these campfires are or how they correspond to solar brightenings observed by other spacecraft. But it’s possible they are mini-explosions known as nanoflares – tiny but ubiquitous sparks theorized to help heat the Sun's outer atmosphere, or corona, to its temperature 300 times hotter than the solar surface.

When all we have is a hammer, sometimes we run the risk of thinking everything is a nail - and sometimes that naivety can lead to new discoveries in lieu of better explanations/theories.

In terms of surface activity of the Sun, if solarspots, Ellerman Bombs, solar flares and coronal mass ejections are examples of nails, then magnetic reconnection is the hammer since it can seemingly explain all these phenomena. Only time will reveal to us how many more phenomena can be explained in this paradigm.

As my answers about the Wilson Effect and Ellerman Bombs discuss, magnetic reconnection is the current paradigm for understanding solar-surface events, and it "refers to the breaking and reconnecting of oppositely directed magnetic field lines in a plasma. In the process, magnetic field energy is converted to plasma kinetic and thermal energy."

Now regarding these relatively newly discovered solar "campfires", as the articles you quote from a year ago state, explaining them is quite uncertain. After the ESA's Solar Orbiter discovered them, they've since seen over 1,500 total campfires on the Sun. These weak events seem to actually be the most abundant and frequent on the Sun's surface compared to other types of events, which suggests that collectively they may help support (and may be a dominant contribution to) the very high temperature of the corona, which is known to be hotter than the underlying solar surface by a factor of ~$10^2-10^3$.

Recent MHD simulations of these "nanoflares" by teams from the ESA show that they can be generated from magnetic reconnection. Here is the A&A article they published (yay no pay wall), in which the introduction is very nice at explaining the state of the field.

An early result of the ESA group's simulations is that it generated brightenings on the scale of what you'd expect for the campfires via a process called "component reconnection," which is a special case of magnetic reconnection. They explain:

Their model shows that:

"... the energy released from the [campfires] through component reconnection could be enough to maintain the temperature of the solar corona predicted from observations..."

The quotes I've added above are from the popular article, but the published A&A article has much more details. They compared the results of their MHD model with 7 summarized facts of observed solar campfires, and they found good agreement. They concluded that "We do not find obvious signatures of flux emergence or cancellation in the photosphere in any cases. Still, in our model we find that these transient brightenings might supply a sufficient amount of energy to heat the corona."

They suspect that the campfires likely emerge as features of coronal loops that are roughly constant in height, as shown in the diagram of their figure 6 which I've pasted here: 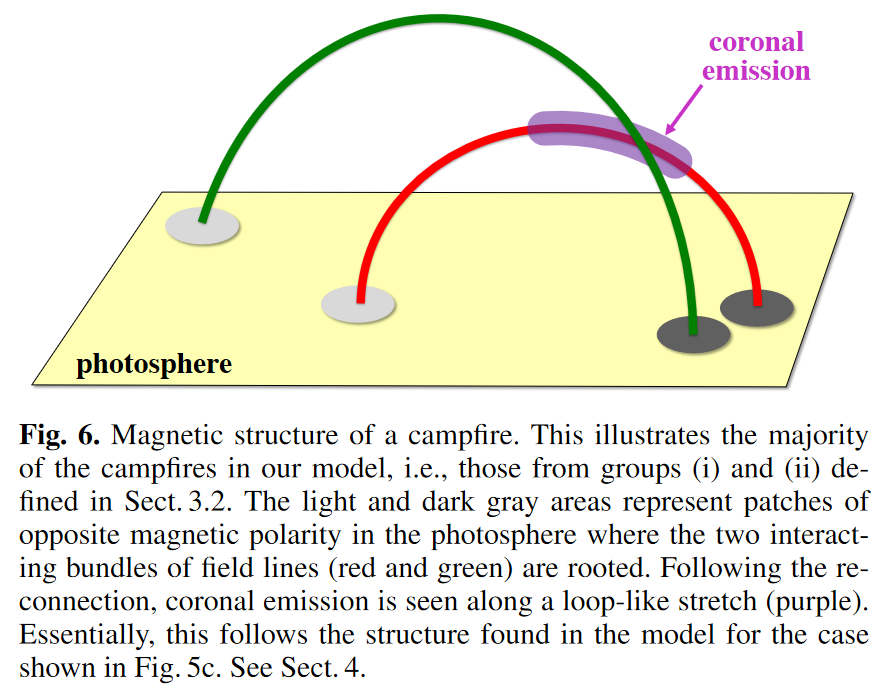 Magnetic reconnection is a well tested paradigm, and its usefulness for explaining the Sun's activities seems to not be finished yet. But only further observations will decide that!

The ESA's Solar Orbiter should begin taking measurements again by November of this year. So more to come hopefully!

Not the answer you're looking for? Browse other questions tagged the-sun solar-flare or ask your own question.

5
Why didn't we see those campfires on the Sun until now?
8
Wilson effect: How "deep" are sunspots?
3
The sun "burns" hydrogen and even has "campfires" on it, but has anyone calculated a rate of actual chemical burning on the Sun?
2
What are Ellerman bombs and how can we identify them?

16
What is the largest recorded solar flare?
5
Spectra of electromagnetic radiation emitted during solar flare
6
What triggers solar flares?
2
How bad could we reasonably expect a solar flare to impact earth, and what can be done to mitigate the impact?
2
Can hot Jupiters cause solar flares?
2
Is it fair to describe a solar flare as a big lightning strike on the sun?
4
What online tools are available to investigate and classify solar eruptions?
4
What would be the effect of a large solar flare on motor vehicles?