Do Enceladus' geysers fall back to its surface or do they achieve escape velocity?

Enceladus, a moon of Saturn, has a very low surface gravity at 0.114 m/s² or 0.012 g. It has a subsurface ocean of liquid water and is ejecting plumes of it. Does the ejected water eventually fall/rain down to the surface or does it (or some of it) achieve escape velocity due to Enceladus' very low mass and gravity? If so, is Enceladus losing mass and will eventually run out of water? 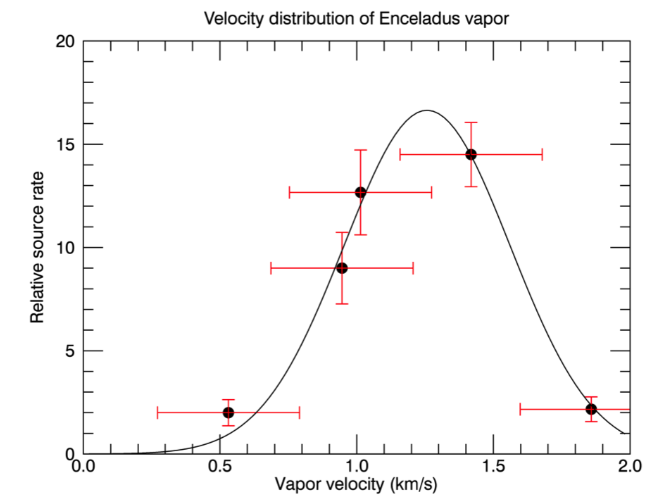 The above graph is just for the high velocity plumes as described in the paper:

The H2O neutrals measured during E8 had a Mach-4 distribution centered on 1.2 km/s with a width of ±300 m/s, which corresponds to a temperature of 65K

The expression assumes radial expansion of the gas from the surface sources at constant speed, neglecting gravity since the mean molecular speed in the jets significantly exceeds (by at least a factor two) the 240 m/s Enceladus escape speed.

Enceladus is losing mass through it's (mostly water) jets. I couldn't find a conclusive analysis of mass loss rate. Eventually I would expect that enough water will be lost that the current mechanism for creating the jets under the 10 km ice crust will no longer be in effect, but this is just my intuition. I don't have a credible source or calculation to back this up.

Not the answer you're looking for? Browse other questions tagged escape-velocity enceladus geysers or ask your own question.

5
How can "Geysers" on Europa reach heights of 100km?
3
Enceladus; why use the words "geysers", "jets", and "plumes" interchangeably?
5
Is there an established distinction between a geyser and a cryovolcano in solar system bodies?

3
Enceladus; why use the words "geysers", "jets", and "plumes" interchangeably?
6
Can a habitable planet be smaller than 0.58 Earth radii?
1
What is the maximum speed in which a human jumping away from Deimos and towards Mars would actually fall back down rather than enter Mars' gravity?