How does Io's atmosphere behave locally near volcanic plumes?

Io's surface air pressure is about $0.3 {\rm mPa}$ but Io's atmosphere is strongly variable, depending on whether it's on the near side or far side of Io (relative to Jupiter) and it collapses at night. When it's heated up, it rises again, and so it also gets thicker in Io's volcanic plumes.

I'd like to know just what does happen with the atmosphere above a volcanic crater during an eruption? How much thicker does it get?

My impression is that for answering your question, one would actually have to run simulations, ideally so-called global circulation models (GCM). If this is for a research project, the MIT GCM would be a good candidate to set up for the atmosphere of Io. Of course, there are research groups working on that issue, e.g. the team of Prof. Goldstein at the University of Texas in Austin, and probably some more.

If you think this is like using a sledgehammer to crack a nut, you could also think about local plume modeling, I found a paper entitled A new strategy for the estimation of plume height from clast dispersal in various atmospheric and eruptive conditions which seems to come along with Matlab code:

Highlights [of the quoted paper]

Being a bit familiar with the Rossi et al. (2019) plume model, I don't think it can apply here: it needs isopleth data as input, i.e., it needs maximum grain-size data from multiple locations in the field... (It is generally used to infer maximum plume height of past eruptions for which we don't have direct plume observations/measurements, but only tephra deposits.) Also, the model is parametrized for the Earth: things like particle density, tropopause height, etc., which are all different on Io

Last but not least, I would aim for some back-of-the-envelope estimates. For such a Fermi estimate we have to make some assumptions about the plume dynamics, and we also need some numbers. For that purpose, I found an Wired article by Erik Klemetti: Just How Hot is Io's Volcanic Surface? which might help us to estimate the state of the atmosphere, given by $T$, $p$, and humidity on Earth and probably ${\rm SO_2}$-content on Io.

Up to now I sketched 3 approaches to solve the problem in prinicple, without giving an answer. That's why I want to close my post by quoting the above mentioned Computational Fluid Physics Laboratory from U Texas which shows the result of their simulations. 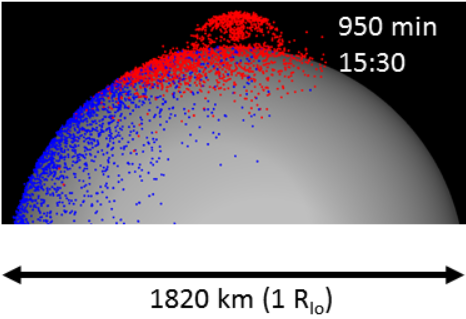 For me it looks like the plume material shoots out of the atmosphere (and probably carying along parts of the atmosphere with it), before slowly setteling down on Io's surface. The plume height in the above picture is about ${145 \rm km}$, other websites report plumes of ${300 \rm km}$ height. It is a global phenomena which influences the overall atmosphere, probably causing wave-pattern all over the moon's atmosphere.

If the predominately ${\rm SO_2}$ atmosphere is in vapor pressure equilibrium with the large reservoir ${\rm SO_2}$ ice that covers much of Io's surface, as Io enters eclipse and is no longer heated by the Sun, the decreasing surface temperatures will cause the primary atmosphere to collapse out onto the surface [Saur and Strobel, 2004]. The atmosphere, with a scale height of 10 km, would transition from a collisionally thick atmosphere, with a mean free path (l) = 1 m, to an exospheric atmosphere (l ~100 km). Conversely, if the atmosphere remains constant during eclipse, it would point to a volcanically supported atmosphere.

Not the answer you're looking for? Browse other questions tagged planetary-atmosphere temperature volcanism io or ask your own question.

3
Is or might there be lightning on Io?
1
Characteristics of Venus' jet streams?