Basic explanation of baryon acoustic oscillations; what if anything is actually oscillating?

The team’s results will be published in a series of 20 papers in the Monthly Notices of the Royal Astronomical Society.

After 01:30 in the second video Jiamin Hou from the Max Planck Institute for Extraterrestrial Physics says:

However the red shift has an additional component that is due to the galaxy’s own velocity, and which moves in response to the gravitational attraction of the surrounding matter, and these two components can not be separated from each other. But the statistical analysis of the eBOSS allows us to distinguish the effects of velocity from that of expansion.

but I can't get a grasp of what the term "baryon acoustic oscillations" really means.

Question: Is it possible to write or quote a basic explanation of what these are? For example, does oscillation mean there are things moving back and forth due to some restoring force? Is there something analogous to a "sound wave" out there somewhere? Or is there just a plot of something that shows a wiggly line that goes up and down?

tl;dr nothing is oscillating now, but it was in the early universe. Now we just see the frozen relics

This is just an attempt at a simplified explanation of the Wikipedia article linked in the question.

There were pressure waves in the very early universe. They came from a balance of gravity and radiation pressure (the matter at the time was hot enough to be opaque). Whereever there happened to be a locally higher density (of matter, radiation and dark matter) the excess pressure would cause an expansion and then gravity would cause a contraction sending waves out at (according to the article) half the speed of light.

As the universe expanded and cooled, matter eventually became transparent (it was hydrogen and helium gas) letting the radiation pressure escape and leaving higher densities both in the location of the original concentration and at the crest of the wave a certain distance away (but the same certain distance for the first waves from each concentration). Those high densities are where the galaxies formed, so what we look for today is an excess of galaxies at a specific separation and that's what we see.

Consider a spherical cloud of gas with density $\rho$ and radius $R$. If there were no pressure, the sphere would collapse in the time scale of the free fall time $$t_{ff} = \sqrt{\frac{3\pi}{32G\rho}}$$

If there is pressure instead, when the cloud starts to compress, pressure will try to oppose gravity and restore the previous size of the cloud. But pressure doesn't act instantaneously, pressure changes propagate at the speed of sound $c_s$. The time it takes for the pressure to react is therefore

It is useful to define the Jeans length $\lambda_J$ or $R_J$ that is the maximum size a given cloud can have before being doomed to collapse and is found by equating $t_p$ and $t_{ff}$.

Different components of the universe

In the early universe the main components to the total matter-energy density where:

A brief history of the formation of structures in the universe

The initial density fluctuations were given (possibly?) by inflation. After inflation, dark matter started collapsing, forming gravitational wells, which later will be fundamental for the formation of galaxies. Baryonic matter instead is coupled with radiation and can only oscillate with very fast and large sound waves.

After the age of decoupling (z=1100) the oscillations freeze. The barions are free to start forming structures and galaxies, but there is so little time! It can be shown that if there were only baryons, the density fluctuation could grow only by a factor of $\approx 1000$ from the age of decoupling to today. This isn't enough to explain the extreme density differences we observe today: a galaxy is much more dense than the surrounding space.

Luckily there is dark matter, which has already formed the convenient potential wells. Baryonic matter just needs to fall into the wells and form galaxies, stars, planets...

In particular, we may want to look at the two point correlation function of the spatial distribution of galaxies $\xi(r,r')$. Given that there is a galaxy at the position $r$, $\xi(r,r')$ gives the probability that you will find another galaxy at the position $r'$. The Fourier transform of $\xi$ gives the power spectral density $P(k)$. It can be calculated theoretically. Using our best fit cosmological parameters $P(k)$ is the following 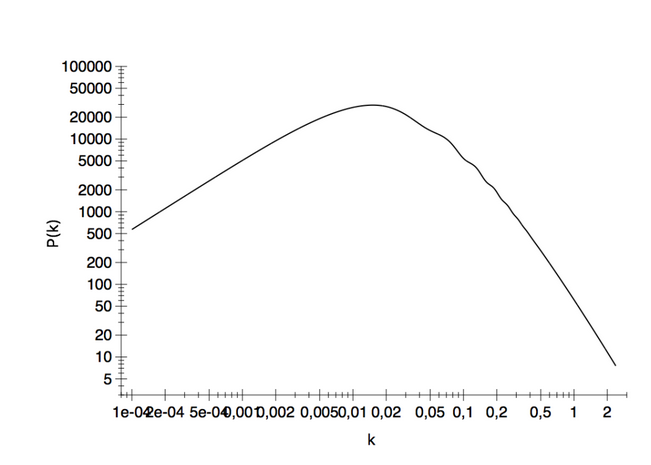 This plot is obtained from CAMB web interface, a website were you can choose the cosmological parameters and after a few seconds it calculates the power spectral density, along with the CMB spectrum and other cosmological observables.

The plank satellite has measured the power spectral density and this is the result. 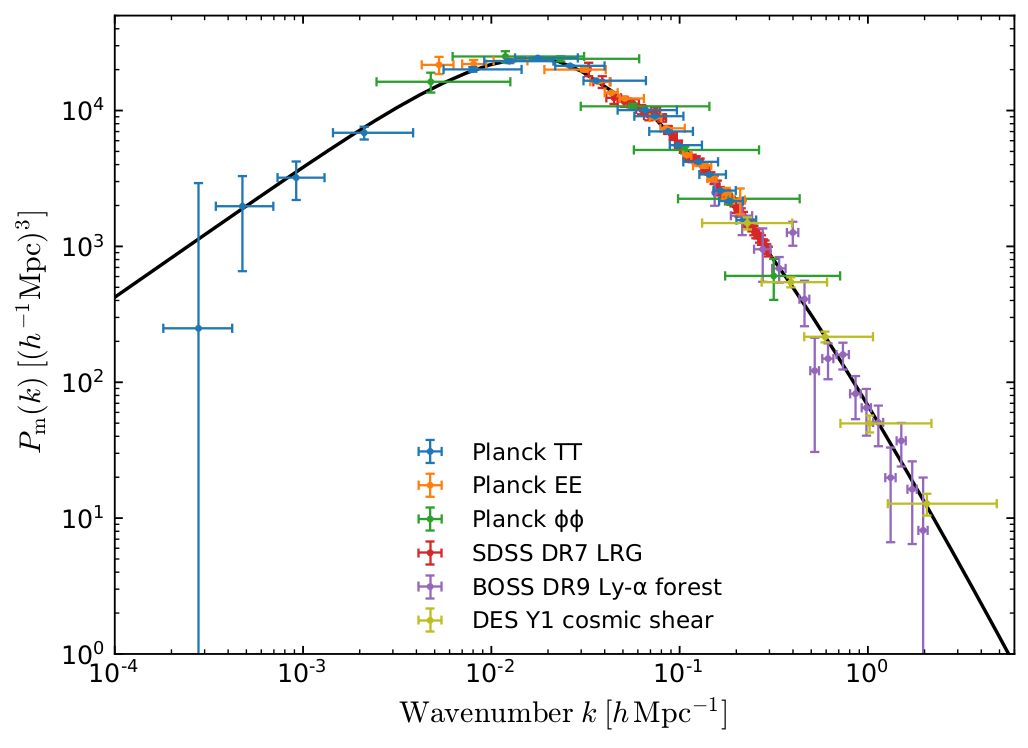 Not the answer you're looking for? Browse other questions tagged observational-astronomy cosmology sky-survey sound .

4
what is the current explanation for the formation of cosmic voids?
5
What actually determines the angular uncertainty of the source of a detected gravitational wave?
2
How is the expansion rate of the universe obtained from Baryon Acoustic Oscillations?
0
What else can we learn from a Foucault pendulum? Have they ever been used to determine anything more than that the Earth rotates on its axis?