How do astronomers detect the 'metals' in a star? If the atoms are presumably completely ionized?

Atoms and molecules usually emit their characteristic wavelengths because of the electrons' energy levels....

If so, at what type of wavelength? Mostly visible, IR and UV like the rest of the star?

You are correct that the characteristic emission and absorption lines we see in stars' spectra are from electrons that are bound to atoms making transitions between different energy levels. That is possible because the elements in a star's photosphere are not fully ionized. Hydrogen - the easiest element to fully ionize because its nucleus only has a charge of +1 - is pretty highly ionized in the hottest stars (O stars), which is why those stars have weak hydrogen lines in their spectra.

Completely ionized atoms (bare nuclei) do not absorb or emit electromagnetic radiation in the parts of the spectrum where stars emit most of their light. They can absorb very high energy photons (gamma rays with energies of millions of electron volts) that have enough energy to excite their nuclear energy levels, but the photospheres of stars aren't hot enough to emit this kind of radiation (and as previously stated, the atoms there aren't fully ionized anyway).

Many stars have elements in their photospheres that are partially ionized, but the spectral lines we see from those atoms are still from the remaining bound electrons. For example, Ca II (singly-ionized calcium, with 19 electrons instead of 20) has strong lines in the violet part of the spectrum of the Sun.

As @ELNJ answer pointed out, fully ionized the atoms at the star surface are not. It is not hot enough. Star cores are another case, but we usually don't see them. There, both pressure and temperature make impossible the existence of the usual atoms.

Atoms and molecules usually emit their characteristic wavelengths because of the electrons' energy levels...

Yes, they do. They also absorb their characteristic wavelengths, given chance.

In stars, most spectral lines we see are absorbtion - a characteristic wavelength missing (or weakened) on a background of more or less flat area. Stars with strong emission lines are rare.

Do the completely ionized ('naked') nuclei absorb and/or emit EM radiation? If so, at what type of wavelength? Mostly visible, IR and UV like the rest of the star?

They do. They (mostly electrons, nuclei are neglected in simple calculations) scatter photons, so they emit a thermal radiation. This is the flat-ish thermal background where we see the absorbtion lines overlayed.

Nuclei have their own excited levels w/ characteristic lines in the gamma-ray spectrum, but it is not hot enough at the star surface to excite these.

Here you have an enlarged visible spectrum of the Sun: (credit https://scied.ucar.edu/image/sun-spectrum )

Each of these black lines can be traced to some chemical element in some ionization state. 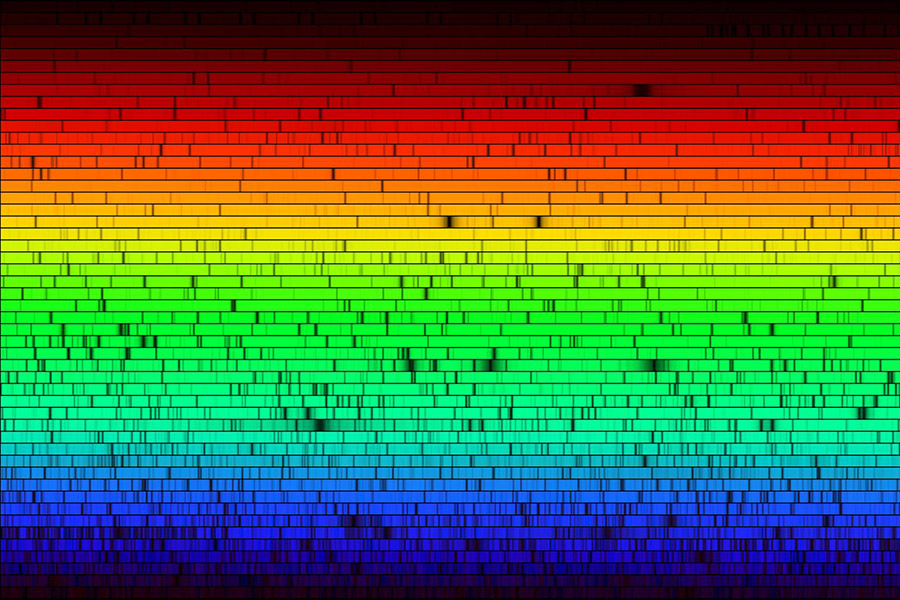 Not the answer you're looking for? Browse other questions tagged observational-astronomy spectroscopy metal or ask your own question.

4
Colossus telescope, trying to outsmart aliens?
8
How do astronomers find interesting events?
1
Where/how are metals distributed in our universe?
6
What are the most valuable meteorites and asteroids in terms of precious metals?
0
How do astronomers distinguish the spectral lines?
2
Can some stars not emit any energy in the visible spectrum?
4
Solar visible light spectrum
4
How do observational astronomers manage streaks and other artifacts from objects in Earth Orbit?
3
Which kinds of astronomical observations most need to avoid the Moon being up?
1
Do free protons and neutrons absorb much radiation? To affect astronomers' observations? If so, at what wavelength(s)?