How fast is Neptune getting brighter? When was was this first noticed and reported?

This answer to Compute Planet's Apparent Visual Magnitude reports the new work on planetary magnitudes, and contains an intriguing blurb about Neptune:

So I'd like to ask: How fast is Neptune getting brighter? When was was this first noticed and reported?

TL;DR: There was apparent 11% increase of Neptune brightness during 1980 and 2000. This could be due to multiple reasons. Recent observation suggested the reason to be change in the amount and brightness of the banded cloud mostly in the planet's southern hemisphere due to seasonal variations and thus affect overall brightness of the planet.

Neptune's visual magnitude stayed relatively constant before 1980 and after 2000, but during this period, there was an unexpected rise in the brightness, about 11%. Astronomers have proposed various ideas to explain this peculiar variation but none are convincing. But the more promising explanation would likely to be seasonal change due to tilt and cloud formation variation. 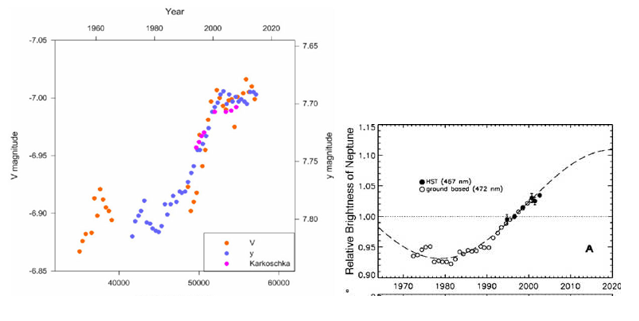 A team from Wisconsin made three sets of observations of the full rotation of the planet in 1996, 1998, and 2002. The images showed progressively brighter bands of clouds encircling the planet's southern hemisphere. The findings were consistent with observations made by G.W. Lockwood at the Lowell Observatory, which show that Neptune has been gradually getting brighter since 1980. They believe that cloud bands are getting brighter because the Sun is warming the atmosphere in the south apparently changing the brighness of Neptune. 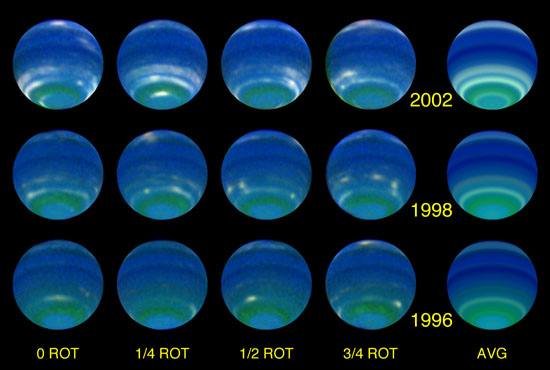 Neptune's near-infrared brightness is much more sensitive to high altitude clouds than its visible brightness. The recent trend of increasing cloud activity on Neptune has been qualitatively confirmed at near-infrared wavelengths with Keck Telescope observations from July 2000 to June 2001 by H. Hammel and co-workers which could provide an explanation to this brightness change.

Tilt could also be a reason. Hubble images reveal a real increase in Neptune's cloud cover consistent with seasonal change is the apparent absence of change in the planet's low latitudes near its equator. This do has a reason. Since Neptune is inclined at a 29-degree angle, the amount of solar energy received determines the season and this seasonal variation might affect the brightness. When the Sun deposits heat energy into the atmosphere, it forces a response like heating the atmosphere that lead to constant moving and condensing of cloud cover.

Another reason could be internal heat source of Neptune which may contribute to the planet's apparent seasonal variations and ultimately affect the planetary brightness.

Current visual magnitude of Neptune is 7.88 but it could reach 8.0 in the near future.

For more information, refer to this paper, "The Secular and Rotational Brightness Variations of Neptune"

This is an incomplete answer—a placeholder for a more complete answer that I'm adding here at the request of the OP (who, I will say, has been very patient with me!).

Although the precise reasons aren't well understood, I don't think people find the observed brightening of Neptune to be especially anomalous. We have accurate photometry for Neptune for only about 60 years or so, I think, so it's quite plausible that the variation is seasonal (Neptune's orbit is 165 years). Keep in mind also that the brightening is fairly subtle by ordinary standards, maybe a couple of tenths of a magnitude (about 15 percent brighter than before 1980).

One source is Schmude et al. "The Secular and Rotational Brightness Variations of Neptune"; its first paragraph states that the brightness has increased 10 percent in "the past several decades."

Not the answer you're looking for? Browse other questions tagged observational-astronomy photometry neptune planetary-science or ask your own question.

12
Could Neptune be viewed with the naked eye from Uranus?
11
Compute Planet's Apparent Visual Magnitude

11
How was Earth's "quasi-satellite" 2016 HO3 "first spotted" and it's orbit determined?
2
When and where are Pluto and Neptune closest to each other?
5
How bright is the Crab Pulsar's 30 Hz modulation in visible light? What color is it?
11
Was the "green star" event in NGC 3314 ever figured out or named?
20
When was the martian dichotomy first observed?
4
How often are radio telescopes used to measure parallax? When was this first done?
2
When was the diameter of Titan first measured?
34
Can Pluto be seen with the naked eye from Neptune when Pluto and Neptune are closest?
5
How long does lunar opposition surge last? Are there measurements of the full Moon getting suddenly brighter?
7
When was H-alpha first used to observe the universe?