Was this an astronomical phenomenon observed in 1689?

This was 18 December 1689 (according to the Gregorian calendar – actual date given in the document is Julian 8 December).

It was "around 4 in the afternoon, around sunset". (I think that sunset actually was at about 3:15 PM local time.)

It is described as an elongated cross with the long arm being about 6 times as long as the short arm. I think it means to say that the long arm was vertical, but I'm not sure about that. The cross was shining clearly on the sky, a burning light in the north-east for about an hour. It was almost a clear sky and where the cross was there were no clouds at all.

The account is accompanied by this illustration. It doesn't have the same proportions as I understand the text to say. Maybe the image is better than the text. 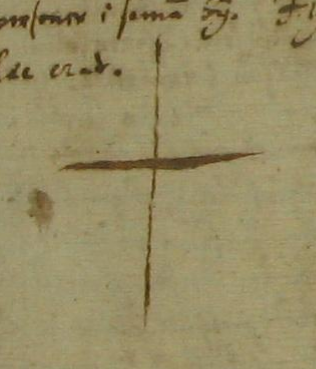 (Undoubtely this led to religious ponderings, and that was presumably why this was recorded, but there is actually nothing of that in the note – just this description.)

Was there anything special happening in the sky then that could have to do with this?

This is a really interesting question! One thing to note is that since it appeared in the northeast at sunset, it is nowhere near the sun - in fact, it is pretty much in the opposite direction as the setting sun. In the winter in the north, the sun would set in the southwest. And regarding your comment about the text describing the event as "around sunset" when it would have been 45 minutes later, I think that's not surprising - at northern latitudes in the winter, around the winter solstice, the path of the sun is at a very oblique angle to the horizon, so twilight lasts quite a long time. So it could easily feel like "sunset" for an hour or more. Though the sun set at 3:15 PM as you note, at 4:00 PM the sun would still only be 5.3 degrees below the horizon, so civil twilight had not yet ended. Plus, no one in those days was wearing a wristwatch, so a given observer's estimate of time of a particular event may have been less precise than we would be accustomed to now.

So, my best guess is that this might have been related to anticrepuscular rays. Pros and cons for this hypothesis:

Another thought I had, which looks very similar in appearance, but is in completely the wrong direction, is a sun pillar, combined with a stratus cloud, like this (from here): 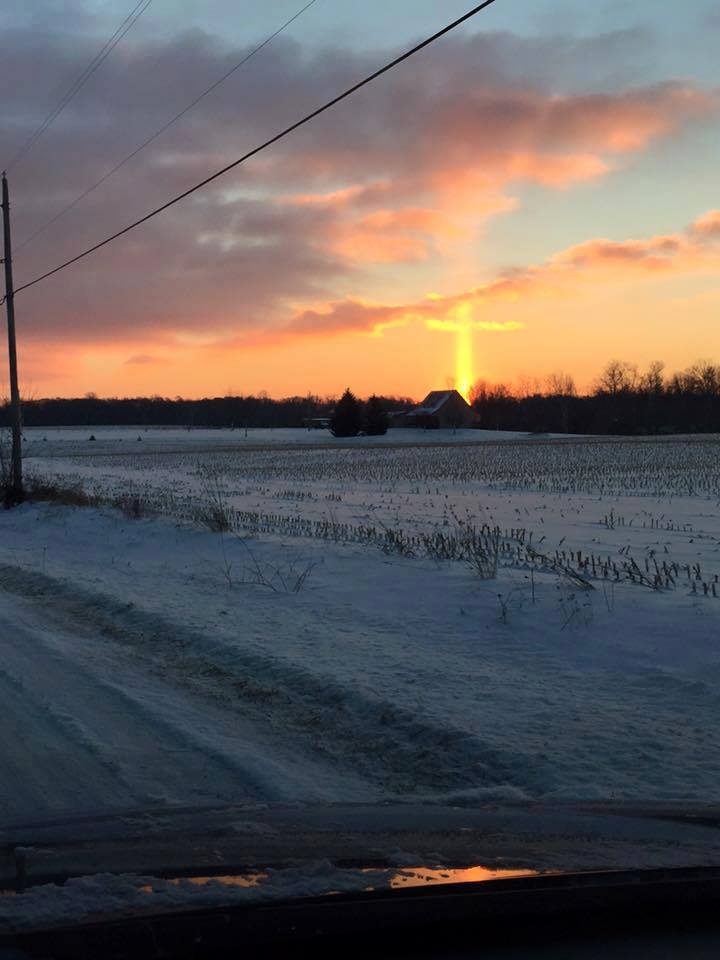 I also thought of the moon, and whether that could give something similar, e.g. if it was just below the horizon. But that doesn't quite work, either. I did some calculations, and the moon was 38% full that day (waxing crescent, one day short of first quarter). At 4:00 PM (assuming that the location is UTC+1 hour), the moon would have been 23 degrees above the horizon, at an azimuth of 161 degrees, i.e. low in the south-southeast. So that doesn't seem like it would contribute much to something in the northeast.

So clearly I don't have a definitive answer, but maybe something here will be helpful or give others some ideas.

That is hard tell; from your description it reads like a spectacular halo phenomenon.

They are more common when the sun is still up in the sky, but even after sunset many are possible and they can combine. With the right atmospheric conditions they can be very impressive experiences.

See for instance this somewhat cross-shaped halo at sunset. Two of the most common phenomena are the light pillar which is especially impressive near dusk and dawn and several circular halos - which can combine to a cross-shape when near horizon. Add in sun dogs which add bright spots 60° or even 120° from the sun's current position, this might explain bright(er) light in the North-East. Here is a schematic overview (German) over many halo types

See also this wikipedia article which reports a painting of a particular impressive scene which was interpreted as sign of heavens. Combinations with sun pillars also give cross - like sights in the right circumstances, e. g. https://www.pinterest.de/pin/757871443529277426/ or here http://old.meteoros.de/arten/ee08e.htm

Not the answer you're looking for? Browse other questions tagged amateur-observing .

6
Pictures of a curious astronomical phenomenon
2
What would this moving point of light be?
2
Actual meteor sightings formula
3
Where should I be looking to see Neowise in southern Sweden?
6
Is the Object in this Photo Mars?