What is meant by "vastness of space, which now filled a volume of a hundred million light years"?

I am reading the book Cosmic biology: How life could evolve on other worlds (citation below) and do not understand the meaning of the following paragraph from page 4 (emphasis mine):

It took 200,000 years or more for the universe to cool to 2700 °C, a temperature at which the protons and neutron-proton aggregates could start capturing the free flying electrons to form the first atoms of hydrogen and helium. As the dense fog of electrons condensed into newly formed atoms, the opaqueness cleared and photons could stream without interruption across the vastness of space, which now filled a volume of a hundred million light years.

I am under the assumption that a light-year is a unit of measurement for distance and spatial volume is expressed as though it fills a cube (e.g., 100 ly^3). Even if this practice of denoting volume was unintentionally omitted, the claim does not satisfy my attempt to calculate the spherical volume:

This result is much larger than "[one] hundred million light years."

Am I misreading this paragraph?

I think this is at best a weird typo, but more likely a confusion by the authors (who are not cosmologists or astronomers, but a biologist and a geologist).

The book is 10 years old, but our view of the timeline of the evolution of the Universe was pretty much the same then. Note that the calculation of the size of the Universe as a function of time is a bit more complicated than you assert, because it expands while photons are traveling.

The process the authors discuss is known as the recombination of hydrogen, followed by the decoupling of light from the gas. At an age of $200\,000\,\mathrm{yr}$, the Universe had cooled to $4\,500\,\mathrm{K}$, and atoms began to recombine. At this point, the region that is the observable Universe today had a radius of almost 30 Mlyr, i.e. a volume of some $10^5\,\mathrm{Mlyr}^3$. However, the observable Universe at that time was much smaller, because light hadn't traveled so far — the radius was less than half a Mlyr.

The diameter of the Universe reached 100 Myr much later

Summary in a figure

The figure below shows how the progression of recombination, from ~100% ionized gas when the Universe was around $200\,000\,\mathrm{yr}$, to ~100% neutral gas when it was $\sim 400\,000\,\mathrm{yr}$. I calculated this by solving the Saha equation assuming a pure hydrogen gas, i.e. neglecting helium, but this is a minor contribution so I think it should be okay.

Along the line you see corresponding temperatures in red, and ratios between the photon mean free path and Hubble distance (~size of the Universe) in green. When this ratio is of order unity, photons decouple. The secondary $x$ axis show the corresponding redshift. 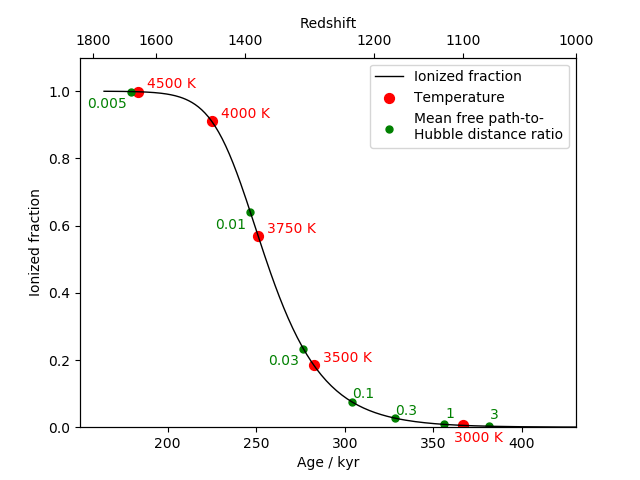 This seems to refer to the diameter of the observable universe at that time. The region of space that is now 93 billion light-years in diameter (in the comoving metric that takes account of the expansion of spacetime) was about 100 million lightyears in diameter at the time when electrons and protons combined to form neutral gas.

The whole universe may well be infinite in extent, at least there is no evidence that it is not.

Your calculation is not relevant. You can't take the time and use it to calculate a volume, and anyway the volume of the observable universe at that time is much greater than a sphere with radius of 200,000 light years since light has had much more travel time since then.

Not the answer you're looking for? Browse other questions tagged big-bang-theory or ask your own question.

23
Do we know the exact spot where big bang took place?

30
Could liquid water have existed in open space 15 million years after the Big Bang?