Determine spectral type of star from its properties

Are there any exact boundaries for Yerkes spectral classification as well? How can I tell if a star is super giant (I), bright giant (II) or giant (III)? And then, how can I tell if it is bright (a), normal (ab) or faint (b)?

There are no exact boundaries in temperature, luminosity, surface gravity etc. for spectral classes because the classification system works in a different way - it is fundamentally an empirical system, with classification based only on the appearance of features in the spectra.

The Yerkes or Morgan-Keenan (MK) system is based only on a set of standard stars and their spectra, and the type of any other given star (that is not one of those standards) is based only on where that star’s spectral lines fit into the two-dimensional matrix of standards. The introduction of this Annual Reviews article by Morgan and Keenan spells out the principle.

Of course those lines reflect physical effects Iike temperature or luminosity (really primarily surface gravity), but those physical properties are not the basis of the classification. And there are other factors that can change the underlying properties while preserving the appearance of the spectral lines. For example in the intro of this paper, Gray discusses how stars of the same luminosity class can have different luminosities due to rotation.

Divorcing the classification from the physical properties is an interesting philosophical approach, but one that has stood the test of time even as our understanding of stars and their physical properties has improved in the past 70 years. If you have time, I encourage you to read the first couple of pages of the review article linked above - the quote from Dimitri Mihalas (who was a leading theorist on stellar atmospheres) is especially interesting, I think.

As noted by the other answers here, the spectral classification is the classification of the object's spectrum, not its physical properties. G5 dwarfs and G5 giants may have somewhat different mean temperatures.

For early-type stars, you run into the problem that luminosity classes are not well-separated, with no particular distinction between luminosity classes III–V for spectral types F and earlier, though supergiants like Rigel seem to be easier to distinguish from the III–V stars.

I've created a merged version of figures 4 and 5 from the paper, which indicates the calibrations (thick lines) for class I (red), II (orange), III (blue), IV (purple) and V (green). The horizontal scale of figure 5 (luminosity class V) is labelled somewhat strangely, so I matched the position of the isochrones (thin red lines in the background). As noted in the paper, there isn't much data for giants (class III) in the middle of the range, which is indicated by the dashed line. 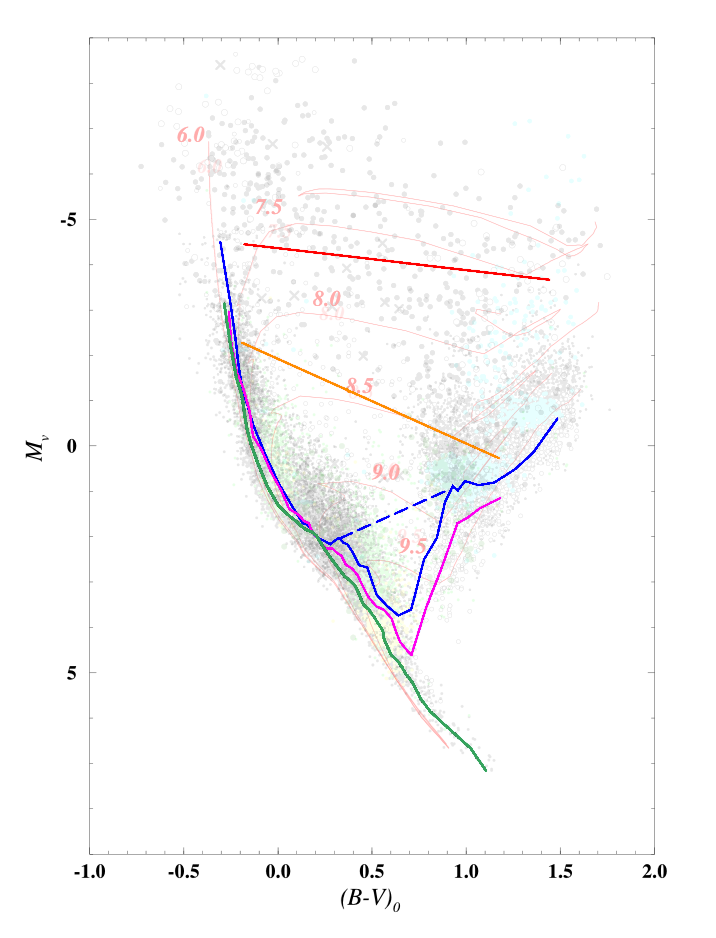 The points in the background (easier to see in the individual figures in the paper) indicate substantial dispersion around the calibrated best fits:

The results obtained show that the relation between absolute magnitude and luminosity class has a large intrinsic dispersion. In some cases the order of the luminosity classes is inversed with respect to the order in absolute magnitude (dwarfs brighter than giants). Similar results were obtained by Jaschek & Gómez (1997) from the analysis of about one hundred early type MK standards with the help of Hipparcos parallaxes. Furthermore, the conclusions do not change whether one separates low and high rotational velocity standards.

Going by eyeball, it looks like you might be able to make a rough estimate of the luminosity class by partitioning into three classes (supergiants, giants, dwarfs), by taking a roughly diagonal cut to partition off the main sequence (dwarfs), then separating the giants from the supergiants at $M_\mathrm{V} \approx -2$.

Presumably Gaia will be useful for an updated calibration, although the latest data release (DR2) does not have particularly reliable temperatures (and those are restricted to the range 3000–10000 K, so does not include the coolest M dwarfs, or objects earlier than spectral type A).

Usually, the spectral classification is done analyzing the spectra of the star, we measure the depths of several key lines and compare them, each spectral type has his own characteristic relative intensities etc. Is not a perfect boundary and some times the stars bounce from type to type depending on who classified it and what data is available (is not the same low-res than high-res spectra) for detailed information check Sota et al. 14 and similar papers.

Not the answer you're looking for? Browse other questions tagged star spectral-type .