What is it about the layout of the three gratings in a Bahtinov mask that makes its indicate focus in this way?

The question Lucky imaging with Celestron 14 - is this result reasonable? includes a beautiful example of a focus test using a Bahtinov mask and the image below from Deep Sky Watch's Home Made Bahtinov Focusing Mask & Templates shows how the middle spike moves left-right with respect to the crossing point of the pair of spikes on either side.

update: This answer to How does a Bahtinov mask work? explains more what happens, but it does not even begin to address Why exactly... 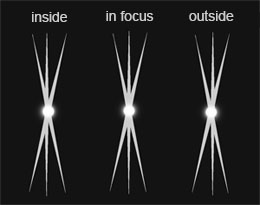 The movement of the diffraction spikes is similar to the phase detection autofocus that's been used in SLR cameras for decades. Before the days of autofocus, many SLR cameras had a split-image viewfinder that used the same principle as well1.

To keep things simple, let's consider a mask with just two slits out at the very edge of the aperture. 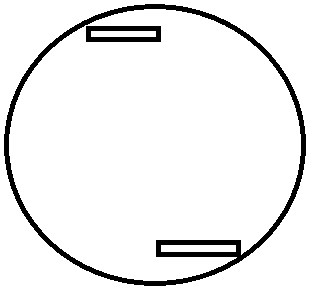 Now let's consider what that does as we're focusing. I'm going to draw things in terms of a refractor, but using a reflector doesn't really change things. So, here's a simplified (and drastically not to scale) diagram of light coming from a star, going through the two slits above, and coming into focus on a plane behind the lens: 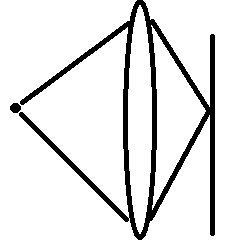 So, we have a star on the left, two rays of light leaving the star and traveling to the two slits, going through the slits, being refracted by the lens, and coming into focus on the plane. The image is in focus when the two rays of light come back together precisely at the surface of that plane. So what we see when we look at this should be basically a single line. We really have two diffraction spikes, one from each slit, but since we've brought it into perfect focus, they'll line up with each other perfectly. So, in simplified (and hand drawn) form, what we see looking at this, is a picture like this: 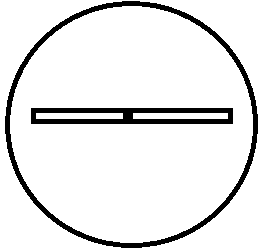 Two diffraction spikes, but they align perfectly with each other. I've drawn a boundary between the two, but in real viewing, there won't be an obvious boundary at the edge of each diffraction spike--we'll just see basically a single line.

So let's consider what happens when we move that plane, so the image is out of focus. The rays of light continue to be refracted to exactly the same degree, so we end up with something like this: 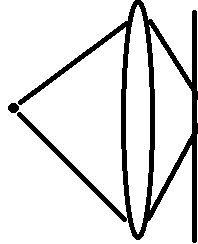 In this case, we can see that the two aren't hitting the focus plane at the same point, so what we'll see will be two mis-aligned diffraction spikes: 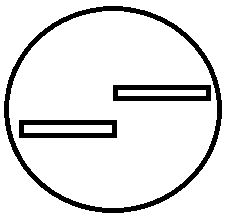 That explains how (some of) the spikes appear to move as we focus. That leaves another obvious question: how do we get the other spikes that don't move as we focus? That's actually pretty simple. If you look back at the first picture above, there's a crucial fact to note. The slits are (at least approximately) tangent to the aperture.

To form the X-shaped diffraction spikes, the Bahtinov mask uses slits that are radial instead. Technically, these do still move (a little) but it involves the diffraction spike moving along its length instead of sideways, so it's much less visible even at best. There's also little or nothing at the end of each diffraction spike, so you don't have much to compare against to see the movement.

Beyond that, it's all "user interface" enhancements to make it easier to use: More slits, carefully aligned with each other, project diffraction spikes on top of each other, so you get what looks like a single diffraction spike that's a lot brighter. The X-shape guides you eye toward the place you should be looking to see whether the spikes are properly aligned, and so on.

Now don't get me wrong: those are important, and definitely part of the genius of the design--but the basic principle of how/why the spikes appear to move relative to each other remains the same (and why some move but others don't appear to).

1. Note that many rangefinder cameras also used split-image focusing, but it worked rather differently--what I'm talking about here is strictly the version used with SLRs. An SLR with a split-image viewfinder used the same principle as shown here. The difference is that instead of using an aperture with slits, it used a pair of prisms at the center of the viewfinder to collect light from near the edges of the lens. But it still used the basic idea of collecting light from two opposite edges of the aperture, and showing them next to each other, and your focusing by aligning the pictures showing from each. It didn't use diffraction spikes, because in normal photography you typically have objects in the picture with obvious lines in them. Diffraction spikes just let us take subject matter that's mostly just dots, and creating lines from them.
Share
Improve this answer
edited Aug 13, 2020 at 17:42
answered Aug 13, 2020 at 15:49

Diagram from the Wikipedia page: 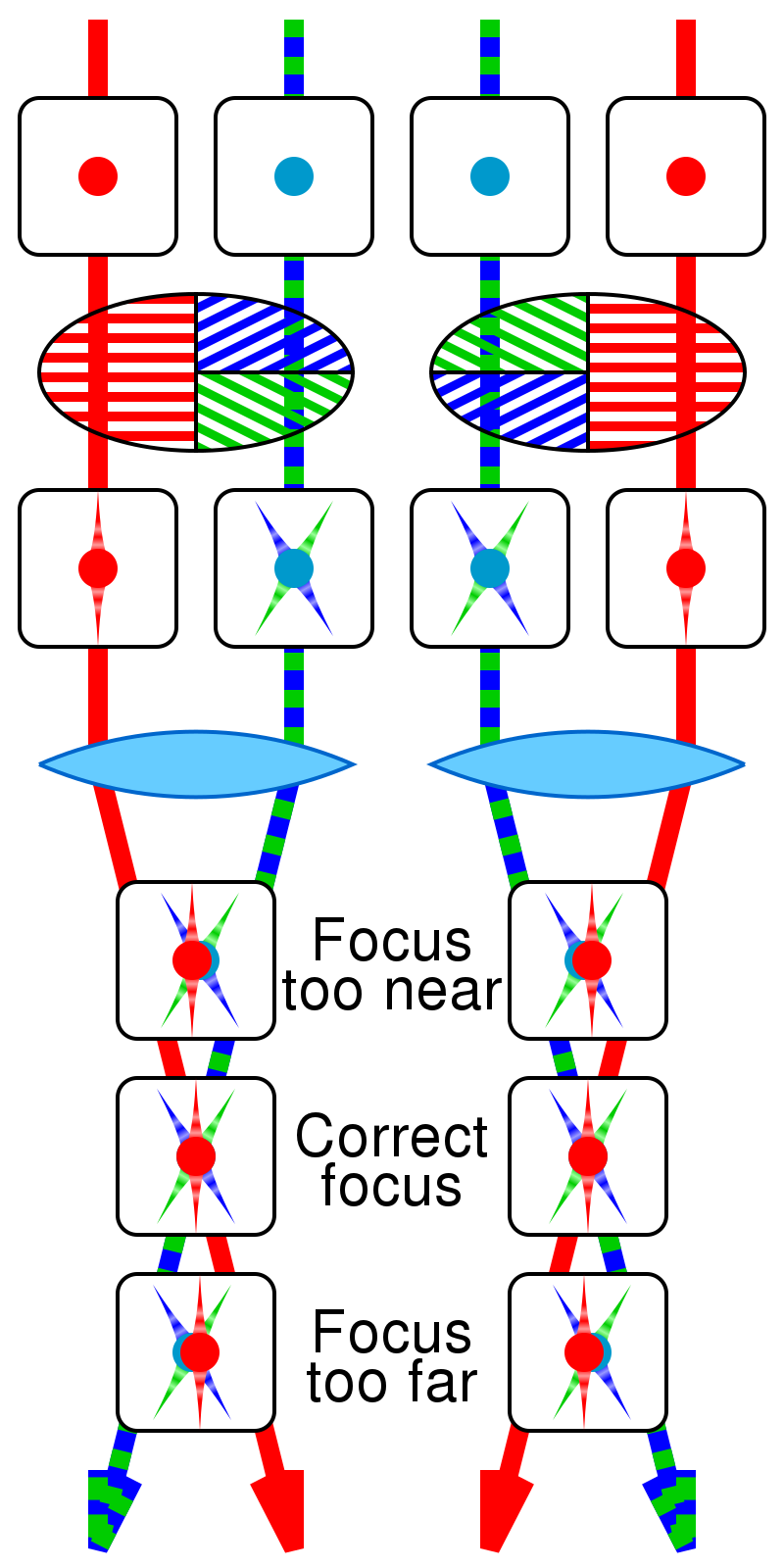 So, in to answer the question of 'why do the spikes move?' - as the distance from the primary element to the mask changes, the place where the rays from the diffraction peaks are intersected changes accordingly.

In theory you could achieve a similar effect with only two sections of slits with different radial alignments, but this would make it more difficult to precisely find the aligned point because it would only produce two spikes.

The working principle is the use of diffraction spikes. An obstruction in the light path like the spider vanes of a reflector tlescope creates a diffraction spike. Mounting a straight edge in front of the telescope does the same (see link below). I am not aware of an article that explains the exact physics, but moving the focus moves the spike over the light source that creates it. So that's the principle.

The Bahtinov mask is made up of three sets of bars, A, B and C. Each set of bars will create a diffraction spike.

The apparently complicated pattern of the mask can now be reduced to the equivalent of a simple 3 vane support.

The angled bars (B and C) produce the angled spikes, and they will move to the left when the focus is racked inwards.

The vertical bars (A) produce the central spike, and this will move to the right.

Perfect focus is then easy to identify because the central spike should bisect the two angled spikes. The human eye is very good at judging when an angle is exactly bisected.

I would like to honour the inventor with linking to their Russian forum post here. And another diffraction based method to achieve focus. Further read on diffraction based focus methods would be the Scheiner disk, Hartmann mask and Carey mask. Also physics stack exchange has questions on Bahtinov and Hartman masks.

Not the answer you're looking for? Browse other questions tagged observational-astronomy telescope amateur-observing optics .

5
How does a Bahtinov mask work?
7
Lucky imaging with Celestron 14 - is this result reasonable?

5
How does a Bahtinov mask work?
4
Under what situations can an aperture mask improve the resolution of a small/medium amateur telescope? Is this demonstrable mathematically?
1
What exactly is a Hamiltonian telescope? Is this one?
0
How to make a 65 cm lens with a 20 cm hole in it for a Hamiltonian telescope?
2
What would "the next GAIA"-like instrument be like? Could it simply be a 3 to 5x scaled-up version of the same beautiful system?
1
When thermal infrared space telescopes spot asteroids, are they seeing the body's own thermal emission, or reflected TIR from the Sun?
11
How exactly did JWST take a "selfie" of its own primary mirror, and what is the real purpose of this capability?