Could there be Earth-like planets in binary or trinary systems?

Could Earth-like (suitable for Human habitation) planets exist in systems with 2 or 3 suns, have any been found?

With more than a single star, isn't it likely that the habitation zone would be too irregular, gravitational forces be irregular/strong and numerous other issues?

Firstly, a few planets have been discovered around binary or trinary systems, mostly Neptune sized or larger. An example is are the two planets described in the NASA article "Kepler-47: Our First Binary Star 2-Planet System", where they are described as:

Now Kepler mission has discovered Kepler-47b and 47c, the first transiting circumbinary system — multiple planets orbiting two suns. To compound the excitement of the discovery, one of those planets is in the binary system's habitable zone (where liquid water may exist)

(A representation of the Kepler 47 system is pictured below)

The second planet discovered in the system, Kepler 47c, is within the binary stars' habitable zone, but is slightly larger than Neptune and is likely to be a gas giant - but that raises the potential for terrestrial satellites.

Another example is the Saturn sized Kepler 16b reported in the article "Weird Exoplanet Discovered Orbiting Two Stars" (Klotz, 2011), which orbits 2 stars that are smaller than our sun, thus has habitable zones closer to their parent stars, in this case, the equivalent of the Venus' orbit.

In terms of the habitable zones around multiple star systems, the article "Habitable Binary Star Systems" suggests a major advantage of a binary (indeed a trinary) system is that the combined energy between the stars could indeed extend the habitable zones, particularly,

Low-mass twins could make the best hosts, because their combined energy extends the habitable region farther away than would exist around a single star.

However, temperatures would vary significantly and the orbits would be irregular, and in simulations reported in "Double-Star Systems Can Be Dangerous for Exoplanets" (Wall, 2013) results in such disruptions that one or more of the planets therein could be ejected and sent hurtling into interstellar space. But such perturbations are likely to take a considerable amount of time (millions of years) to fully occur.

This is also discussed in "Exoplanets Bouncing Between Binary Stars" (Moeckel and Veras, 2012), where the planet in such as system is described as 'bouncing' between the binary stars, then resuming a relatively regular orbit.

The recent discovery of a terrestrial-like planet in the Alpha Centauri system, as reported in "Discovery! Earth-Size Alien Planet at Alpha Centauri Is Closest Ever Seen" (Wall, 2012) - despite this planet not being in the habitable zones of either star, this does raise the hopes for the possibility of Earth-like terrestrial planets existing in the habitable zones of other multiple star systems.

There is also the possibility that an Earth sized moon could orbit the larger planets such as those in the Kepler systems mentioned earlier. 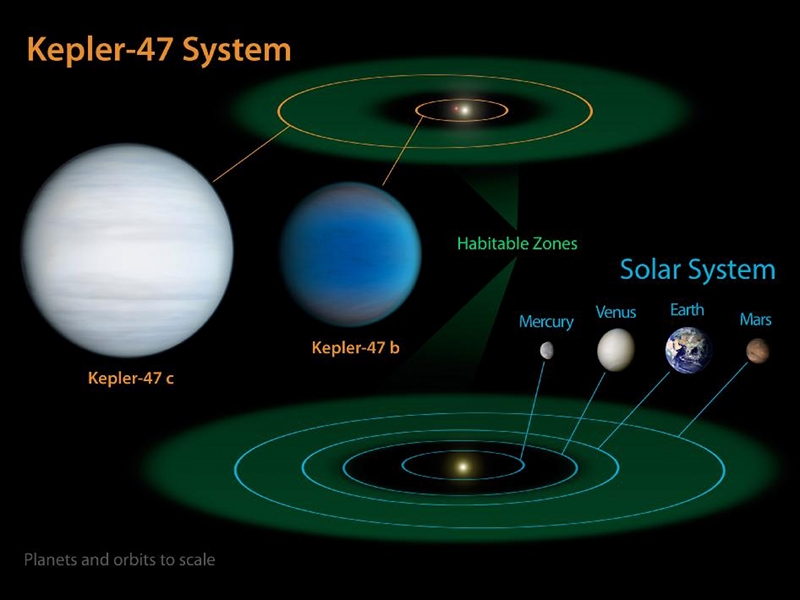 Not the answer you're looking for? Browse other questions tagged earth-like-planet habitable-zone or ask your own question.

4
Do secondary stars in binary systems affect how the habitable zone is calculated or they can be calculated separately?

4
Could we detect an earth-like planet around another star?
2
Complex life in binary black hole - Sun(s) system
2
Could a binary system of two planets with oceans reflect each other?
0
Why bother looking for Earth-like planets?
5
Trisolar syzygy and it's effects on the planet
7
Could a Trappist-like planetary system exist around a sun like ours?
2
Can a supernova or a close passing star create a transient sun gravity focus “habitable zone”?