Why did supernova 1987A's “String of 'Cosmic Pearls'” appear to be so lumpy 20 years later? Is it still?

NASA's A String of 'Cosmic Pearls' surrounds an exploding star is beautiful and the page says:

This image shows the entire region around the supernova. The most prominent feature in the image is a ring with dozens of bright spots. A shock wave of material unleashed by the stellar blast is slamming into regions along the ring's inner regions, heating them up, and causing them to glow. The ring, about a light-year across, was probably shed by the star about 20,000 years before it exploded.

Did the ring break up into "pearls" or lumps due to some kind of instability? Why so lumpy? The image was taken 20 years after the supernova was first observed, does the ring still look like this? 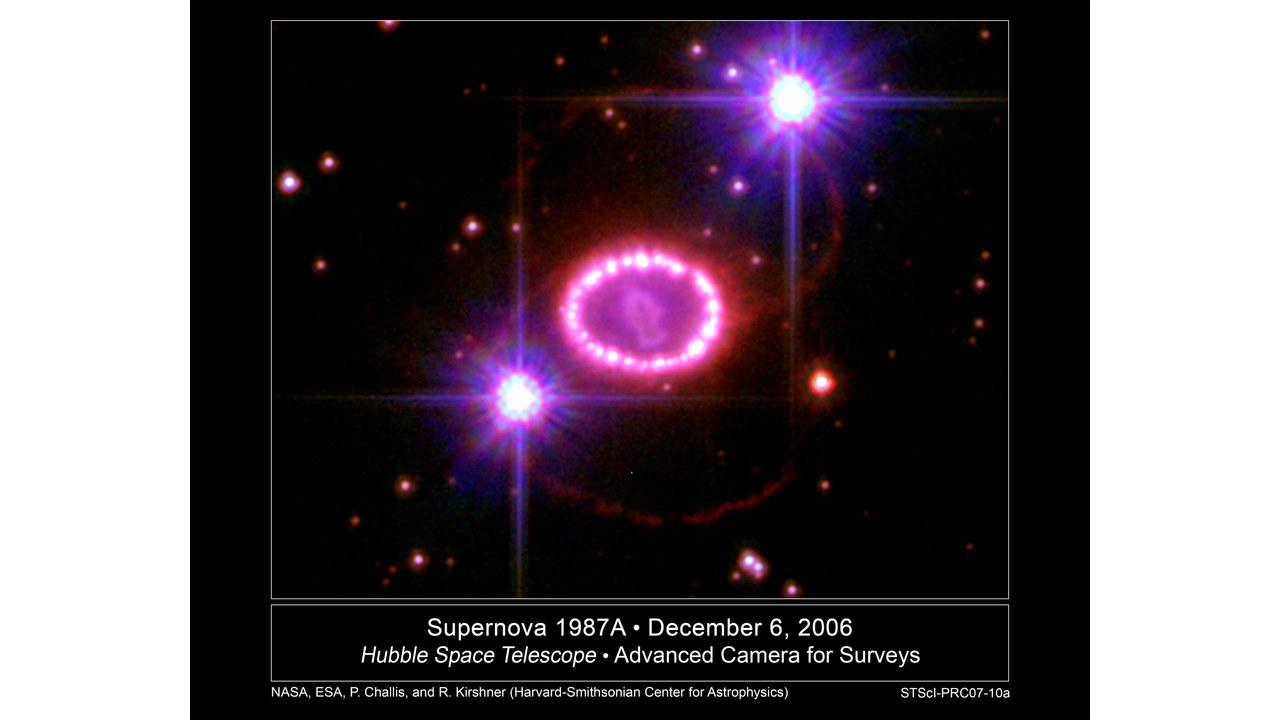 The "lumpiness" is (mostly) inherent to the ring, and is probably the result of instabilities in the outflowing gas that gave rise to it in the first place. E.g., Akashi et al. (2015):

We suggest that clumpy dense outflowing equatorial rings around evolved giant stars, such as in supernova 1987A and the Necklace planetary nebula, are formed by bipolar jets that compress gas towards the equatorial plane. The jets are launched from an accretion disc around a stellar companion.... we perform 3D numerical simulations, and show that bipolar jets expanding into a dense spherical shell can compress gas towards the equatorial plane and lead to the formation of an expanding equatorial ring. Rayleigh-Taylor instabilities in the interaction region break the ring to clumps.

What you're seeing in the image is emission due to heating from the impact of the expanding supernova shock wave. Some of the clumpiness may be exaggerated by the fact that denser clumps of gas can radiatively cool more efficiently than diffuse gas, as explained by Fransson et al. (2015):

If the density of a clump is sufficiently high, radiative cooling will cause the clump to collapse to an even higher density. The result will be an optically emitting hotspot (Pun et al. 2002). If instead, the density of a clump falls below the threshold density for radiative cooling, the gas behind the transmitted shock will radiate X-rays and very little optical radiation. This threshold density is a sensitive function of the velocity, ${{V}_{{\rm clump}}}$, of the shock entering the clump. Thus, at any given time, the requirement for radiative cooling acts as a high contrast filter, limiting optical radiation to only the denser clumps.

The brightness of the ring has faded somewhat since that image was made (more on the east side than on the west), as shown in this composite of HST images (Figure 3 of Larsson et al. 2019): 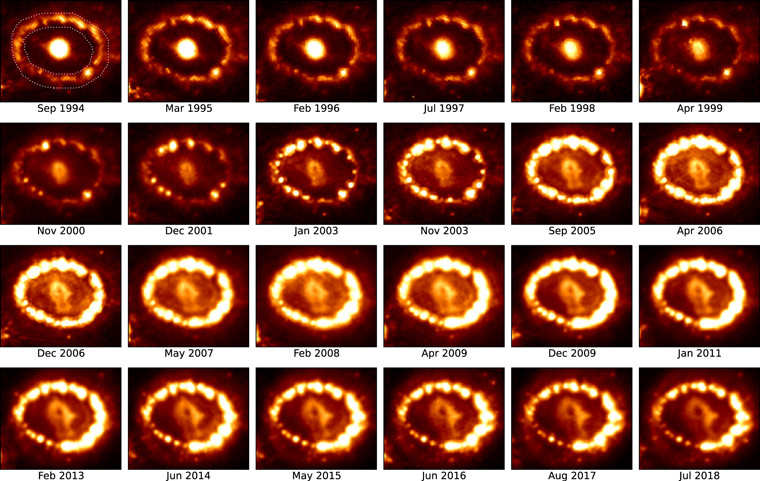 The figure in the paper itself includes an animation of the evolution.

Not the answer you're looking for? Browse other questions tagged observational-astronomy supernova disk or ask your own question.

5
Why is iron responsible for causing a supernova?
3
Why do astronomers use supernova to measure distance in space?
30
Why is there a gap in this image of supernova discoveries?
8
Is it possible to predict a supernova with years or decades of advanced notice?
9
Why does matter stay collapsed in the core, following a supernova explosion?
30
Why don’t supergiants at least start to fuse nickel into even heavier elements before going supernova?
1
Why did it take five years to “figure out” how to use astrometric calibration sources to deblur LOFAR images?
7
Why in my area does NEOWISE appear so dim and small?
10
Did I see a supernova explosion?
11
Where did the hydrogen come from in a type II supernova?