As we send up more and more satellites, it stands to reason that our view of the universe becomes more and more obscured. I would certainly expect for example that a large telescope such as the LSST would be able to see the International Space Station, and since the ISS is not transparent, it wouldn't be able to observe the patch of the sky beyond it.

How do current telescopes currently deal with satellites obstructing their view? Do they simply not observe where the satellite is? If we send up more and more satellites, does it mean that telescopes will have to focus on narrower and narrower fields of view to avoid the swarm?

Satellites, even in geostationary orbits, move with respect to the background stars and make "trails" on telescopic images that are tracked at the sidereal rate.

Removal of these can be as straightforward as taking the median of a set of exposures.

What I mean by this, is that in a sequence of exposures, the satellite trail will pollute different pixels in each exposure. Therefore if you take a sequence of exposures, tracked to keep stellar positions identical, then take the pixel-by-pixel median of the sequence of frames, the presence of the satellite will be removed. i.e. Each x,y pixel in your stacked image is formed by taking the median of the values of that pixel (scaled by the exposure time if necessary) in each image. It is essentially the same procedure by which cosmic ray strikes are removed.

Satellites already cause problems for telescopes, but not by obstructing their view. Actually the light reflected from satellites is a bigger problem, and for observations of radio waves, their communications are the really big problem.

In terms of reflected light, you might remember the controversy around the "Humanity Star" being too bright. The same applies to starlink, which this image shows really well: 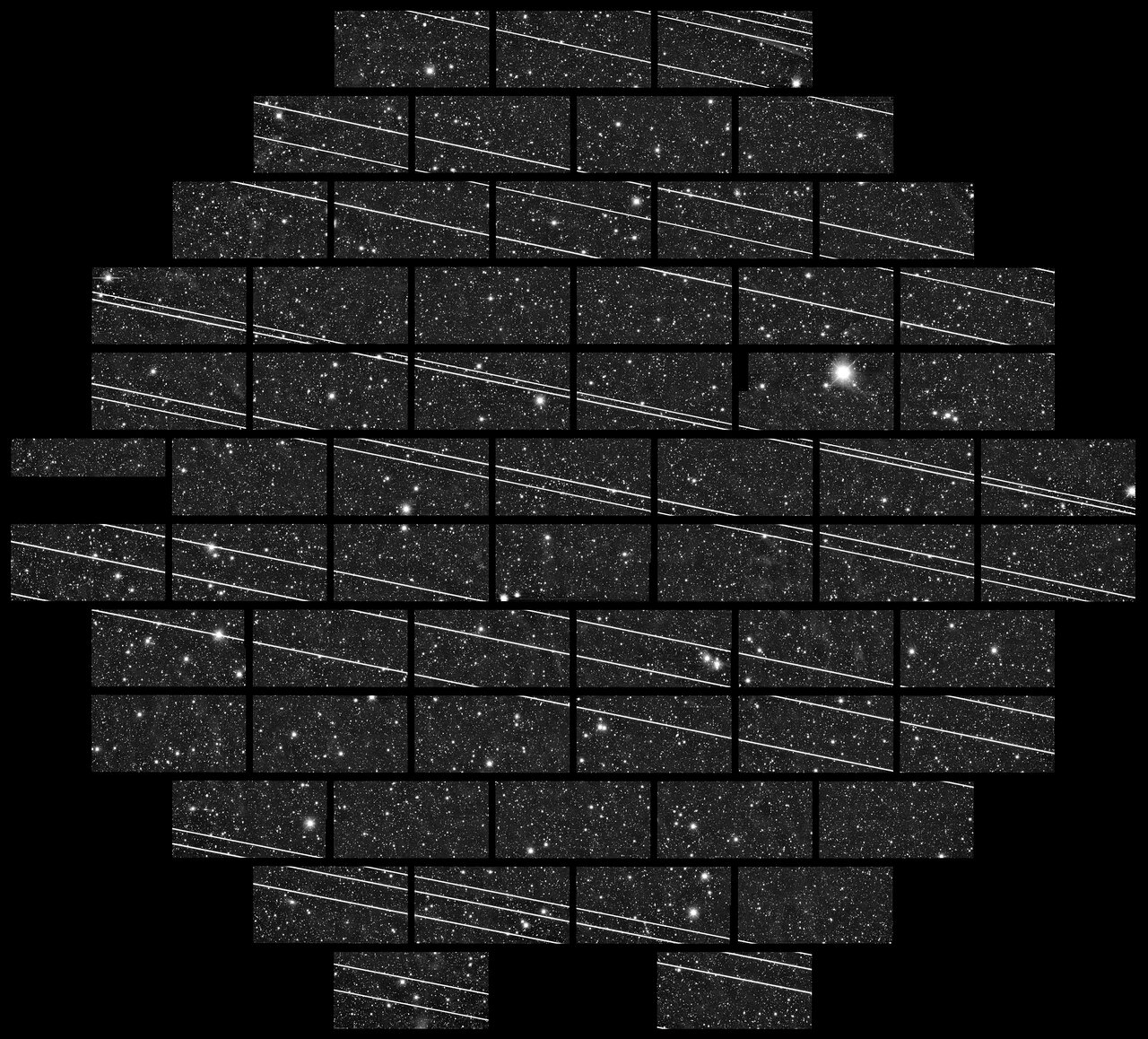 Radio wave observations are important because they allow astronomers to look the furthest back in time towards the big bang, when everything was strongly red-shifted. They are also used for measuring pulsars, and for SETI. Satellites only use discrete frequencies for communications (broadened by doppler shifting) but there are already so many communications, and signal strength is so much stronger than what we receive from distant galaxies that removing the noise is a topic of active research. Due to the long wavelengths, radio wave antennae have to be quite large, so these telescopes are usually earth based - there are not many radio wave telescopes "above" LEO orbit which would give us an untainted view.

While researching this, I read that variations in the brightness of a star are important for detecting exoplanets, and satellites blocking that light momentarily could disturb the measurement. I would have expected that the timescales for the satellite and the planet to be blocking the light would be different enough that you could filter that out - but it would be an additional noise source for what is already a very sensitive measurement.

Not the answer you're looking for? Browse other questions tagged observational-astronomy telescope artificial-satellite or ask your own question.

21
How will Starlink affect observational astronomy?
2
How bright are geostationary satellites due to reflected sunlight?

14
Will LSST make a significant increase in the rate of astronomical event alerts?
4
How will microshutter arrays be used in the James Webb and future space telescopes?
18
Did nobody in the Astronomy community think 12,000 new satellites in LEO might be a problem?
3
Visible satellites real time position API
2
How bright are geostationary satellites due to reflected sunlight?
1
How did I flip some mirrors around in the dark at 3 AM and change the focal length of a 24 inch Boller and Chivens?
5
Can the transit of satellite in front of Sun be visible in 10-inch telescope?
5
What can I see with different apertures?
6
Could someone explain what is wrong with my telescope, and what should I be able to see with it?