Why does a planet rotate and revolve?

Why do planets rotate and revolve in the universe?

As the planets evolve during their protoplanetary stage and accrete materials from the protoplanetary disks, which are gravitationally collapsing interstellar dust and gases, these accreted particles retain some of the angular momentum from the materials they form from and being in constant motion. 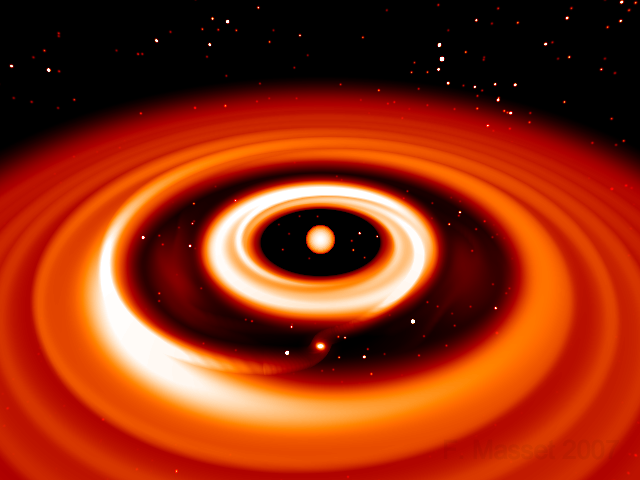 Generated image (virtual fly-by) from a simulation of the accretion period of the protoplanetary disk, showing preservation of
angular momentum in the orbit around a Jupiter-size planet, as it clears its neighborhood. (Source: Frédéric Masset)

One nice description for this angular momentum preservation, and why the planets appear to rotate faster than their surrounding protoplanetary disk goes like this:

Conservation of angular momentum explains why an ice skater spins more rapidly as she pulls her arms in. As her arms come closer to her axis of rotation, her [rotation] speed increases and her angular momentum remains the same. Similarly, her rotation slows when she extends her arms at the conclusion of the spin.

Source: Scientific American article on Why and how do planets rotate? (George Spagna)

The disk flattens from a 3d cloud to a 2d disk. A ring forms from a disk over-density band, reducing to a nominally 1d ring from a 2d band. The ring particles fall towards each other around the ring, and such attractions cause the ring to contract its circumference. The ring thus migrates inwards from the disk to the sun.

Finally the ring collapses to one remaining particle which is the planet hatched by the ring. Moons are remaining large particles in the ring distant from the planet. Once the planet has formed and any remaining moons have bound themselves the planet, the ring no longer exists, leaving a planet and its moons if any in a stable orbit around the sun. Later other planets form from other over-dense bands of the disk.

Newton’s Law of universal gravitation and Kepler’s Law of planetary motion describes the movement of planets around the sun. Equations are derived from these laws and hence the birth of Celestial Mechanics. But nowhere in the literature can we find an accepted law of Planetary Rotation because everyone is convinced that there is nothing special about the rotation of the planets. Except for the “overused” explanation…

“A long time ago in a galaxy far, far away...spinning gas and dust flattened into a protoplanetary disk and due conservation of angular momentum the planets are now rotating with RANDOM velocities”

It’s the same as saying we don’t really know how it works. We have a concept but not enough to express it in numbers.

Follow the below link for the Planetary Spin Equations.

Not the answer you're looking for? Browse other questions tagged planet universe rotation or ask your own question.

1
Why are the planets moving?
3
Why the Earth revolves?
0
Why aren't planetary bodies static?
0
Revolution of Planets
87
Does the Sun rotate?
6
How did the authors of Surya Siddhanta find the diameters of other planets in the solar system?
3
Why is the universe full of spinning objects?
3
What makes the Earth rotate infinitely around its axis?
0
Which force makes planets to continuously revolve around their parent star?

87
Does the Sun rotate?
21
Why are orbits elliptical instead of circular?
34
Why do (most of) the planets rotate counterclockwise, i.e. the same way the Sun does?
10
Why do planets tend to rotate in the same direction although they have formed from tumbling asteroids?
5
Why the comets can cross the orbits of planets?
2
Which direction do the constellation revolve in?
43
Why does the Sun have different day lengths, but not the gas giants?
24
What makes protoplanetary disks start rotating? (Initial energy needed to rotate)
13
Is it at all possible for the sun to revolve around as many barycenters as we have planets in our solar system?