How did Jocelyn Bell Burnell discover the periodicity of CP 1919?

in 1967, a radio signal was detected using the Interplanetary Scintillation Array of the Mullard Radio Astronomy Observatory in Cambridge, UK, by Jocelyn Bell Burnell. The signal had a 1.337302088331-second period and 0.04-second pulsewidth.[4] It originated at celestial coordinates 19h 19m right ascension, +21° declination. It was detected by individual observation of miles of graphical data traces. Due to its almost perfect regularity, it was at first assumed to be spurious noise, but this hypothesis was promptly discarded. The discoverers jokingly named it little green men 1 (LGM-1). 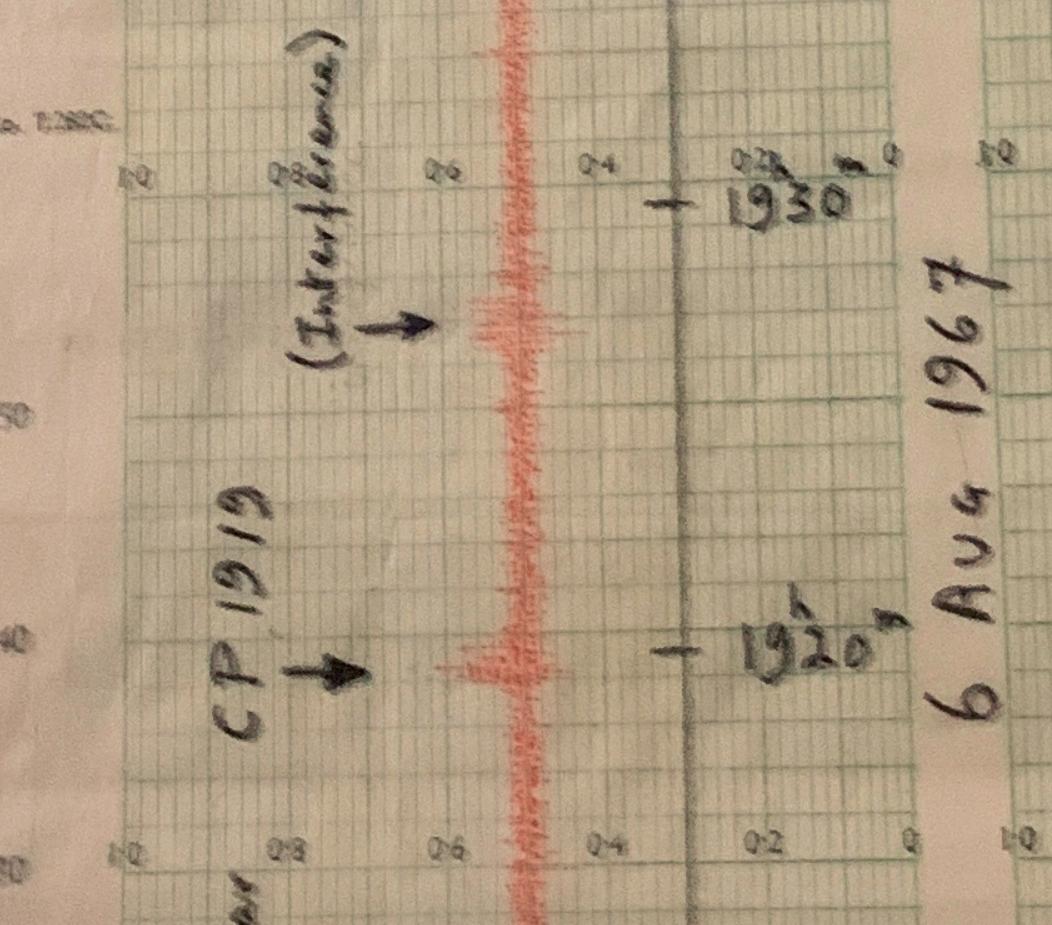 My question is the signal was just measured from the chart directly?

How did Jocelyn Bell Burnell discover the periodicity of CP 1919?

Supplemental to @RoryAlsop's answer refer to Astrobytes' The First Pulsar which discusses the Nature paper (A. Hewish, S. J. Bell, J. Pilkington, P. Scott, and R. Collins 1968) Observation of a Rapidly Pulsating Radio Source and shows Figure 2 from the paper.

For more on the radio telescope itself see What exactly is interplanetary scintillation; what was the Interplanetary Scintillation Array looking for? Did it successfully observe any?

The original is still paywalled but Nature has reprinted a bit of it here. It can also be downloaded from Researchgate.

Here is a detail of the image from the Astrobytes post and the caption there. 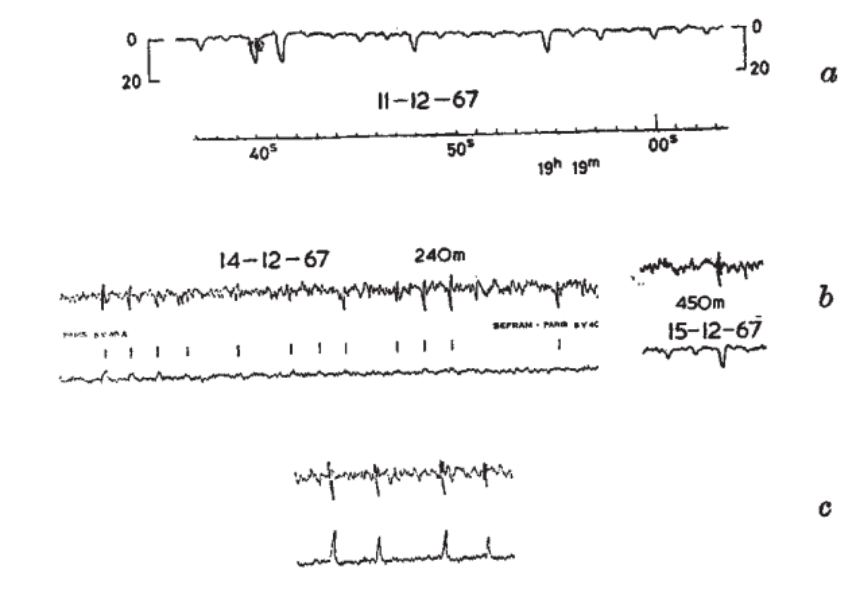 Figure 2: Data from the Interplanetary Scintillation Array (IPS) radio interferometer at Mullard Radio Astronomy Observatory in 1967. The periodic increase in flux is on the scale of seconds and show the very first measurements of a pulsar.

Here is the actual caption from the original Nature paper. What's interesting to see is that in addition to using the speed of the chart recorder as a timebase, an external pulser was used for reference. Also notable is the delay between pulses at one frequency and another, which the authors discuss and attribute to dispersion in the interstellar medium. They see about 0.2 second delay between 80.5 and 81.5 MHz and cite a -4.9+/- 0.0-5 MHz/sec frequency sweep. Using 0.2 electrons per cm^3 the mention an upper limit for the distance as 65 parsecs.

Fig. 1. a, A record of the pulsating radio source in strong signal conditions (receiver time constant 0·1 s). Full scale deflection corresponds to 20 x 10-26 W m-2 Hz-1. b, Upper trace: records obtained with additional paths 240m and 450 ml in one side of the interferometer. Lower trace· normal interferometer records. The pulses are small for l = 240 m because they occurred near a null in the interference pattern. (This modifies the phase but not the amplitude of the oscillatory response on the upper trace.) c, Simulated pulses obtained using a signal generator. d, Simultaneous reception of pulses using identical receivers tuned to different frequencies. Pulses at the lower frequency are delayed by about 0.2 seconds.

Yes - at that time, the chart was the source of data used for analysis. Jocelyn visually reviewed hundreds of metres of traces every night looking for quasars (the reason the Interplanetary Scintillation Array was built)

The wiggle looked different from expected signals, and in fact was misidentified as interference at first, but when she noticed it again, and again, she conducted further analysis, identifying its repetition rate of 1.337 seconds.

From the New Yorker:

Bell Burnell - who analyzed the roughly seven hundred feet of paper generated each week as galactic radio waves were recorded in inked peaks - noticed a faint signal arriving from one slice of sky. Then it disappeared. In November, she saw it again. By adjusting the speed of the recording device, she determined that the signal came in every 1.34 seconds, a regular beat against the background static of the cosmos.

All from visual measurement of the trace!

Not the answer you're looking for? Browse other questions tagged radio-astronomy pulsar or ask your own question.

6
Brightest Radio Source In the Universe
5
How did the Hulse-Taylor Pulsar Provide Confirming Evidence of General Relativity?
6
How to tell a pulsar is rotation-powered or accretion-powered?
8
How did the object CO-0.40-0.22 get its name, and how is it distinct from CO-0.40-0.22*?
3
How are pulsars detected from Earth?
2
How do I download PSRCHIVE and Tempo2 for pulsar timing on Mac Mojave?
7
What exactly is interplanetary scintillation; what was the Interplanetary Scintillation Array looking for? Did it successfully observe any?
5
How bright is the Crab Pulsar's 30 Hz modulation in visible light? What color is it?
5
How do we know pulsars have two beams?
6
Do the neutrons in neutron stars emit the radio waves?