Why does this large Newtonian telescope's front cover have two or three holes in it?

The Michael Bernardo video How to use an Equatorial Mount for Beginners shows a large Newtonian telescope on an equatorial mount.

The cover of the telescope's large aperture shows what looks like three holes each with its own removable sub-cover, but I might be misunderstanding what I'm looking at, perhaps the "central object" is just a handle to rotate the cover when the other two holes are open.

But that raises the question "why two holes" rather than just one. I'm pretty sure that these are not used for this kind of thing but it would be great to know how they are used! 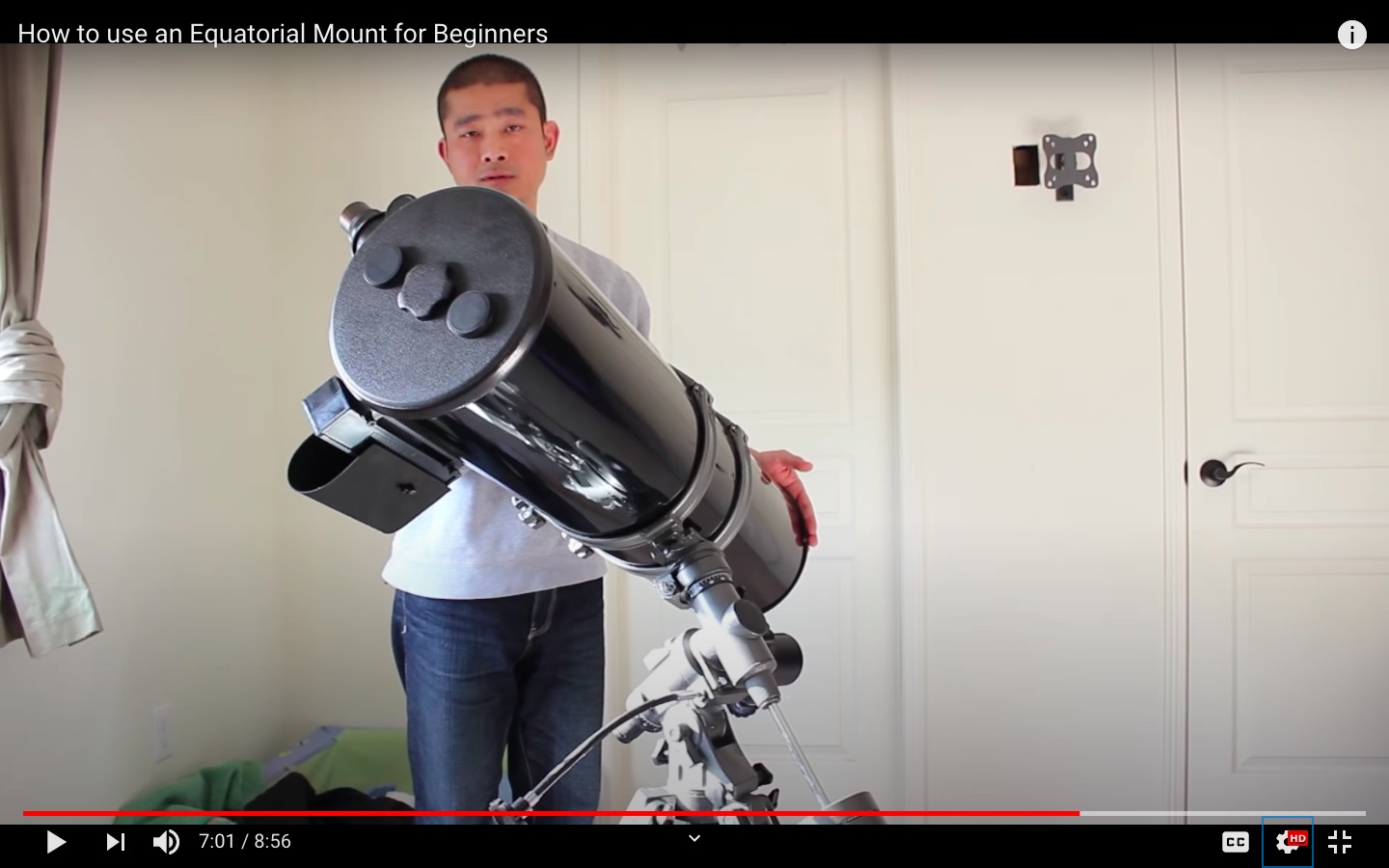 These are used to reduce the aperture of the instrument. While you see three in this image, likely only one is removable.

The instrument appears to be a Newtonian reflector. Which means it would have a secondary mirror near the front (and center). So the thing that looks like a knob in the center of the telescope cover is probably just for grip (and not likely removable).

One of the off-axis caps is probably actually a cap. That can be removed. The other thing that looks like a cap is typically non-removable. It is a holder for the cap on the opposite side (the one that can be removed).

If you observe a bright object. Such as the Moon. You can use this to reduce the total amount of light.

Solar filters are large aperture telescopes will often employ the same idea. The Sun is plenty bright. Collecting "enough" light isn't the problem. By using a solid cap with an off-axis (off-axis only because it is necessary to avoid the central obstruction in the telescope) can help limit the total energy entering the telescope to avoid over-heating internal components and damaging the instrument.

While the image cannot tell whether one, two or three of the caps are removable two or three things can be said of what would be sensible:

The central one likely is not removable as it is where the obstruction for the central secondary mirror sits.

The other two - hopefully - are removable. Ideally those would be three openings forming a equally-sided triangle, but two will do for most purposes: The optical resolution of an instrument depends on its aperture - which is not the area but diameter even when parts are obstructed: $\theta = \frac{\lambda}{D}$ where $\theta$ is the angular resolution (an important property of telescopes) and $D$ the aperture. Resolution is independent for directions. Thus with two openings, you keep the resolution of the original apperture in one dimension, but have the resolution of a single small opening in the perpendicular dimension. Using three small openings keeps the resolution equal in both directions of the focal plan while still reducing the clear apperture considerably.

You'd want to use a front cap like that shown with removable caps for the holes when you want to observe the sun. You can apply sun filters to the smaller holes and still have a nearly-identical optical resolution of the telescope as at night. And at the same time you save a lot of possibly expensive sun filters. Also, assuming usual sun-filter foil for filters you would be minimizing the risk of hazard due to damaged sun filters as for those a larger filter is easier damaged by handling than two small ones). The Price argument would be even stronger if you assume ND filters instead of self-made filters with optical sun-filter foil. Ideally you'd have 3 equally-spaced caps so you don't loose resolution in one direction.

Keeping the size of the aperture makes sense for amateur telescopes, too: with 5cm aperture one gets a resolution of 2 arc seconds, with 20cm you have 0.5 arc seconds, with 50cm aperture one gets 0.2 arc seconds. Assume a typical DSLR camera with about 5500 pixels width and a telescope with 2m focal length. That gives an angular pixel resolution of 0.4" - that's well below the 2" for a 5cm aperture, but of the order of the optics for a typical 20cm aperture - typical for a C8 or similar. Wikipedia gives best seeing conditions as 0.4" - so being able to resolve that optically makes sense for such instruments - or they would waste their potential. It's not unheard that amateur astrophotographers take their equipment to like La Palma or Hawaii in their holidays to profit from good environmental conditions... However, generally we want the atmosphere to be the limit, not the optics, so that we have the chance to get good results in good conditions or even via lucky imaging as possible on bright objects, especially like the Sun.

I've seen telescopes where both outer caps could be removed, and some where one was just fake.

Not the answer you're looking for? Browse other questions tagged observational-astronomy telescope amateur-observing optics or ask your own question.

2
What equipment and techniques were used to study Betelgeuse's diameter in 1920?

1
Why don't Australia/Russia have large optical telescopes?
3
Telescope choice
11
How was Earth's "quasi-satellite" 2016 HO3 "first spotted" and it's orbit determined?
2
How did Johannes Hevelius' long telescope work? Why all the round holes?
8
Why does the author believe that the central mass that gas cloud HCN-0.009-0.044 orbits is smaller than our solar system?
2
Can equatorial mounts be used at lower latitudes?
6
Could someone explain what is wrong with my telescope, and what should I be able to see with it?