What are the prospects for follow-up observations of phosphine on Venus?

Today, it was officially announced that astronomers have detected phosphine on Venus via the $\text{PH}_3(0\to1)$ transition (Greaves et al 2020). While the line was found by both the James Clerk Maxwell Telescope and ALMA, and while the team is fairly confident that the detection is robust, follow-up observations would nevertheless be nice, particularly in other bands. Sousa-Silva et al 2020 note that phosphine has strong features in the 2.7-3.6, 4.0-4.8, and 7.8-11.5 micron bands, and while they're pessimistic about detecting phosphine in $\text{CO}_2$-dominated atmospheres around Sun-like stars using less than ~200 hours of observing time, those numbers are for exoplanets, where we'd expect substantially lower fluxes than we'd receive from Venus.

With all that in mind, what are the most promising bands to search for phosphine on Venus, in addition to to the $1\to0$ transition? Are they the three infrared bands discussed by Sousa-Silva et al, or could other trace components of the Venusian atmosphere block the signal at some wavelengths? I see that $\text{SO}_2$ was the only remotely feasible possibility for a source mimicking the observed phosphine transition, but that would require temperatures twice as high as observed.

As a side note, it's been announced that BepiColombo will use an onboard spectrometer to try to detect phosphine on Venus during two flybys of the planet en route to Mercury. The first will be on October 15, 2020, and the second will be on August 10, 2021. I haven't been able to find out more details on the planned observations, but the spectrometer (MERTIS) operates in the 7-14 micron band. 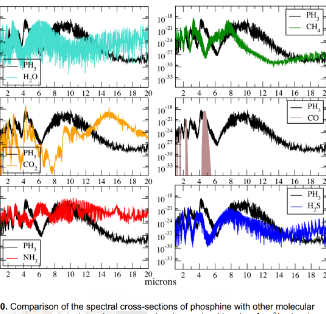 This figure is from the paper "Phosphine as a bio signature gas in exoplanet atmospheres". It shows the absorption cross section of Phosphine compared to other molecules. We can see that Phosphine has a distinct enough profile from the others molecules in the 7.8-11.5 microns range, with the exception of NH3. Probing from 2-11.5 microns should then allow to distinguish Phosphine from other molecules. Simulations seem to indicate that current state of the art nIR ground-based spectrometers could detect phosphine to a minimum of a few ppb, so expect a lot of follow-up observations from the ground in the coming months.

Not the answer you're looking for? Browse other questions tagged spectroscopy venus astrobiology .

11
Explanation for the mathematics behind Venus' retrograde motion
5
How fast does Venus move as seen from the earth?
3
What is the color of Venus if it has no atmosphere?
1
What makes the Moon and Venus shine?
2
Help understanding the false MRO observations of hydrated minerals on Mars
8
Phosphine on Venus?
6
How are sulfuric acid clouds able to completely cover Venus?