Are the Venusian "continents" likely to have existed before the global resurfacing event?

A topographic map of the surface of Venus shows the large highland areas Ishtar Terra, Aphrodite Terra and Lada Terra that have occasionally been described as "continents", plus various other smaller regions such as Beta Regio. Are these "continents" likely to have existed before the global resurfacing event, or is the topography of the planet likely to have been completely altered?

Ishtar Terra belongs to the tessera type of terrain, "one of the most tectonically deformed types of terrain on Venus", representing ~7.3 % of Venus' surface (Ivanov & Head 2011, Global geological map of Venus). Tessera are "dated" (relatively, from stratigraphic relationships) from the Fortunian, the oldest period:

The most important features of the Fortunian are large tessera-bearing crustal plateaus (e.g., Fortuna, Ovda, etc.) that form a specific class of first-order (a few thousands of kilometers across) highs on Venus [...] The lowest stratigraphic position of tessera and its relative abundance show that this unit is of extreme importance as a probable ‘window’ into the geological past of Venus. 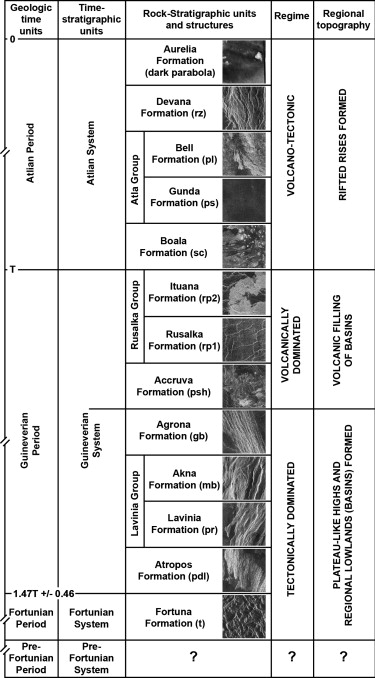 Stratigraphy of defined and mapped geologic units on Venus. The visible geologic history of Venus consists of the Fortunian, Guineverian, and Atlian Periods. The major portion of the surface of Venus (about 70%) was resurfaced during the Guineverian Period. See text for discussion. T is the mean model absolute age of the surface

Further works by Ivanov & Head detail the history of volcanism (2013) and tectonism (2015) on Venus. They consider tessera themselves as a resurfacing process:

So, to summarize, "continent-like" (tessera) terrains like Ishtar Terra have existed for a long (yet unknown) time, and have survived the resurfacing from volcanism that covers most of the surface today. But they are themselves considered to represent a (tectonic) resurfacing process that has affected older (and unknown) pre-Fortunian terrains. 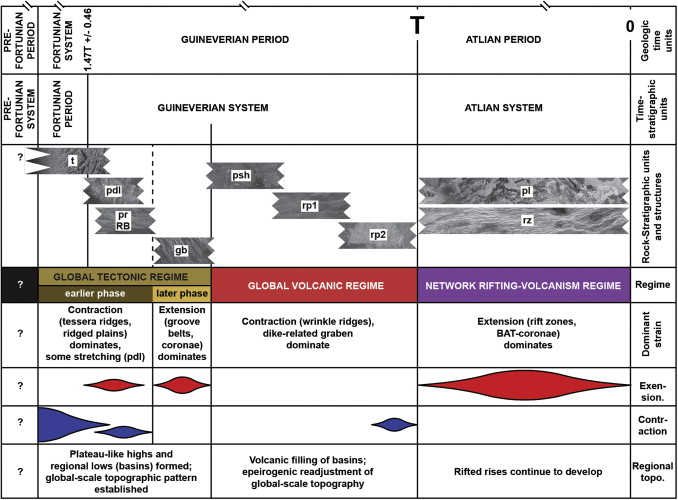 NASA's Magellan spacecraft mission discovered that Venus has a geologically young surface with a relatively uniform age of 500±200 Ma (million years). The age of Venus was revealed by the observation of over 900 impact craters on the surface of the planet. These impact craters are nearly uniformly distributed over the surface of Venus and less than 10% have been modified by plains of volcanism or deformation. These observations indicate that a catastrophic resurfacing event took place on Venus around 500 Ma, and was followed by a dramatic decline in resurfacing rate.

In the same paragraph :-

Based on its surface features, it appears that Venus is tectonically and convectively alive but has a lithosphere that is static.

(Some emphasis on 'lithosphere is static')

The above paragraph makes it less likely that the Venusian 'Continents' could have existed before the resurfacing event, but we cannot be sure that the same rules applied before the event.

I also found this website that says that doesn't really say anything about 'continent'-like things before the resurfacing event, but it says that the event might have :

"turned off" any plate tectonics on the planet, completely solidifying the crust into a single surface.

This means that any further resurfacing events would be unlikely.

Couldn't find any papers on the same though.

14
Why are most lunar maria on the visible side?
2
What are these faint streaks on the moon?
9
What implications does younger volcanism have on the Moon's thermal evolution?
0
Do we have knowledge of the geology of the moon?
6
What mechanism could have formed the Moon's Oceanus Procellarum rift-like gravity anomalies?
0
Can young surface of Venus be caused by early oceans instead of global resurface event?
0
Why are we so quick to proclaim the geological inhospitability of other planets based on extremely minimal information?
3
Why do Venus, Earth, and Mars have tall volcanoes, but the Moon, Mercury, and Io don't?