What other hints of possible life in Venusian atmosphere have we dismissed?

Now that phosphine has probably been discovered in relatively large quantities in the Venusian atmosphere, I heard that there have been other unexplained phenomena (i.e. dark patches) seen. Does anyone here know of reliable sources with such information?

I heard that there have been other unexplained phenomena (i.e. dark patches) seen.

Yes, dark patches has been observed on Venus from quite a time. Scientist aren't able to figure it out and are speculating to be clouds that are absorbing UV light thus making it look dark. Some suggest uneven mixing of clouds creating dark and light spots or some unknown chemicals present or even a sign of microbial growth.

These "dark patches" are later named "unknown absorbers" because they absorb large amounts of solar radiation.

What makes the patches dark? Why is it dark?

The dark patches are made up of concentrated sulfuric acid and some unknown chemicals that is absorbing the UV radiations making it appear dark. Scientists have claimed the chemicals to be some forms of sulfur, disulfur dioxide or ferric chloride.

These dark patches seems to affect Venus's climate by affecting its albedo. The clouds absorb solar radiation, which causes temperature changes that affect wind patterns and this affects albedo (how much energy is reflected back to space). If we talk about numbers then, Venus’ albedo had been observed to diminish by about half between 2006 and 2017, before then returning to normal. This affected the upper atmosphere, including variations in the “super-rotation,” which is driven by winds exceeding 200 miles per hour (322 kph). 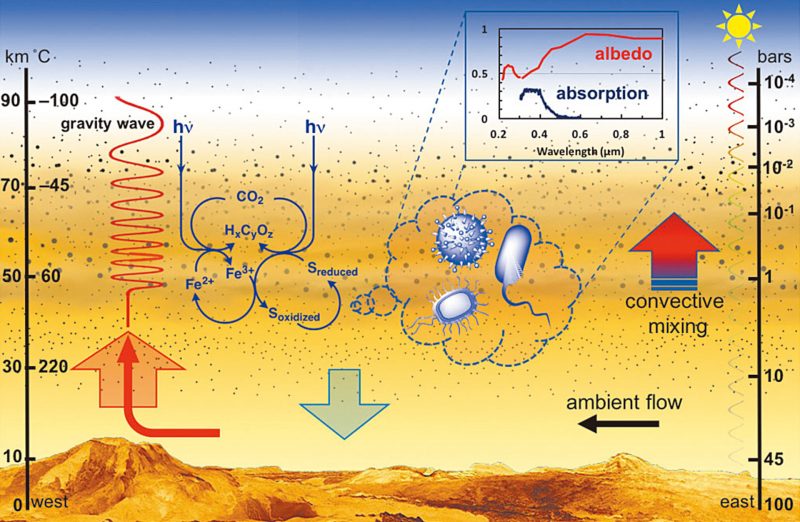 It is also further noted that around 30 miles (48 km) above the planet's surface is a lower cloud layer with temperatures around 60° C (140° F) and pressures similar to that of Earth and it is hypothesized that there is some sort of microbial life or algal bloom that is absorbing light and radiation and causing the dark color.

Not the answer you're looking for? Browse other questions tagged life planetary-atmosphere or ask your own question.

6
How are sulfuric acid clouds able to completely cover Venus?

2
What is the probability that there is life on other planets?
5
Do all stars have the potential to have life supporting planets?
1
Life forms in brown dwarf atmosphere
1
Life on other planets
3
Other than liquid water what factors could make way for life to be on Europa?
6
What is the underlying nature of the dark spot found on Uranus?