Would it have been possible to send a radio signal towards ʻOumuamua?

This way we can at least check if it is just a rock or any alien spaceship. If it were an alien spacecraft, then they should definitely give a radio signal in response I believe.

Answer posted under the wire during closure. Others may be able to write an additional and/or different answer as soon as two more reopen votes are cast.

Would it have been possible to send a radio signal towards ʻOumuamua?

Yes. It is certainly true that at any time, a large radio telescope or even a small transmitter can always sent a signal toward something. New Horizons can receive our signals now even though it's in the Kuiper belt because it knows when and where to listen and at what frequency.

The asteroid was quite close to us in the 2nd half of 2017, but now it's much farther than New Horizons. However if it had advanced technology it would know we were very active in the electromagnetic radio spectrum and it might be listening. If so, we certainly could have sent it a signal that it could receive.

Checking for a response is also hard because we'd need to know what frequency and when. We'd have to allocate resources, etc.

For the frequency, see also

Below: Plots of the distance of ʻOumuamua (bumpy, blue) and the New Horizons spacecraft (straight, green) from Earth as a function of years since 2017-01-01. 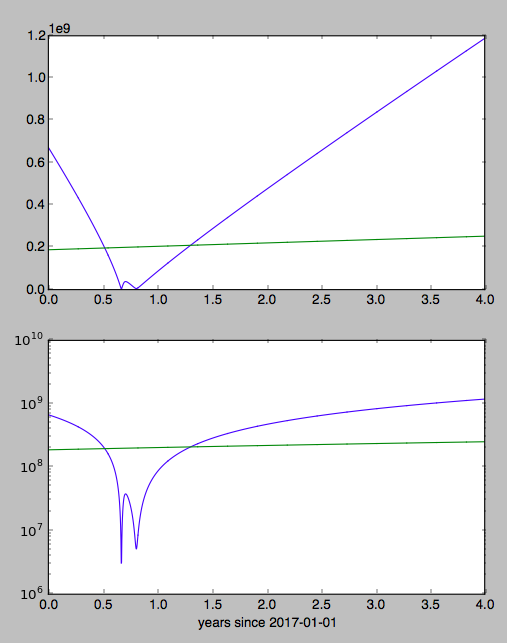 Not the answer you're looking for? Browse other questions tagged radio-astronomy extra-terrestrial trojan-asteroids fast-radio-bursts or ask your own question.

12
How did Arecibo detect methane lakes on Titan, and image Saturn's rings?
5
Why is Saturn invisible in this radar image of its rings?
7
What is the farthest object we've been able to bounce signals off of to date?
3
What is the physical geometry of this apparent “eclipse” of a tiny moon of Asteroid Florence?

8
Does the radio signal decay when it travels through the intergalactic space?
8
How should one rationally deal with the issue of space travelling alien civilizations?
8
What astronomical observations would give conclusive proof of alien life?
8
Is there any possible connection between Gamma Ray Burst and Fast Radio Bursts?
2
How far have individual stars been seen by radio telescopes?
3
Would “layered” radio interferometry work?
3
Is it possible to filter radio-waves using another radio telescope?
2
Looking for a routine to correct for Local Standard of Rest (LSR)