Has the Oort cloud moved?

Planets have migrated throughout the history of the solar system, and some planets could even have swapped positions. Assuming the Oort cloud does exist, has it always been at its current distance from the Sun? Or did it used to be closer? Or further away?

The Oort cloud is more of a theoretical construct. It's a catch all, in effect, for small icy fragments anywhere from 2000 AU to over 100,000 AU.

The Oort Cloud lies far beyond Pluto and the most distant edges of the Kuiper Belt. While the planets of our solar system orbit in a flat plane, the Oort Cloud is believed to be a giant spherical shell surrounding the Sun, planets and Kuiper Belt Objects. It's like a big, thick bubble around our solar system, made of icy, comet-like objects. The Oort Cloud's icy bodies can be as large as mountains — and sometimes larger.

While the inner edge of such a cloud may have been closer or further in the distant past, as it has been disturbed by the planets, the idea of that region of space having icy planetesimals that may become comets doesn't really have any physical constraints other than those that Opik-Oort decided upon, unlike the Kuiper Belt, which does have measured boundaries.

Image of Oort Cloud from study.com: 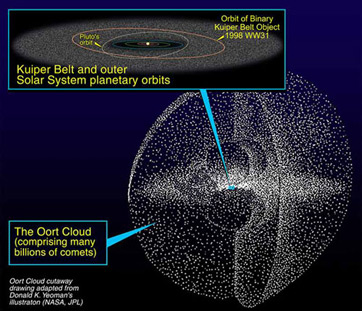 Not the answer you're looking for? Browse other questions tagged orbital-migration oort-cloud or ask your own question.

5
Can the order of planets change in a young planetary system?

17
What reason is there to doubt the existence of the hypothesised planet Tyche in the far distant solar system?
47
Where does the Solar System end?
23
Why is the Oort cloud presumed to be spherical?
7
Is it accurate to compare comets to clouds and rain?
19
How has the Earth's orbit changed over hundreds of millions or billion of years?
28
How is it possible that we haven't discovered anything in the Oort cloud yet?
1
Are there actual asteroids in the Oort cloud?
3
Could Mercury be a some kind of Chthonian?