Why can't we point the centre of the universe from inflation graph we see? 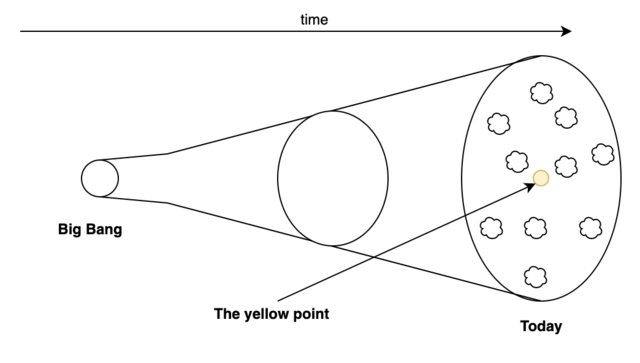 What's the problem with the figure or my understanding?

That diagram does not depict the entire universe. At most, it depicts the history of what is now our observable universe (specifically, a 2D slice through it), with us at the center only because we're observing it. Someone at the furthest reaches of that portion of the universe would see us at the furthest reaches of their observable universe, and themselves at the center.

And like us, they would observe the universe to be expanding away from them, and doing so equally in all directions. This, as far as we can determine, is true for anywhere within the observable universe. The simplest assumption is that it continues to do so outside it as well, and there is no evidence that it does anything else.

the expansion of the universe is relative to where it is being observed from. Much like dots on a balloon. Its easy to point to the center of the balloon (like what the picture shows) because it is only a 3d object. But for higher dimensions we don't have the spacial awareness to understand where than center of the universe is (if there even is one)

8
Why does it make sense to say the universe has no centre?

47
What is in the center of the universe?
7
Outside of a Universe and its origin
1
Looking back in time by looking further away
1
Question about space-time
4
How long would it take to reach the edge of the reachable universe?
3
Are there expanding-universe cosmological models that do not include inflation?
3
Was Guth inflation propelled by what we now call "Dark Energy"?