Why doesn't Earth's leading tidal bulge cause the Moon to start spinning in the opposite direction than its original spin?

Please refer to the image below: 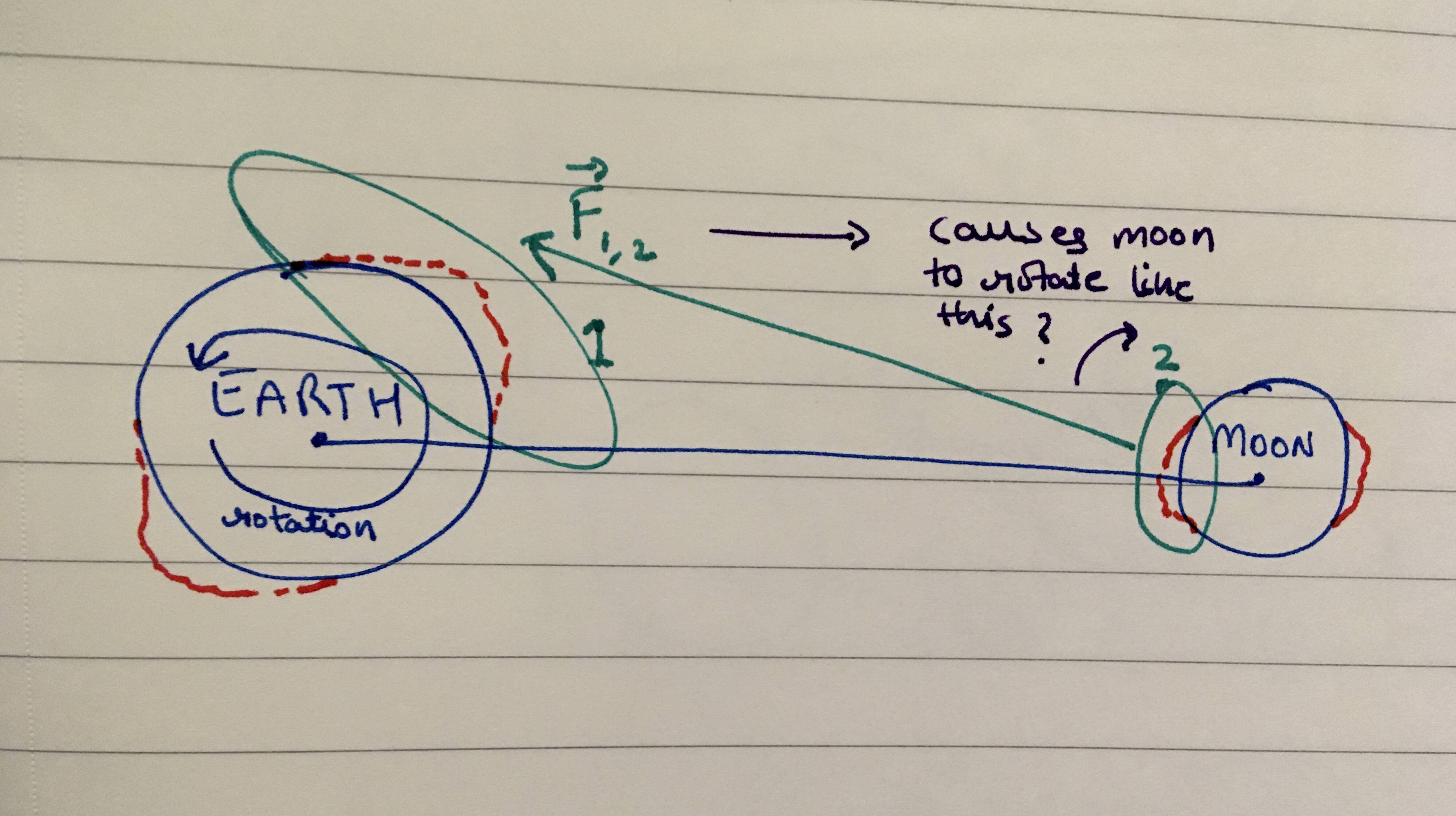 My question is, why doesn't Earth's leading tidal bulge (encircled in the green circle 1) pull on the moon's tidal bulge (encircled in green circle 2), leading to a force $F_{1,2}$, and consequently a torque on the Moon's tidal bulge, leading it to start spinning as shown in the image. This spinning direction would be opposite of the original direction of the Moon's spin, which got retarded and eventually stopped due to tidal interactions over billions of years.

Please note: I know that Earth's tidal bulge causes the Moon as a whole to increase its velocity which is causing the Moon to be drifted away from the Earth, but that is not what my question is.

leading to a force, and consequently a torque

There's nothing here that will give an ongoing torque.

Because of the Earth's high rotational speed and lag in response to forces, the earth's bulge stays displaced from the direction of net gravitational pull.

You have drawn the moon's bulge directly in line with the Earth's center. But in fact it would be pointed at the net gravitational pull direction, which includes the earth's bulge. Since the moon's rotation does not carry its distortion away from that line, there is no net torque in either direction. (I'm ignoring libration and long-term changes in rotation due to orbit raising).

So, the Earth's bulge is continuously displaced due to rotational mismatch, while the moon's bulge is not. If the moon's bulge were directed at earth's center, then there would be a temporary torque and the moon's orientation (in this non-inertial frame) would appear to pendulum back and forth, not a consistent torque that would get it spinning. (Again, I've completely ignored libration effects and assumed a circular orbit for simplifications).

It does. But it also transfers momentum to the moon which raises the orbit.

The two effects mirror each other. One tends to slow the moon's rotational speed, the other tends to raise the orbit of the moon. The consequence is that the month gets slightly longer, but the same face of the moon continues to point towards Earth.

8
When did the Moon become tidally locked to Earth?
4
What is the real position of the tidal bulge?
7
Is there any residual oscillation left from the Moon rotation?
14
How can tidal heating lower Io's orbit?
2
What is the cycle for when the maximum amount of the Moon's apparent area is sunlit?