What is the nature of bright spots found on Uranus?

The following text is from space.com which was written during the time of discovery of the first dark spot on Uranus:

During the past decade, many bright spots have been seen on Uranus in both red and near-infrared filters. But this is the first dark spot ever seen on the planet. A team led by Lawrence Sromovsky of the University of Wisconsin and including Kathy Rages of the SETI Institute, Heidi Hammel of the Space Science Institute (Boulder, CO), andPatrick Fry of U. Wisconsin, observed the dark spot on Aug. 23 using the Hubble Space Telescope (HST).

What was the nature of the bright spots? How were they formed? Was it some form of storm or vortex? I couldn't find any information anywhere regarding this.

Near-infrared pictures from the 8.1-meter Gemini North Telescope in Hawaii discovered a bright spot on Uranus. The spot is likely a tall methane cloud that reached high enough to become visible due to sunlight being scattered by its icy particles. The Uranian cloud is similar to an anvil cloud, a type of cumulonimbus cloud that's associated with severe thunderstorms. The cloud is also at a lower latitude on Uranus that could mean the spot is a storm that has migrated south. 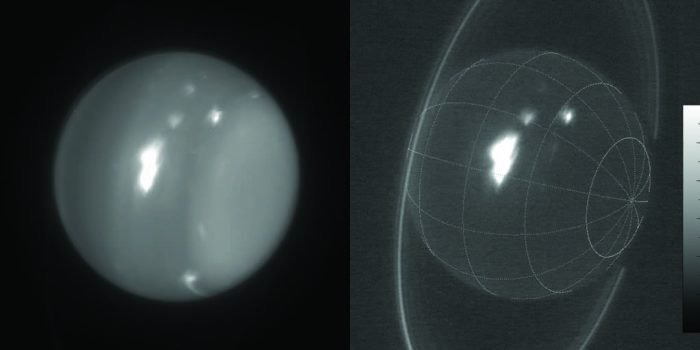 Nobody knows how were the storms created. Some has speculated that the planet's tilt is the reason for such storms.

As Uranus is tilted on its axis is tilted, it virtually rolls around the Sun on its side. For half the orbit's period, the northern hemisphere is directed towards the Sun and the other half, the southern hemisphere is turned towards the sunlight. At two points in its orbit, known as the equinoxes, the Sun shines equally on both hemispheres. At these equinoxes, storms appear to become more frequent in Uranus’s disturbed atmosphere. Stormy weather has been observed a number of times in recent years, thus creating a notably bright spot appearing in 2014.

Not the answer you're looking for? Browse other questions tagged planetary-atmosphere uranus .

6
What is the underlying nature of the dark spot found on Uranus?

27
What is the accepted theory as to why Uranus' axis is tilted so severely?
4
Before Voyager 2, what were the highest quality photos of Uranus and Neptune?
3
What kind of effects can maintain Uranus' rings' eccentricities?
11
If the axial tilt of Uranus (97°) was caused by a giant impact, then why do its moons orbit around its equator at the same tilt (≈97°)?
4
What causes the strong winds on Uranus?
2
What does the amino acid found in the atmosphere of Venus mean?
6
What is the underlying nature of the dark spot found on Uranus?