When does a solar eclipse become noticeable?

For a human viewer located on Earth, is there an approximate apparent magnitude at which a solar eclipse becomes apparent in the form of a noticeable change in ambient brightness?

Note, I am not interested in the noticeability of the Moon covering the Sun, but whether someone outside would think, "Hey, it looks darker than usual today!"

It's hard to say because the situation is very similar to this question:

How much of the Sun's disk must be covered for a visible shadow to be cast?

The major problem lies in the sensitivity of the human eye, which is able to detect illumination changes sooner or later. Basically, there are people, who might not know about the ongoing solar eclipse until 98% obscuration! This is driven by the aforementioned human eye sensitivity and the surrounding scene, which keep seemingly the same level of illuminance for an observer. I did a few observations both in solar and lunar eclipses and I have basic advice for you: try to remember the brightness of your scene at the very beginning and watch carefully how it changes against objects illuminated by other light than sunlight. If, for instance, you are watching the eclipse outside, but close to the building, which rooms have a light turned on, you can try to detect this artificial light on the surface underneath this window (especially when it's placed in the shadow).

However, I assume, that for this purpose you will use a camera. In your device, you can set fixed image parameters and take the snaps at the same time intervals. Afterward, you can see how they vary from each other as the eclipse progresses.

See what I did for the lunar eclipse

The solar eclipse is analogous.

In the detection of the "visual start" of the solar eclipse, some amateur measurements can be helpful. You can install some light measurement applications on your phone. Some examples of use and pros & cons you can find here:

The smartphone headed towards any part of the sky should show how the level of light in your area changes as the eclipse progresses. With help of the images mentioned above, you will be able to detect the "beginning of visual eclipse visibility". Another example (also for lunar eclipse) you can find here:

and for a solar eclipse is here:

with visual examples I did myself 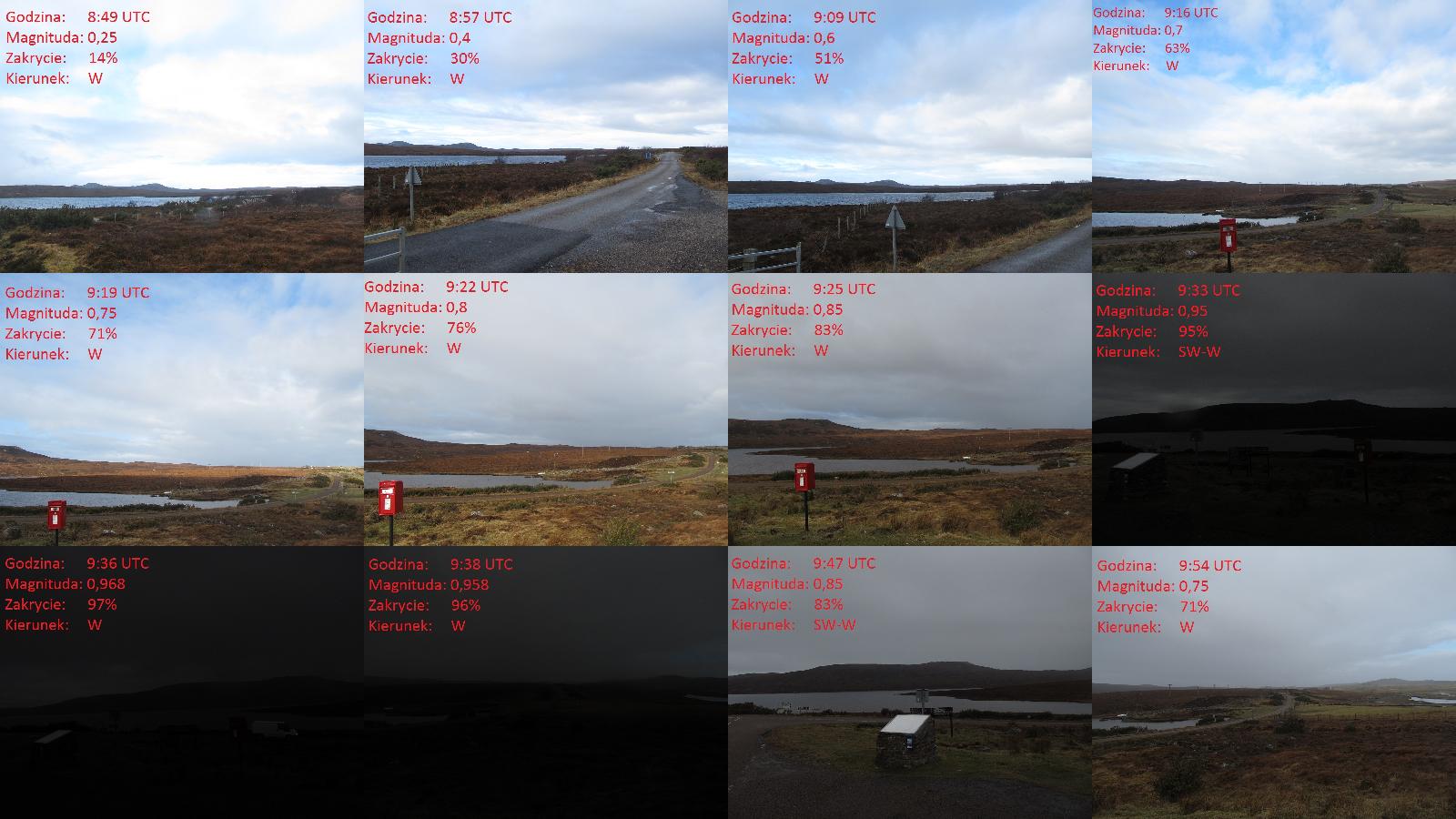 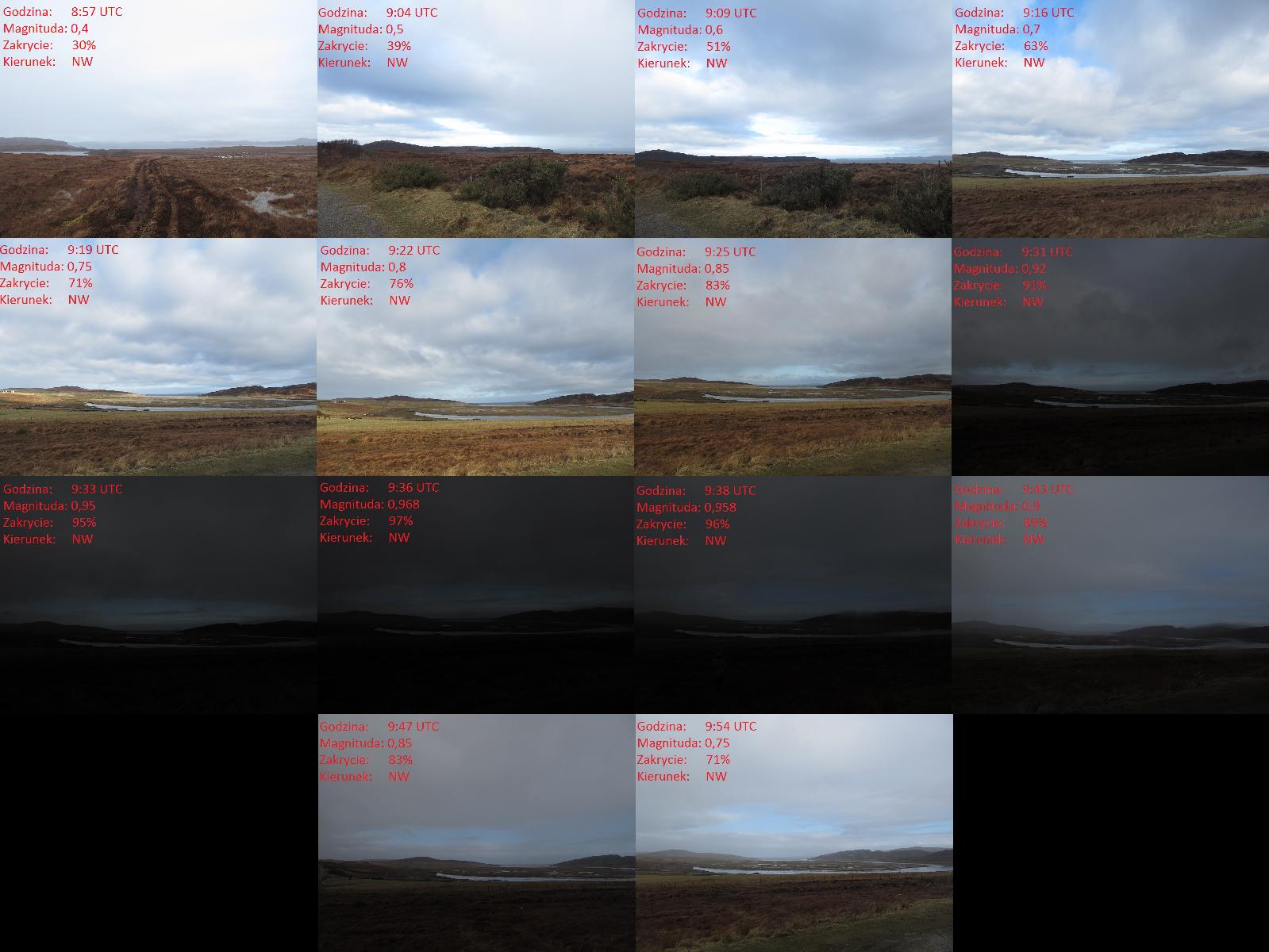 while also with artificial lights, which are highly recommended during observation such this. I used car dimmed headlights, but streetlamps are undeniably the best, because you can see also their light reflected from the ground, when gets darker. 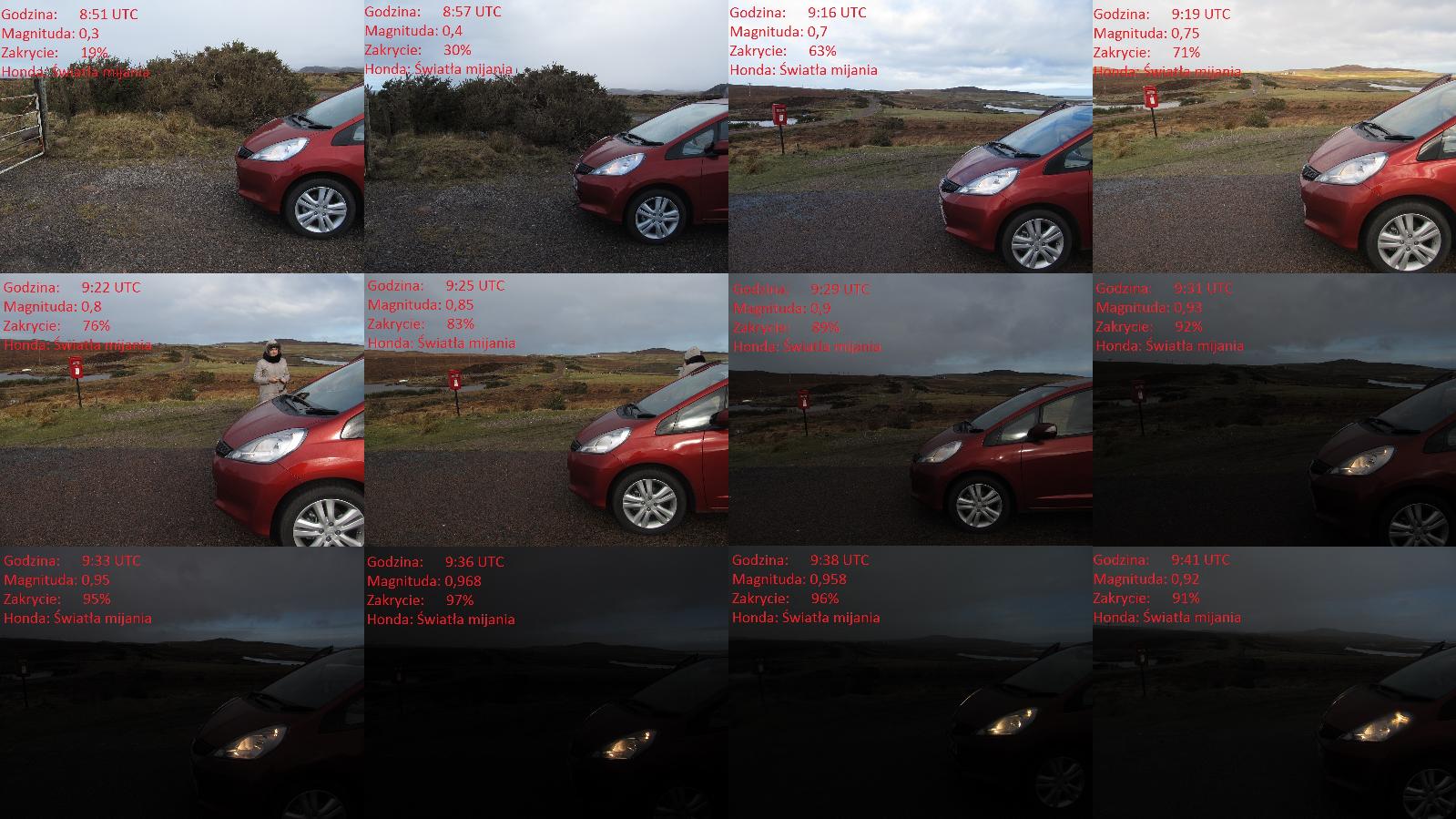 Bear also in mind the cloudiness. The observation above was carried out under the mostly overcast sky. In this case, clouds reflect the sunlight, hindering it from further way down to the ground. In turn, it's darker than it could be under clear skies. When the eclipse occurs along with some thunderstorms passing above your observation place, then it's extremely hard to define, when the eclipse-driven conditions started to be noticeable, as very thick clouds can reduce the sunlight up to 1000 times. Read more details here:

Not the answer you're looking for? Browse other questions tagged solar-eclipse apparent-magnitude magnitude brightness or ask your own question.

3
How much of the Sun's disk must be covered for a visible shadow to be cast?